In December 2019, Harvard’s graduate students went on strike, demanding better pay, robust health benefits, and a more reliable harassment grievance process. The Independent spoke several times to Matt Volpe, a member of the HGSU-UAW union and fourth-year graduate student in the Chemistry department, to see how his feelings about the union’s efforts changed as the strike went on. He told us a tale of a union which went on strike to achieve very particular goals in a very particular contract, but ended up benefiting much more from the growth, both internally and in their relationships with other labor groups, afforded by the increased visibility during the action.

Speaking during the first week of the strike, Volpe was optimistic. Already, he said at the time, it had achieved at least one important aim. He is not a member of the HGSU-UAW bargaining committee, but he had observed some of their meetings, and one argument that he had heard Harvard’s representatives put forward was that, “The things we’re trying to fight for in our contract don’t represent the interests of most of the graduate students at Harvard.” He called this “patently false,” pointing out that, “We had a massive picket line in Harvard Yard on our first day… even in the snow there were hundreds and hundreds of people out there.” The picket line in question began around 10 a.m. on December 3, 2019, and lasted until around 5 p.m., during which time I had indeed noticed both the snow and the large number of people there. 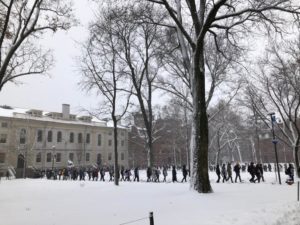 I talked to Volpe again after the end of the strike, and, while he said he had not observed any more bargaining committee meetings, he did not believe Harvard was using this argument any more. In fact, he said, “Our organization and our power and strength in numbers has only grown since the strike,” anecdotally mentioning several people in his department who went from “aware of the union but not really engaged with it” to wanting to actively join in and help out. If not a surprise, this had been at least fairly unplanned. During the first week of the strike, when I asked Volpe why the action was important, he said that “the primary things motivating this strike” were simple bargaining demands, “really key elements of our contract” over which Harvard seemed no longer willing to negotiate. When I asked him what the strike had achieved so far, he did mention seeing “a lot of community allies joining us on picket lines” and noted that cars were honking as they passed. (He took this to be a show of support; the Independent, knowing Boston drivers, refuses to comment.) However, he then went on to talk about how the strike had “caused some logistical headaches for the university” and the rest of his answer focused on relations between Harvard and the bargaining committee. To Volpe at least, growing the union was not a main purpose of the strike, but it turned out to be a nice side-effect.

However, as side-effects go, this was a pretty big one. In particular, there was a noticeable difference in the way Volpe talked about faculty during and after the strike. In our first discussion, he said that, although he had seen “really wonderful support from tenured faculty, people who have gone through the graduate student lifestyle,” he was “really frustrated by, in many cases, the real lack of engagement by tenured faculty and the willingness of some faculty to just go along with what the administration tells them to do and claim that it’s part of their job.” In the closest he ever came to anger, he said, “Harvard faculty are supposed to be these sort of free-thinking, real innovators, great minds of tomorrow, kind of people, and they have… the ultimate job security, and the fact that many of them are not willing to at least try pushing back just a little bit on what the administration is telling them about graduate students and graduate student unionization, I think is pretty disappointing.” After the strike, though, he said, “The relationships between students and faculty have remained largely strong” and that while the strike might have been “something that would drive a wedge between students and faculty,” that wound up not happening at all. “There were also some faculty… who wouldn’t make eye contact with me when they walked by,” he added, but the tone of his answer overall had completely inverted during the strike.

However, in some ways other unions were the most crucial sort of new friends. Early in the strike, the UPS union and the Teamsters decided not to cross HGSU-UAW picket lines, and Volpe mentioned this. After the strike, however, he had much more to say. “One of the best things to come out of the strike,” he said, “was the solidarity we built with other unions… both at Harvard and in the greater Boston area.” This went beyond delivery drivers: HUDS workers brought food and coffee to strikers, and some other groups even contacted HGSU-UAW more or less out of the blue. Volpe described having to turn down an offer from a faculty union at Berklee College of Music to provide a band to play at picket lines: HGSU-UAW already had too many events planned that week. The response, in Volpe’s words, was, “Well, if you guys ever need music at one of your rallies or something, please reach out to us,” which Volpe describes simply as “awesome.” HGSU-UAW representatives, including Volpe, were invited to UAW dinners honoring striking workers from across New England and Puerto Rico, where he met some of the organizers of the GWC-UAW graduate student union at Columbia. “All in all,” he says, “the strike was a really great relationship- and solidarity-building opportunity.”

This is all very easy to say only a few weeks after the strike, but, as other events have taken hold of the news cycle, the relationships formed are still holding. I most recently spoke to Volpe only a few days ago, and he said, “Since the strike, our relationships with other unions on campus [have] probably gotten stronger.” Not only that, but they have become more reciprocal, with HGSU-UAW advocating for the other unions in the ways they advocated for it during the strike. “There was a lot of organizing we did in the last few weeks… around helping to make sure that custodians and security workers got paid even after their jobs were furloughed,” Volpe said, “and one thing I’m particularly happy about [was that] we actually helped coordinate getting PPE [Personal Protective Equipment] for some of the custodians who were cleaning out the dorms with some caustic chemicals.” Harvard later provided PPE, but the initial equipment came from an effort in which HGSU-UAW actively participated.

In this most recent discussion, Volpe explicitly mentioned neither pay, nor benefits, nor harassment grievance procedures. He did say that Harvard had been “being really difficult in negotiations,” but it was clear that the priorities had shifted. HGSU-UAW is now gathering data on its members’ working situations, organizing with the Graduate Student Council and other bodies to find out how best to support student workers, and working off its connections with unions at other universities. The relationships built in part during the strike have become key to the day-to-day work of the union. HGSU-UAW and Harvard are yet to reach a contract at the time of writing, and even immediately after the strike Volpe had said, “A lot of the lofty statements that were made might not be held up,” but perhaps holding up lofty statements was never the primary benefit of the strike in the first place. Perhaps the real strike was the friends we made along the way.

Michael Kielstra ’22 (pmkielstra@college.harvard.edu) couldn’t strike the broad side of a barn with a baseball.