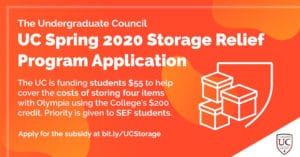 By the night of March 10, Eviction Tuesday, most academic activity had been cast aside for more important things like packing or getting drunk with no more than 99 of your closest friends. Figuring out which half of your possessions to throw out and finally peeing on John Harvard were on the checklist, but other work also had to be done. While most of us were scrambling to keep our lives from falling apart, Mini Ganesh ’22, Eliot House Representative and Chair of Finance Committee for the Undergraduate Council (UC), was trying to help us put our lives back together.

In the six days between the notice emailed out by President Bacow and the Eviction, Ganesh wrote three new pieces of legislation for the UC. One was to publish the UC Coronavirus Evacuation Information Guide, to alleviate some of the “mass confusion and concern” surrounding our hurried departure from campus. It contained all known information about things such as storage, travel, and events such as Housing Day and Commencement. In the anxious chaos immediately following the eviction announcement, it was one of the first lifelines to fill the incommunicado void that the Harvard Administration seemed to have disappeared into. Another was to set aside $20,000 of what was left of the UC budget to fund club events that had already taken place that semester and say that they wouldn’t fund any more events for the rest of the semester. This was the start of the UC Storage Relief Program.

This legislation directed all other UC funds not going toward club reimbursement to the Finance Committee for the purpose of subsidizing “summer storage and moving costs for Spring 2020 due to coronavirus-related health concerns.” The email launching the program was sent out early morning on Wednesday, March 11, by UC secretary Nicholas Brennan ’23, stated that the UC would grant $55 to help cover the full $255 cost for four boxes/items for Olympia storage the College had already subsidized $200 of, with priority given to SEF-eligible students (those receiving significant amounts of financial aid). By March 25, Ganesh and the rest of the Finance Committee members had processed more than 1,500 applications and notified recipients that their award would appear as a credit on their Harvard account by late April.

Ganesh was able to fund everyone who applied, except for one student who didn’t provide any identifying information. Despite the fact that the program was “pubbed aggressively,” being sent out in five emails over the course of seven days, beginning when the application opened on March 11 and closed on March 18, some funds were left over from the semester. The UC had several options for what could be done with the money. The money could simply be saved and used in future semesters, as the Administration suggests, unless they come up with “an equitable distribution plan.” They could also decide to provide even more funding to students, especially SEF-eligible ones, which, Ganesh acknowledges, is the “sexier” option. However, she thinks that it is even more important to think about future generations in this moment. Therefore, she is in support of  starting the UC’s own endowment fund.

The UC is granted a budget of anywhere from $370,000 to $510,000 per semester, which makes them an incredibly influential entity on campus. All of that money comes from the contentious Student Activities Fee (SAF), a $200 charge each student pays, which goes toward funding organizations and activities on-campus. Students can technically opt out of this fee, but it is not a fact well advertised by the College. Ganesh’s warning to all those who advocate for “getting your Student Activities Fee back” is that “all clubs would grind to a halt.” Even though the UC’s financial commitment to clubs is to “provide the bare minimum” necessary for events, most people end up asking them for twice as much as they can give. Despite their seemingly monstrous budget, they just “can’t fund everything.” According to the UC Treasurer, Noah Harris ’22, this is because around 30 new organizations are made each year at the same time that more and more people are opting out of the SAF.

Another constraint on the UC, besides their finite funding, is the part of the Harvard Administration that has control over them. Ganesh described it as being “notoriously unreliable,” sometimes not granting the UC their funds until late into the semester, such as November in the fall, or February in the spring. When the UC has no funds, clubs have no funds. Harris explains that this is in part because the SAF allocation has to be negotiated with the Administration, justifying their need for the money, and split between entities like the UC, College Events Board, House Committees, and Intramural Sports. After all, it’s no little thing to hand over half a million dollars to a student group.

Due to instances such as these, Ganesh hopes to make the UC a little less reliant on the University. She thinks that now is a “great opportunity to start an endowment.” With the funds that they have left over this semester, they could finally start the project that has simply been an idea for at least the last decade. Nothing has officially passed, according to Harris, but he does believe that now is a good opportunity to take the next step. He claims that the idea of a UC endowment or “emergency fund” has been being seriously considered for the past two to three years, but nothing is official. Yet. He envisions it as a source that will always be open to students, providing a little more flexibility when funds from Harvard get tied up. This will also help if the SAF fund keeps disappearing, unless Harvard decides to remove the “opt out” clause. But, Harris says, “You don’t build $500,000 overnight,” and given the funds they have left over this semester, it would take two to three years before they could get that amount on their own. But Ganesh remains optimistic. She described herself as someone who’s “just trying to get stuff done.” So while we are all still coping with the recent trauma of eviction, the current difficulties of social distancing (#stayathome), and the uncertainties of the future, we can be rest assured that there are still those who are working toward a future of hope and improvement for all.

Jen Eason ’21 (jeason@college.harvard.edu) is going to use her Harvard reimbursement to start her own “binge-watching platforms” endowment.