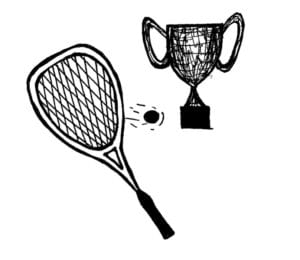 On the final day of the Potter Cup, the men’s squash National Championships, Samuel Scherl ‘21 and Adam Corcoran ‘21 kept the crowd on their toes. Going point for point in their opening rounds against rival Penn, the two Harvard matches made for the most exciting court-to-court viewing experience.

The afternoon had begun with Sean Hughes ‘20, Harvard’s number five and co-captain, taking on Penn’s Yash Bhargava ‘21. The match was an easy 3-0 for Hughes. Never allowing more than 7 points from Penn’s end, Hughes moved confidently to secure a 1-0 lead for Harvard in the National Championship. Following in suit was number nine, Ayush Menon ‘23 playing against Penn’s Ryan Murray ‘21. With another round of 3-0 wins, Menon improved Harvard’s record to 2-0.

Marwan Tarek ‘22, Harvard’s number two, played next. The first round of the match was closer than any prior that day. Going 11-9 for Tarek, the crowd was on edge as the game neared its final points. Finally in his groove, Tarek dominated the next two rounds, going 11-6 and finally 11-2 for another 3-0 match win.

Next up playing side-by-side were Sam Scherl ‘21 and Adam Corcoran ‘21, number four and number eight for the Crimson respectively. As Harvard only had to win 5 of their 9 matches to claim the national title, the set of teammates had the opportunity to end the tournament then and there. Scherl had a packed stand of spectators overlooking his tight match. The first round went to his opponent, Penn’s Dillon Huang ‘23, with a score of 5-11. Scherl, frustrated but not finished, came back on the next round unstoppable. Harvard took almost every point in the next round, going 11-1 for the set. Scherl maintained his inertia, having recovered so swiftly from the opening round, and took the next two rounds 11-3 and 11-2. Despite holding a straight face the entirety of the match, Scherl burst with excitement as he scored the last point, knowing there was only one match left until he was a two-time national champion.

The crowd only required a glance to the side to catch the progression of Corcoran’s match on their left. Having gone 12-10 for Corcoran in the first round, there was a tense tone for the match ahead. Penn’s Wil Hagen ‘20 matched Corcoran, point for point. The following set was all Corcoran, who managed to swiftly take control with an 11-5 win. Only a single round more needed to be won in order to boast the national champion title. To the crowd’s shock and dismay, the third round win did not fall into Corcoran’s hands. Hagen began to even the playing field, taking the next round 7-11 and sending the pair into a fourth round of play. Not entertaining the possibility of failure, Corcoran fired back strongly and sealed the national title with an 11-3 win.

The crowd erupted into cheers of excitement and pride for the Harvard team. This is the second year in a row the team has won the Potter Cup, and the 27th time in Harvard history. Ranked first in the nation, with a streak of 33 match wins, it was not that this championship win came as a surprise. The win rather acted as a testament to the incredible talent, efforts, and excellence that the team holds. Next for the team is the individual National Championship tournament, which will be held at Penn this upcoming weekend.

Cheers echoed at Blodgett Pool as the Harvard men’s swimming & diving team began their Ivy League Championship this past Wednesday, February 26, 2020. The team has been successful at securing the championship title for the past three years running, so the pressure was on to repeat past performances and come out on top again. Co-captain Michael Zarian ‘21 reported that the team was well aware that “there was a target on [their] backs from the first day of the season” due to the previous record of wins, but the pressure only motivated them to step up, as they “embraced the challenge, and competed together as a cohesive unit.”

The Crimson men started off strong in the first two events of the weekend, competing well in the 200 medley relay and the 800 free relay on Wednesday night. A relay team of Gunner Grant ‘23, Jared Simpson ‘23, Umit Gures ‘23, and Mahlon Reihman ‘22 set the tone in the first race of the weekend, taking second place in the 200 medley with a time of 1:26.34. Moving onto the next and only other event of the night, Reihman took to the pool again, now joined by fellow teammates Corban Rawls ‘23, Michael Zarian ‘22, and Marcus Holmquist ‘23 for the 800 free relay. Beating out the other teams by over three full seconds, Harvard took gold with a time of 6:20.96.

For Marcus Holmquist ‘23, the 800 relay was his first dive into a large collegiate conference meet. Despite the high stakes competition, Holmquist noted “not really feeling any pressure” due to it being his “first big college championship.” His calm approach to the weekend proved successful, allowing him not only to race calm and confident, but to take in “the incredible atmosphere” of the meet. Holmquist remarks, despite the big win and several other big finishes, “What was most memorable was racing in front of the alumni, family and friends.”

The competition rebooted the following morning at 11 a.m. with five preliminary races, followed by their respective finals that evening. Among the standout performances that night was Cole Kuster ‘23, who took the 500-yard freestyle title in the opening race of the night. His time of 4:18.17 bested that of second place by 0.49 seconds, bringing everyone to their feet as Kuster managed to hold off his Dartmouth challenger for the final yard of the race. Across the board, Harvard maintained impressive scores throughout the rest of the finals Thursday evening. On the third day of competition, Harvard maintained their excellence in the next round of finals. Again Kuster came through with a solid performance, swimming confidently to claim the 1000-yard freestyle win. Up next was Zarian in the 400-yard individual medley, taking second place in the competitive field. While Zarian reflected that he “thought [his] performances were solid,” he was “thrilled to see Cole Kuster and Charles Vaughan step up and score major points this past weekend.” Vaughan placed second in the 200-yard breaststroke later Friday evening.

In one of the most exciting races of the night, Umit Gures ‘22 broke the Harvard record in the 100-yard butterfly with his time of 45.13. Not only did the time best the program record, but additionally is the fastest time recorded in Blodgett Pool. Worth noting is the accomplishment of Corban Rawles ‘21, who took the win in the 200-yard freestyle finals, as well as Gunner Grant ‘23 who claimed second in the 100-yard backstroke.

For the final day of competition, Harvard swam strong in nearly every event. Kuster again proved remarkable as he fought for a silver place finish in the 1650-yard freestyle. Competing in a deep field of talent in the 200-yard backstroke, Grant, Zarian, and Simpson came away with first, fourth, and eighth place finishes. Aided by second, third, and sixth place finishes by Simpson, Chang, and Vaughan respectively in the 200-yard breaststroke, the Crimson men continued to rake in points. Jacob Johnson ‘22 proved powerful in the 200-yard butterfly, taking a second place finish.

Closing out the four days of competition with 1439 points overall, the Harvard team continued their streak as the Ivy League conference champions, beating out Princeton by 208 points. Holmquist spoke to the collective success of the team, remarking they ”knew that [they] were fighting for the team and not necessarily individual success.”  Zarian echoed the sentiment, noting that “everyone on the team stepped up this meet” as they “competed together as a cohesive unit.” On a more personal note, Zarian reflected that it was “easy to stay motivated to work hard” given the “countless hours” working towards this collective goal with his “best friends.”

Those who have qualified for the NCAA National Championships will compete later this month in Indianapolis.