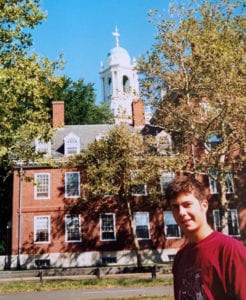 The Big Fish Finds His Pond

Growing up in South Bend, Indiana, Pete Buttigieg was a typical “big fish in a little pond” before arriving at Harvard in the fall of 2000. However, entering such a new environment, surrounded by so many others just like him, Buttigieg was still able to find his niche – politics. And yes, so many Harvard students study government or history and join the IOP, eventually selling their souls to consulting firms post-graduation. Buttigieg, however, had a different idea regarding where this path would lead him. “I have heard that no sensible young person today would want to give his or her life to public service. I can personally assure you this is untrue,” he wrote in the winning 2000 Profiles in Courage essay. Pete Buttigieg, as an eighteen-year-old, had already decided his destiny: one day, he was going to run for president.

At Harvard, he spent his four years understanding the American government and how citizens interact with it, ultimately becoming the president of the Student Advisory Committee of the IOP and working on the study of youth attitudes on politics. From his Profiles in Courage essay, it was clear that Buttigieg wanted to push for greater youth participation in the political sphere. Especially in the aftermath of the 9/11 terrorist attacks and the beginnings of the Iraqi Wars, Buttigieg’s centrist ideology was formed as a Harvard student. His political ideologies came from the fear that the American youth would soon completely disengage from the political sphere. He realized that our political actors’ decisions have consequences and sway the public’s view on the government. So, Buttigieg took on ideologies that pushed for bi-partisanship, reaching across the aisle, on Capitol Hill.

After graduating with a concentration in History & Literature, Buttigieg pursued a Bachelor of Arts degree at Pembroke College, Oxford University on a Rhodes Scholarship. There, he studied philosophy, politics, and economics and founded the Democratic Renaissance Project, a space for Oxford students to come together and discuss the ways in which the Democratic Party should be rebuilt. In all his groups, whether they were at Harvard or Oxford, Buttigieg wanted to discuss politics among students, young twentysomethings who were on the brink of exiting the political sphere. He hoped to create a sense of urgency in his peers, pushing them to engage in greater political participation, to take hold of our democracy.

Thirteen years later, Mayor Pete found himself trying to take our democracy in his own hands. The youngest democratic candidate among the others, Buttigieg was easily still the most moderate one, which may have been his downfall. Even though Buttigieg dropped out of the Democratic race following his performance in the South Carolina Primary, this is not the end for him, for – like he promised before – he has dedicated his life to public service. It shouldn’t surprise anyone to see Pete Buttigieg, however many years it takes, run again for the presidential office. It might be the only pond that fits him.

Arsh Dhillon ‘23 (asekhon@college.harvard.edu) looks forward to seeing what Pete Buttigieg will do next.