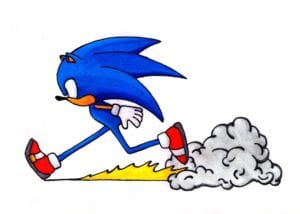 Race To The Starting Line

A Spoiler Conversation about Sonic the Hedgehog

By MICHAEL KIELSTRA and JONATHAN ZHANG

JZ: And I know almost everything about Sonic the Hedgehog. I have to say, even looking past nostalgia, it was a decent movie. It had its good moments.

MK: It had a lot of heart. People throw around the word “heart” a lot with kids’ movies, but I thought this movie had it.

JZ: Absolutely. It did not feel like a cash grab, for most of it, not at all.

MK: I thought all the character arcs could have used five more minutes.

JZ: There were character arcs?

MK: The first half of them were really good. We have Sonic running because he’s scared, and then because it’s fun, and then to protect friends in bar fights, and then to protect people against the evil Dr. Robotnik. Between those last two, we just needed one more transitional scene so that the landing would properly stick.

JZ: The arc that felt really abrupt for me was – I can’t even remember his name – Donut Lord. The main human protagonist. He went from pretty much despising Sonic to being his best friend, in one scene.

MK: His five minutes could have just been Sonic convincing him to have fun at the bar. That would have been great.

JZ: That was condensed into one line, one piece of dialogue. It was like “Let’s not do this. All right, let’s do this.”

MK: If they’d had a proper conversation about this, then that would have been a great scene. The writers seemed pretty willing to just change things as the plot demanded whenever they wanted to.

JZ: Sonic’s speed is also inconsistent. There’s no way around it. One second he’s moving fast in his slow time zone, like he is somehow moving fast within everyone else moving slow–

MK: I quite liked that. I got the idea that was Sonic pushing himself.

JZ: Sonic does have style. He absolutely does. The movie really plays up the immaturity or the naiveté of Sonic more than the video games have in the past. That’s a good thing and a bad thing: it allows him to have a character arc, certainly. He still has that teenager attitude that he’s well-known for.

MK: When they were in the fight, and Sonic slows down time, and that song plays “My feet go boom boom boom,” I laughed. That felt like the kind of song Sonic would play, had he been editing this movie.

MK: I think that says good things about the characterization, that after only half a movie we agree on that integral part of his character.

JZ: I think that scene was one of a few that absolutely showcased Sonic as a character at his best, as a kid having fun.

MK: What would you say the other ones were?

JZ: Sonic living in his little cave was one. He was reading “Flash” comics, he was running in a washing machine like a hamster in a hamster wheel. His narration, even if it did feel “Deadpool”-esque, was genuinely funny. Those are things that are connected to the video-game Sonic, but the movie Sonic also has a few moments where he gets to show off his personality. I always think about the baseball scene.

JZ: One of the really little, subtle set-pieces that I want to talk about, because I keep forgetting about it but looking back I think it is one of the most brilliant and unique uses of Sonic’s speed, is the therapist, where he’s playing different parts for himself and he’s able to do that because he can jump back and forth between the personalities so fast. That’s subtle but it’s unique and it’s so in line with what Sonic would do.

MK: I thought it was very powerful the way the movie used that to emphasize that he had been playing all the parts in his life this whole time, and in the therapist and the baseball game, the speed becomes, in more ways than one, an excuse to never settle down. Why should he? He can go fast.

JZ: He can literally talk to himself as if he were in two places.

MK: It’s a movie about someone biologically optimized to be alone, realizing how crappy that is.

JZ: Those scenes might have been the saddest in the movie because they weren’t part of a grand overarching story. When Sonic is down in the final battle, you know he’s going to get up through the real superpower of friendship and he’s going to win the day.

MK: Let’s be honest, there’s only one way the movie could have ever ended. But you don’t get that same sense of things turning out right, not when he’s playing baseball by himself.

JZ: And if we’re going to empathize with him, we have to talk about his new design and how that helps. There are a lot of times where the movie relies on him looking like something the audience wants to enjoy. I don’t see that happening with the old design.

MK: Most of the film was so well-animated. I thought that Sonic’s speed was beautiful. With the blue streak and then when Robotnik had the red streak. There’s no reason why he would have that particular color, but it was beautiful. And while we’re on this subject, let’s talk Robotnik.

JZ: Obviously Jim Carrey’s take on Robotnik is different than the games’, not only in terms of looks.  They feel like very different ends of the mad scientist spectrum. I’d say Dr. Eggman in the games is closer to someone like Dr. Doofenshmirtz from Phineas and Ferb, but Carrey makes that character his own.

MK: You couldn’t really do Doofenshmirtz in a movie because you need a genuine enemy for Sonic. You need someone a bit more unhinged. I think you mentioned to me that you liked the scene where he was doing the lab analysis and dancing in the back of his truck.

JZ: That was one of the best, if not the best, scenes in the movie. It was just two minutes of unabashed crazy.

MK: He does “unabashed crazy” very well. Tell me about that robo-tank that he sends after them.

JZ: In the games, the robots are called Badniks and their whole schtick is that they’re a bit more stylistic.  The robots in the movie were definitely more sterile – they had that white futuristic gloss on them – but, that said, that scene where the tank was chasing after them and it became a motorcycle and it became a unicycle and then it became a tiny helicopter and then it became a grenade: that perfectly captures what an Eggman robot is. It probably has very little practical purpose but makes you go, “I wish I had thought of that.”

MK: Robotnik question: Agent Stone, the guy who pals around with Robotnik for no good reason. Does he come up anywhere in the games at all?

JZ: Nope. Neither does Longclaw, Sonic’s owl mother. This movie had three existing characters and they were Sonic, Tails, and Robotnik. And only two of them got any airtime, really. It felt less like a Sonic movie and more like a movie with Sonic in it, and that was good and bad for a long-time Sonic fan like me.

MK: What would you say would have been a Sonic movie, if this is a movie with Sonic?

JZ: That’s the issue with Sonic. His stories are very simple. It’s good guy versus bad guy. It’s hard to turn that into a movie. It’s harder to turn that into a good movie. I see why they did what they did. This movie was great. It was a lot of fun as a Sonic fan. But one of the reasons why it might have been fun to me and less so to you was, because I know so much about Sonic, this movie did a lot that differed from my expectations. Things like, Eggman’s whole schtick is different to his schtick in the games, Sonic’s personality is different. Sonic games don’t take place in the real world, for the most part, so that’s another thing. The ending, having Eggman adopting the moustache and the bald look, Tails coming in… For all its good parts, the best part of the movie was how excited it got me for the sequel.

MK: By the way, is Tails like that in the games? A bit more nerdy and on the straight-and-narrow than Sonic?

JZ: Nerdy, yes. Tails in the movie, from the single line we got from him, seemed a bit more confident. A lot of Tails’s story in the games actually is that he’s the one who’s alone, he’s the one who’s isolated, but they gave that to Sonic.

MK: There was some kid in the theatre with us who, when we saw Tails, just yelled “Tails!” from the back. This seven-year-old girl. Most wholesome thing I had heard that evening. I remember on the bus there was this ad for a church, and someone had scribbled “Lies” all over it. My personal beliefs notwithstanding, this is why we can’t have nice things. Parasite had just won Best Picture. I haven’t seen Parasite, I hear very good things, but it’s also a very dark, dark comedy, if it’s a comedy at all. Martin Scorsese has just produced The Irishman, which is three hours of men behaving badly and being sad, and I wanted to see a movie about a happy hedgehog that runs fast and blows up bad guy robots. And I was not disappointed. It had enough of a plotline that I was happy to sit there, it had enough characterization that we can have a twenty-minute talk about it, and it just made me feel happy.

JZ: You bring up Scorsese. He recently said something like “The Marvel movies aren’t cinema.” He compared them more to amusement parks, and I think that’s a self-defeating argument. If they make people happy, who cares?

MK: That’s all Scorsese is trying to do: make people think, make people feel. I think Sonic hit a lot of the standard drama/comedy beats. I felt sad, I felt happy, I didn’t have my philosophy challenged much, but I had it challenged a little. If this is an amusement park, I want a season ticket.

Michael Kielstra ’22 (pmkielstra@college.harvard.edu) might not have to go fast, but likes to anyway.