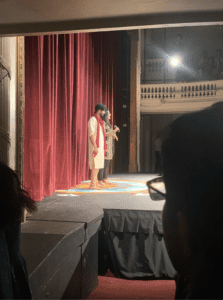 My Experience With the Ghun-gods

A behind-the-scenes perspective from an Independent staff writer

Ghungroo has been a wonderful experience for me for the past two years at Harvard. Practices twice a week are a lot but just as much fun, especially when first learning how to perform these styles of dance – as was the case with me. However, within a handful of practices, we learned about the physical components of dance as well as the cultural side of the show. Physically and culturally, the adventure requires opening yourself up to the new experiences.

The show itself claims around 350 performers, yet the community is much closer than that number reflects. In four performances, the producers and dancers gather in Agassiz Theatre over the course of nearly four hours. Each dancer chatters excitedly until the directors tell everyone to be quiet.

The show has so many dances that it would be tedious to list them all, but they include different styles and music scores from old Bollywood films, a mix of American rap and traditional song, “hype” songs in South Asia, all in different styles. It is no wonder that each year, all four shows are sold out and a special seat is reserved for Dean Khurana.

As the roommate of a producer, I watched him and every member of Ghungroo board pour in over 100 hours of their time in the preceding months to make the shows run smoothly. From booking spaces to coordinating each dance rehearsal, to managing the tech and production staff, the SAA board required dedication to the cause. Additionally, the Tech team programmed everything from behind the scenes. Lighting, curtains, music, stage design all had to be aligned to the second. The entire show running smoothly is an incredible feat. This year, over 1,000 tickets were bought and sold to see the colorful costumes, intricate sets, and sheer energy that Ghungroo brought to Harvard.

Senior dance is another fun tradition that is only available to seniors. The excitement of the dance comes from several minutes of fast-paced choreography, dynamic transitions, and palpable energy – it is the finale for a reason. I am certainly excited for this opportunity my senior year.

The show itself celebrates South Asia’s culture and is produced in conjunction with the Harvard South Asian Association (SAA), one of Harvard’s largest cultural organizations. The annual concert takes place in late February or early March and for many, it extends far beyond dancing. Skits engage with both the global political environment and Harvard itself. They contain many inside jokes for the South Asian community, but they never fail to make me smile. On top of skits and dancing, traditional music also resonates through the theatre and within the hearts of the audience members. Student players either adapt modern songs or revitalize traditional ones. The beauty emanating from the sitar and vocals alongside the hypnotic beat of the drum are always delightful to hear.

Through Ghungroo, Harvard SAA disseminates South Asian culture to the student body. Dancers who take part learn certain cultural aspects. In fact, many of the moves are popular in weddings and festivals depending on the region. Furthermore, representation goes beyond learning, but it also helps create general awareness and appreciation for the diverse arts on this campus. Ghungroo unites a community built around students who are excited to be involved in South Asian culture.

About half of the students who sign up for Ghungroo are of non-South Asian descent. An even larger proportion have never danced before. Through developing the skills and performing on stage, many students remain friends well into the future. In the audience, it is easy to spot the alumni section where nearly one hundred former dancers/producers show up to yell and cheer. I look forward to joining them one day.