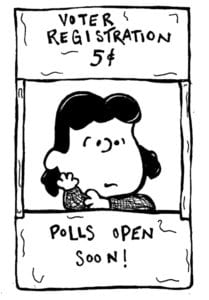 The Harvard Votes Challenge team looks to the primaries and beyond

When I come into his office, Dr. Mark Gearan’s hands are straightening out a paper on his desk, and there is a moment when I am terrified that this interview will consist only of the former White House Communications Director reading from a prepared statement. This passes instantly as we begin to talk, and I realize that touching things is just something Dr. Gearan does: in the ten or fifteen minutes we spend together, his phone, his paper, and his notebook are each in turn turned around, set right, and squared away.

Gearan leads the faculty side of HVC, and, with primaries coming up, there is, in his words, “a lot going on.” Specifically, HVC is focusing on providing information and resources to students who want to vote but aren’t sure or don’t have time to do it on their own. From the time a first-year student checks in for the fall semester and is introduced to TurboVote, through the rest of their Harvard career, HVC will provide advice, timely reminders, and forms for filing out-of-state ballots. During the 2019-2020 academic year, Gearan says, more than a thousand students were engaged in some sort of conversation, and many were registered to vote who otherwise wouldn’t be.

But HVC is more than just canvassing outside the Science Center. Gearan is also Interim Faculty Dean for Winthrop House, where one dining hall table sports a box containing dozens of folders. Each holds absentee ballot forms for a different state. “Frequently,” he says, speaking of Harvard houses in general, “conversations in the dining halls tend to [cover] public topics and politics.” He mentions, in passing, a new HVC website. There are any number of ways for students to be encouraged to vote, and the HVC team is always looking out for more.

This search has taken them beyond the boundaries of Harvard’s campus. Gearan mentions Northwestern and Stony Brook as colleges from which HVC has learned a lot and with whom the Institute of Politics is actively working to understand how best to engage students in general and first-years and graduate students in particular. Under Teddy Landis ’20, HVC organized a conference in 2019 in which undergraduates arrived a week before Opening Days to train in civic advocacy, led by, among others, one of Gearan’s colleagues from Stony Brook. “We can all learn from each other,” Gearan says. He is optimistic that HVC will soon have as much to teach as it is currently being taught.

However, to end on that note would be to only tell one half of the story. HVC, like many IOP initiatives, is led as much by students as it is by faculty. Gearan credits them with bringing in fresh ideas, and credits the success of HVC in part to “Experiences and histories that our staff colleagues bring… [that are] animated, in many ways, by the student side.” Michelle Zhang ’21, HVC Co-Chair is one half of that leadership. (The other half is Amanda Powers ’21, whom we did not interview for this piece.) Like Gearan’s, her hands are busy, playing with her rings while we talk. She joined in fall 2019 as the HVC Director of Communications, entering a team which focused on “laying the groundwork,” as she describes it, before an election-filled spring.

HVC was founded in 2018 due to what Zhang calls “frustration with the low level of voter participation among Harvard students in the 2014 midterms.” In the 2018 midterms, thanks to HVC’s efforts, student turnout doubled. However, a few years of success have not made either her or Gearan complacent. This year, as Zhang notes “ever-looming deadlines,” they are pursuing an aggressive program of expansion. Gearan pointed out to me that there were twelve degree-granting programs at Harvard, but that so far HVC had focused mostly on the College, and that they aimed to change that this year. “The Harvard Votes Challenge is a University-wide movement,” Zhang says. Through the IOP and the Ash Center, HVC has recruited coordinators to help duplicate HVC’s efforts at all other Harvard schools. There are “nuances,” she says, particularly centering around the higher percentage of international students outside of the undergraduate population, but she believes the basic idea is sound.

Zhang and her team are working on a number of smaller projects as well. Chief among these is the effort to appoint an HVC organizer for each house and almost every first-year dorm. This last initiative, unique to Harvard, will take the door-to-door campaigning that HVC rolled out for last semester’s Cambridge elections and expand it, providing a single, local point of contact to help solve any problems prospective voters might have. Zhang also mentioned in passing that HVC was working with certain other student organizations, and that they had supported the Undergraduate Council in providing the free stamps that now grace Building Managers’ offices across the campus.

At the same time, HVC is looking to the future. They also view faculty leadership as crucial, but for different reasons to Gearan: to Zhang, faculty are valuable, at least in part, because they do not disappear after four years. “When all the great people that we have working on it graduate,” she says, “we don’t have to reinvent the wheel.” This might seem a strange phrase to use, since Zhang and Gearan appear to be practically building the wheel as it rolls along, but both of them are very clear that the core of HVC is not about to change. “Harvard has a proud history of engaged citizens,” says Gearan, and defines their mission as one “to inspire students to politics and public service.” When I ask about whether there are any challenges associated with doing civic engagement work at Harvard, this university famous throughout the world as a paragon of higher education, in particular, he mentions only the immense responsibility that the future citizen-leaders of the United States have. Zhang is even clearer: “What’s important is not who you vote for, but that you are an active participant in our democracy.” Harvard Votes Challenge, in the end, is not about making it easy to vote. It’s about making it easy to vote for somebody, not just anybody, but the candidate who, in your mind, most deserves it.

Michael Kielstra ’22 (pmkielstra@college.harvard.edu) is, as a journalist, the very lowest form of political life.