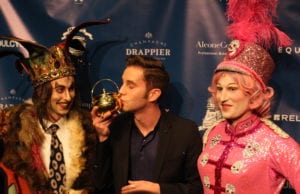 Waving Through a Farkas Hall Window

Ben Platt, star of Dear Evan Hansen and The Politician, is celebrated during the Hasty Pudding Theatricals’ 54th Man of the Year ceremony

On February 7, 2020 at Farkas Hall, the Hasty Pudding Theatricals (HPT) presented its 2020 Man of the Year Award to Ben Platt. He joins the ranks of other proud owners of Pudding Pots, most recently Milo Ventimiglia in 2019 and Paul Rudd in 2018. Co-producer Natalie Needle ‘21 reflected upon the importance of selecting Ben Platt to receive this accolade, noting “the incredible impact he has had on Broadway and in Hollywood at such a young age.” Platt originated the title role in the musical Dear Evan Hansen, which premiered on Broadway in December 2016 and ultimately earned him the Tony Award for Best Actor in a Musical.

True to Needle’s compliments, Platt—the youngest recipient of the award to dateis one trophy short of becoming an EGOT; that is, his Emmy, Grammy, and Tony trophies will have to be rearranged to make room for the Oscar he anticipates earning one day. This prospect did not escape him while on the stage at Farkas Hall. During the celebratory roast Platt had to endure prior to officially receiving the Pudding Pot, four members of the Pudding introduced themselves eagerly to Platt—“Hello, I’m Tony! Grammy! Emmy!”—until a cryptic man, clad in black tie, uttered: “I’m Oscar.” Platt insisted they would meet again in a few years. If Platt is correct, this would make him the youngest person to achieve EGOT status, a title currently reserved for Robert Lopez who completed the quartet at 39 years old. Platt, on the other hand, celebrated his 26th birthday in September 2019, shortly after the release of his critically acclaimed single “RAIN.”

Following the awarding of the Pudding Pot, HPT presented its 172nd production, Mean Ghouls, which co-producer Samantha Meade ‘21 said HPT “was very excited for [Platt] to watch” given his “remarkable career as an actor and musician.” Mean Goals marks HPT’s second production featuring a cast inclusive of genders beyond the limitations of traditionally casting only men. HPT announced in January 2018 that they would begin allowing women to audition for the show, a historic move for the organization.

Ben Platt’s last appearance in Harvard Square was October 3, 2019. Alongside costar Julia Schlaepfer, the duo served Dana’s Bakery mookies—macaron cookies—to passersby in order to promote the recently released Netflix original series, The Politician. The comedy-drama documents the campaign-run of frenetic, power-hungry high schooler Payton who craves to earn a spot at Harvard University—only the first destination on his long campaign trail to hopefully becoming President of the United States. Perhaps the show’s second season, which is already in the process of filming, will help Platt finally secure a Golden Globe win; he was nominated for the Golden Globe for Best Lead in a Comedy Series following his debut in Season 1.

Platt’s excellence expands past serialized web television; in this past year alone, he has achieved many benchmarks in both film and music. In March 2019, he released his twelve-track debut album Sing To Me Instead under the label Atlantic Records. In August 2019, an announcement confirmed that Platt would be reincarnating his Broadway talent in a film adaptation of Broadway production Merrily We Roll Along, which ran for only two weeks in 1981.

Following the ceremony, Platt remarked that he hopes to return back to Broadway as soon as possible, “contingent upon The Politician’s schedule.” No matter what his next immediate creative undertaking will be, it is clear that he has effusive support on 12 Holyoke St.

Marissa Garcia ‘21 (marissagarcia@college.harvard.edu) confesses that she walked past Ben Platt in the basement hallway of Farkas Hall and had to do everything in her power to maintain her journalistic cool.