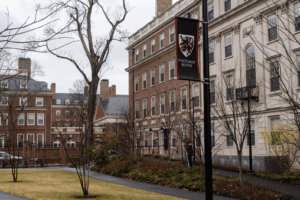 Winthrop students express their love for their interim Faculty Deans

More than a little heartbreak was felt in Winthrop House when Dean Khurana officially announced two weeks ago that the College would soon begin the search for permanent Faculty Deans. The announcement encouraged Winthrop residents to participate in the search process by submitting nominations and attending meetings to contribute input about new potential candidates. Members of the community have responded loud and clear in favor of having Mark Gearan and Mary Herlihy-Gearan, interim Deans who have occupied the post over this past year, stay on permanently.

Many Thropians claim that their interim Deans’ short stay has already led to a profound wealth of memories. Nick Fahy ‘22 says that almost everyone in Winthrop has a story about the couple, “times they’ve shown up for us in ways big and small: watched our performances, sat down next to us in the dhall, listened to our ideas and concerns, invited us over for open houses, and brought art into the House and student performers into the dhall.” Iman Lavery ‘22 fondly recalls the couple “walking around the house chatting with people and getting to know them or, as they did just last week, bringing trays of snacks to students studying in the dining hall late at night.” For Iman and many others in Winthrop, Mike and Mary “make us feel loved and they make Winthrop a home.”

Chloe Saracco ‘21 says that their welcoming and supportive demeanor make them feel a little bit like stand-in grandparents.

She remembers enjoying all the little things they do: listening to Mark play the piano at open houses, reading their House emails congratulating students on their personal achievements, or learning everyone’s names within the first few weeks. “I’ve seen my friends get emotional, like tears, at how welcoming they’ve made Winthrop feel,” says Michael Yin ‘22. “I know that for many of my friends and myself, whatever we could do to convince Harvard to make them our Deans, it would be worth it.” Other students share similar attitudes, as demonstrated by their strong turnout at the House forum. One student reports that peers even led the creation of a petition to keep the Deans permanently, which half of the House has reputedly signed.

But what does Harvard look for in a permanent Faculty Dean? In the official job description posted by the College, the main responsibility is to “oversee all aspects of House Life,” and work with the Allston Burr Resident Dean, who is in charge of the “academic and personal well-being” of the House’s students. More importantly, though, they are held responsible for “setting [the House’s] tone,” facilitating an engaged and respectful community by being a visible presence in the House. Additionally, they manage most of the House’s hiring and event planning. Though the job contains both personal and technical aspects, the posting highlights the need for the new Deans to foster an esprit de corps, a French phrase meaning “feelings of pride and loyalty.” The job description also clearly articulates that “members of the House community” (e.g. students, tutors, and staff) will be consulted during the process.

However, one of the Faculty Deans must be tenured at Harvard, which technically disqualifies Mark and Mary from holding the permanent position. In their official statement on the matter, while describing their interim appointment as an honor and a privilege, the current Deans did clarify in their statement whether they wish to stay on as the Faculty Deans. While tenure might be an issue, some factors may potentially compensate for their lack of the official title. Mark ‘78 was a Thropian himself way back in the day. His eldest daughter Madeleine ‘15 was also a Lion in her time at the college. In regards to his academic qualifications, Iman says, “As Director of the IOP, Mark brings just as much if not more relevant intellectual vitality to the house as any faculty member.” Additionally, at a school where extracurriculars are so valorized as pre-professional opportunities, the role of directors at such organizations as the IOP may now be on level ground with tenured faculty, especially for students who do not envision a career path going into academia.

As for engagement and visibility, the couple is known to visit House Committee meetings to see how they can best support House life and tell stories about the histories of the different rooms in the House. They have also installed book nooks in the JCR, featured black authors during Black History Month, brought in Harvard Advanced Leadership Initiative fellows for dinners and discussions with students interested in their fields, and have been consistent cheerleaders at IM sporting events.

Given these qualities, many Winthrop residents do not view the requirement of tenure status to be the utmost priority.

As the search for new Faculty Deans also begins for other houses, the disconnect between the opinions of Winthrop residents and the selection metrics established by university administrators may point to a need for further consideration as to how new Deans should be chosen. Some have suggested that a selection process may gain more traction with concerned students if it included the very popular couple. Resident Deans have a huge impact on House life and culture, and it is potentially cause for concern that a technicality in housing regulations may end up holding more sway over this crucial decision than a strong, proven track record in the position. The opinions of Winthrop residents open up a conversation: perhaps Harvard should focus less on arbitrary requirements, and more on finding Deans for other houses in a similar situation that can replicate the excellent results Mark and Mary have had in their brief tenure.

Jen Eason ’21 (jeason@college.harvard. edu) was not allowed to diss Winthrop in this piece, against her will.