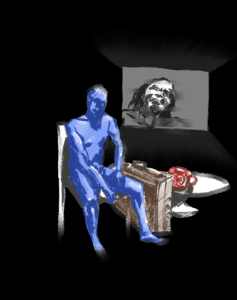 The Whole Kit and Kaboodle

On February 7 and 8, Julius Wade ’20 held his one-man performance of Mac Wellman’s play Terminal Hip: American Dream in HD in the Naumburg Room of the Harvard Art Museums. The performance was the final product of Wade’s joint Theater, Dance, & Media and History & Literature senior thesis. Through a combination of digital audio-visual landscaping, pre-recorded video, and live monologue, the performance “explores the history of the USA//conceptions of the American Dream through the medium of Mac Wellman’s American language play and in the context of the historic American art collections at the Harvard Art Museums.”

Wade previously performed in the Fogg in the 5th floor lightbox gallery in 2018 and wanted to return to it for this year’s thesis production. After that fell through, however, Wade’s art museum contact provided him with a “miraculously perfect option” in the Naumburg room. The Naumburg room, tucked away behind a gallery of 17th century art, allowed for the interaction with history and art history that Wade wanted. Wade confirmed that the route that the audience walked was purposeful— with a large portrait of George Washington, an old grandfather clock, American landscapes, and artifacts from indigenous and enslaved Americans as only some of the items of which viewers got a glimpse on the path to the Naumburg room.

Part of what was so unique about Wade’s performance, however, was the multidimensionality of the presentation of the material. It was neither solely a presentation of audio-visual material, nor was it wholly a live performance. The first half of the one- man show included silent disco headphones and multiple screens and projectors. The back- and-forth nature of video of the BLUE MAN and the black man created a tug-of-war theme throughout the first half, which then embodied itself in Wade’s live monologue.

The play, originally performed in 1991, is a language play that “channels the ‘spectral history of the USA’ through the medium of bad language [and] classical American colloquialism.” Since Wade used the exact script from Mac Wellman’s script, the majority of the time that he spent putting together the performance involved decisions on the staging. Wade informed the Independent of the time it took to decide on the staging that “would best channel the spirit of the text.” Speaking to the multi-platform nature of the show, Wade stated, “Once I got around to staging, it was tough to create the various atmospheres that I wanted to float throughout the show. Projection, in particular, was extremely difficult. I had to keep myself motivated and actively building the poetic meaning through the flow of images and the tuning of the soundscape to be perfectly balanced and carry the text.” He admitted that “the live component of the show (2nd part) was so much easier!”

As the play was a joint thesis production— History & Literature and Theater, Dance, & Media—there were many components and people involved in the lead-up to the actual performance. Though a one-man show, the collaborative nature of Wade’s creative thesis was evident in the thanks that he gives to all of those who helped him throughout the process and the vocally supportive crowd that gathered to watch him.

Wade celebrates the History & Literature and Theater, Dance & Media departments for being so supportive of his creative thesis. He describes how he realized that he wanted to do a creative project, rather than the traditional sixty- to eighty-page paper that the Hist. & Lit. department sees most often. Wade believed that he would have a better experience sinking time into a creative project which would be deeply interesting to him, in addition to using the same time that he would otherwise dedicate to a traditional paper. And so, he officially changed his mind coming into senior fall and pitched a prospectus to the TDM department, which was accepted.

Wade has always been interested in twentieth and twenty-first century American visual culture, as well as what might be possible in the future. In looking for a text that would incorporate both of these ideas, Wade stated that he had performed “a Mac Wellman production [his] sophomore year and remembered how masterful his language is.” Wade also attended a Mac Wellman symposium in New York City last semester and was “blown away by a special performance of Terminal Hip” that convinced him to put on his own production.

In discussing what he hoped the audience might take from the performance, Wade admitted that while “it’s tough to say… what the specific message might be, if anything,” he “most wanted to create a production that embodied [his] view of the American experience. [He] thought a lot about [his] identity and … strange relationship [with himself, his] country, and [his] history,” while, of course, maintaining the Wellmanian terror in its original intent.

Jilly Cronin (croninj@college.harvard.edu) is inspired by Wade to begin working on her own Hist. & Lit. thesis.