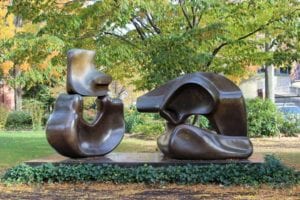 The Sculpture Across From Lamont

The bronze Large Four Piece Reclining Figure by Henry Moore has sat in the courtyard near Lamont and Houghton Libraries as a staple piece for nearly 50 years. Harvard received the work of art in the early 1970s, and it has remained on-campus since then. The sculpture is part of a larger series known under the same name with other locations in San Francisco, California, Kofu, Japan, and Perry Green, Hertfordshire, England as run by the Henry Moore Foundation.

This sculpture strives to impart a surreal impact on the viewer. Henry Moore’s multiple features in Tate’s galleries attest to his brilliance. A native of England, he was bombarded with many public commissions after reaching a high level of fame in 1948. Typically inspired by animal bones, pebbles, and general natural phenomena found in landscape, Moore began to diverge from the representative form as seen in his pre-war sculptures.

The new pieces were often enlarged bronze casts that seemed somewhat more ubiquitous than his pre-war sculptures. In the earlier period, Moore adhered more to the British modernistic credo of carving the final product, which changed in the latter period when he would create a Marquette (or a model) that would create a cast and finally create subsequent casts. Moore slowly became the go-to sculptor around the world, especially in the 1960s.

One of Moore’s favorite themes of his post-war art is the subject in this very piece: the reclining female figure. Experiencing the art is almost surreal and somewhat ironic placed in front of Lamont Library, where people do anything but recline. When observed though, the fixture achieves its mission by helping the viewer escape, a necessary job after an undergraduate emerges from Lamont after pulling an all-nighter.

Large Four Piece Reclining Figure by Henry Moore is carved from alabaster, or a soft mineral commonplace in sculpting. The bone or stone-like shapes reflect not only Moore’s interest in organic scenes but also his fixations on the inorganic, inevitably found when looked at in the right angle.

The shape was somewhat revolutionary at the time, as it combined prehistoric art with the abstract observed in Picasso. Each piece appears abstract, but the shapes start to blur the lines between the representation and the interpretation. Moore is aware of this effect, sayingin Gallery Label in September 2004 that the “knees and breasts are mountains.” Once these different “parts become separated, you don’t expect it to be a naturalistic figure,” and therefore, it is justifiable to make it “like a landscape or not.”

Harvard is taking several steps to preserve this work, which has a value estimated to be $500,000. Over time, the sculpture’s surface has accumulated scratches. Ideally, if Harvard could bring back the luster present when it was first brought to campus, it would be considered a big win in the art community.

The capricious weather of New England also harms the work. Acid rain darkens its surface, leaving behind oxidized patches. Though little can be done about the rain, counteractive methods prevent the bronze statue from becoming as green as the Statue of Liberty. Interestingly, the Harvard Bixi, the Chinese marble stele outside of Widener, is wrapped in green tarp for this same reason; the acid rain would make the easily dissolvable marble all too similar to swiss cheese. If temperatures do not warm,  snow can remain on the statue for long periods of time, so its cost to the statue can be greater.

No matter, the Large Four Piece Reclining Figure is well taken care of considering its large price tag and historic value. Wrapping the sculptures is only a small percentage of what Harvard does. Conservators have replaced the coating of the original sculpture from a lacquer-like substance, susceptible to corroding, to wax, a more impermeable substance. When scratched, wax forms a softer pattern of oxidation. So, when rivulets line the statue, the wax is ultimately less noticeable. The common substance is also easy to apply on, so the statue can be easily preserved.

The donor of this piece was David Bakalar, a member of the Harvard Class of ‘46. Moore sold his pieces on the condition that they would live on to be publicly displayed, which was his intention while crafting his work. So, it was only fitting to display the sculpture at Harvard, which welcomes approximately 650,000 annual visitors.

I hope that the next time you walk by this sculpture, you view the piece in a new light. Find your own interpretation of the Large Four Piece Reclining Figure by one of Britain’s foremost artists. Appreciate the art peppered on our campus. Chances are the art is more important than what the modest display implies.