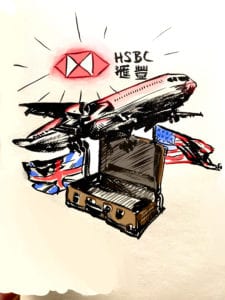 The unexpected warm welcome upon arriving in London

One of my earliest memories of travel is that of a younger version of my father telling me what HSBC stands for. The adverts have been plastered on the airbridges at London Gatwick and London Heathrow airports for years and years, but I knew the letters only as a British bank with which I had no business. (We were, and are, a Barclays family.) As we walked past the corporate logos, my father asked me if I knew what they were, and told me that, when the company was founded, it had been the Hong Kong and Shanghai Banking Corporation.

It says a lot about my family that our airplane small talk had become this esoteric. Already, air travel was a major part of our lives, and “Look at the big plane, children” had aged fast. If you live in Britain and you want to get somewhere warm, you fly, and you fly for three and a half hours at a minimum. All of us had passports, many of us had multiple citizenships, and the weird nook in our basement was filled with suitcases old and new. One of the earliest things my parents bought for my siblings and me was a matching set of orange roll-on cabin bags. By the time I graduated high school, I had been to the USA, to Canada, to Italy, to Germany, to Austria, Belgium, the Netherlands, Luxembourg, Iceland, and Scotland, although that last one is still technically part of the UK. I flew to the south of France on my own for a Boy Scout camp when I was sixteen. In terms of knowledge of flying, I beat out even the most successful observational comedian.

All of this, however, centered around our family home. We would go places for a week, or a month or so in the summer, and we would come back. We would always come back. The rule was that we had to pick up our bedrooms before we left, so that we could come home to clean floors. Everything about our trips was built with the return in mind.

Then I committed to Harvard. There were a million pieces of paperwork, many of them confusing, expensive, or, best of all, both, but hidden quietly in the pile was my first one-way plane ticket. My mother flew out with me, dropped me off, tearfully caught an Uber back to Logan, and flew back alone. I was left with a new residential address (Stoughton 8), the beginning of a college career, and no planned flight to London.

My response was to lose myself in the excitement of this new world. America was newer, faster, and more exciting. People I didn’t know said hello to me! I could buy toothpaste at 3am! I could get rewards points for it just the same as if I hadn’t forced some poor guy to sell me toothpaste at 3am! The next time I traveled, it was to spend Thanksgiving with my grandparents in Illinois.  Flying anywhere with my family—which includes three different nationalities and two younger siblings—is a major logistical undertaking involving multiple checked bags, a mental checklist of stuffed animals, and stacks of passports that look like something Jason Bourne would have in a safe deposit box. That Thanksgiving, I bought a ticket online, packed a bag, checked in with the app, and was through the airport, completely paperless, in under an hour. It felt fantastic. I texted my mother as soon as I got off the plane and asked her if this were what travel had felt like before she had met my father. She said it was.

A month later, I booked another flight. I was coming home for Christmas, and then I was going back to Harvard for the start of the spring term. It was a perfectly routine return transatlantic flight, but it was in the wrong direction. I was not returning to Britain. I was returning from Britain. When I planned travel with my home in mind, I planned it around Cambridge, Massachusetts.

I think that was the Christmas that my sister, in an argument, looking around for insults to throw at me, came up with “You’re so American.”

I had big travel plans for that summer. I was going to take a Greyhound or Amtrak to New York and intern there for six weeks, then a flight to Toronto for two months of research, and then another flight direct from Toronto to Boston. If things had gone according to plan, I would have spent maybe four days, total, with my family over that whole summer. I couldn’t wait. It was going to be terrific.

As it happened, the internship fell through for a whole host of reasons, only some of which were my fault.  There was only one place that would take me for a six-week stretch right at the beginning of the summer on short notice. I booked another transatlantic flight.

At this point it would be all too easy to say that spending those six weeks at home reminded me of the place I had there, ensured I would never again forget where I came from, cemented “home” in my mind as being where my parents were, and so on. Sadly, no. What it did do was to teach me that spending time with my family was not, at this point, a failing. Caught up in the whirlwind of Harvard life, with its endless focus on getting internships, getting jobs, and traveling to faraway corporate headquarters, it had become too easy to see a return home as a default option, a backup, a gap in the CV. When my internship was canceled, I had emailed the Office of Career Services saying that my research only lasted eight weeks and asking if I should be looking for other one- or two-week placements to pad it out. They had told me politely to relax, but, when stuck at Harvard with nowhere to go, that was hard to do. Back in Britain, away from the constant talk of coffee chats and résumé drops, it was much easier. I still hadn’t been able to define where I lived, but at least I now remembered that this wasn’t not it.

And so it was that I came to fly from London to Toronto, spend two very happy months there, and then hop back from Toronto to Boston in time to start sophomore year: three cities, all of which I have some sort of ties to, none of which contain a place, or even a few square miles, which I can unequivocally call home. (If you’re wondering about Toronto, my father’s family comes from there.) Be that as it may, I don’t think I have to decide just yet. I have places with people who care about me, places for which just being there is a completely reasonable use of my time. And if I ever do want to come back to my family, I can pack a bag and go, and the Hong Kong and Shanghai Banking Corporation will stand ready as always to welcome me.

Michael Kielstra ’22 (pmkielstra@college.harvard.edu) is comfortable being uncomfortable in United economy.