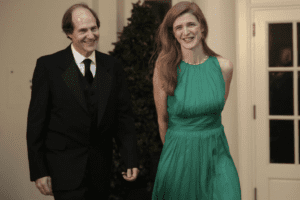 Samantha Power and Cass Sunstein epitomize the power couple. Sunstein, a professor at the Law School, and Power, a professor at both the Kennedy and Law Schools, have been married for about eleven and a half years. From the moment their relationship began on the Obama campaign to the class they currently teach together here at Harvard, the couple has impressively balanced their professional and private relationships, simultaneously leading unbelievably accomplished careers while raising their kids.

As the Robert Walmsley University Professor at Harvard, Sunstein’s work spans multiple disciplines and fields of study. He has written numerous renowned books and articles, and he is the founder of the Program on Behavioral Economics and Public Policy at Harvard Law School. From 2009 to 2012, he was Administrator of the White House Office of Information and Regulatory Affairs under Obama. Power is currently the Anna Lindh Professor of the Practice of Global Leadership and Public Policy at the Kennedy School and the William D. Zabel ’61 Professor of Practice in Human Rights at the Law School. A bestselling author, Power also was Pulitzer Prize winner for her book, A Problem from Hell: America and the Age of Genocide. During Obama’s first term, she served on the National Security Council as Special Assistant to the President and Senior Director for Multilateral Affairs and Human Rights. During Obama’s second term, Power served as the United States Ambassador to the United Nations. One could say that these two are quite the underachievers.

While campaigning in Iowa in 2008, the two became very close after spending a lot of time together, and as Sunstein says, “When Obama won, well, love was in the air.” During Obama’s presidency, Power and Sunstein worked only two minutes away from each other in the White House. Naturally, their professional and personal relationships became very intertwined. While Power was pregnant, she once briefly fainted in her office, and everyone immediately knew that Sunstein was the person to call.

Power and Sustein are no ordinary couple in academia either. One of my favorite moments in Samantha Power’s memoir, The Education of an Idealist, occurred the morning before Power had to appear in front of the Senate Foreign Relations Committee in 2013 to be confirmed as the US Am- bassador to the United Nations. After forty-eight hours of her husband firing potential questions at her that Senators might ask, Sunstein woke Professor Power up by blasting Drake’s song “Started From The Bottom” and Eminem’s song “Lose Yourself” on repeat. As Power recounted, “There we were—two nerdy professors rapping Drake and Eminem lyrics in the Georgetown Inn.” I’m sure those who watched Power’s well-rehearsed Senate confirmation just hours later would never have guessed that she was rapping Drake and Eminem that morning.

Professors Power and Sunstein bring this same energy to their course, Making Change When Change is Hard: the Law, Politics and Policy of Social Change, which is well loved by many Harvard undergraduates. Sunstein said that teaching together hasn’t impacted their relationship much as they have quite a bit of experience working together. In fact, their personal relationship has definitely made teaching together easier. He pointed out that it is quite easy for him to ask his co-teacher a question at midnight or at what would typically be an unreasonable hour, so long as the children or the Labrador retrievers do not interfere.

With Valentine’s Day around the corner, the couple is planning on having a romantic dinner. However, in a perfect example of their personal and professional lives being constantly entwined, Professor Sunstein has a feeling that mid-date they will likely end up discussing how to improve Monday’s slides for class.