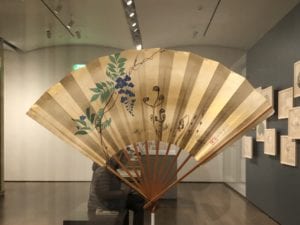 Come one, come all, to Painting Edo, the largest exhibition ever presented by the Harvard Art Museums. This historic exhibition features Robert S. (Harvard Class of ’61) and Betsy G. Feinberg’s extensive private collection of over 120 paintings, hailing from Japan’s Edo period (1615-1868). Painting Edo showcases a comprehensive collection of paintings which have persisted across millennia and continue to shape our contemporary understanding of Japan’s cultural and artistic zenith.

By the early 18th-century, Edo (modern-day Tokyo) was the largest city in the world: home to over one million inhabitants. During the latter half of the 1800s, Edo experienced an unprecedented expansion of pictorial culture. This cultural boom was, in part, due to the governing hand of the Tokugawa Shogunate who secured an epoch of peacetime and allowed for the city’s new chapter of urbanization, economic prosperity and burgeoning of visual arts and literature. The commoner class was, in turn, afforded the economic agency to patronize Edo painters and adorn their lives with art. At this time, the luxury of art collecting, previously known only by the upper echelons of society, was democratized. The number of people who owned paintings (not to mention, the number of paintings each individual owned) skyrocketed. Art became increasingly accessible across social strata, and new audiences emerged to consume the enormous variety and quantity of paintings, promoting artistic production.

While this collection remains cohesive, paintings from the Edo period are strikingly diverse in subject matter and treatment. Painting Edo presents visitors with paintings depicted on an astounding range of media: hanging scrolls, folding screens, sliding doors, painted fans, and woodblock-printed books. Drawing upon East Asian history and literature, the range of paintings portray the natural world as well as people engaged in work, warfare and play. Painters of this period were self-proclaimed “non-conformists,” with a keen interest in merging and mediating different themes, styles, practices, and ways of life. The paintings in this exhibition present a meditation between the classical vs. the contemporary; sophistication vs. crudeness; East vs. West; creating art for the maker vs. the patron; the monochrome vs. the polychrome; the aesthetic of amateurism vs. professionalism. Early Modern Japanese paintings embody artistic originality alongside inflections and imports from Chinese-style literati ink painting, established Japanese stylistic schools and lineages, and even pictorial traditions associated with European landscape paintings. These artists cultivated their identities as artistic iconoclasts who refused to align with just one particular practice, style, or tradition.

Let it be known that Painting Edo is an artistic and cultural cornucopia which should not be reduced to a one-dimensional interpretation. This article is not meant to reduce or generalize the multi-dimensionality of the exhibition, but rather to provide a view into the exhibition which centers around paintings that compelled me as an art history student and a museum visitor.

I walked through this exhibition for the first time with my sister, who favors contemporary art for its eclectic weirdness and well-known ability to explicitly push boundaries. After a cursory walk through the gallery space and a shared acknowledgment of the paintings’ collective aesthetic beauty, I could sense she was growing bored by the exhibition’s lack of surface-level shock-value. While not as outrageously sensational as say, Marina Abramović’s contemporary performance art, this exhibition is still punctuated with compelling instances of non-conformity and “boundary-pushing.”

Let us look no further than Ikeno Taiga’s literati painting, Chinese Musicians. Taiga was an independent practitioner hailing from Kyoto who painted in the mid-18th-century. In this ink painting, Taiga uses his fingertips and nails in the place of a calligraphy brush to suggest the stylistic archetype of amateurism. This piece was allegedly painted in front of an audience and thus can be classified as a vestige of performance art. Taiga sought to convey virtuosic amateurism through his abandonment of the conventional paintbrush. The ink smears and scratches evoke notions associated with the idea of “true view,” which aims to convey subjective experience rather than objective reality. Taiga painted on the floor to further exaggerate the desired effects of improvisatory roughness and a lack of professional polish. Chinese Musicians has an unparalleled corporeal quality which represents Taiga’s stylistic attempt at enlivening and re-corporealizing imagery copied from the Kanō school’s popular, printed painting manual. Each scratch and smudge of pigment marks the exact instances where Taiga’s inked hands came into physical contact with the paper. His decision to apply paint to the paper scroll in this unconventional fashion establishes a sense of artistic immediacy, performance, and authenticity, nearly 300 years later.

Japanese Edo painters pushed the boundaries of East Asian art through their furtherance of amateurism as a rhetorical ideal and their inclusion of suggestive imagery. Various paintings in the Painting Edo exhibition depict ukiyo – the “floating world” – through imagery inspired by Edo’s legalized brothel and theater district. The folding screen, entitled Celebration at the Entrance of the New Yoshiwara, by Katsukawa Shunkō II, presents us with a privileged view of Japan’s bustling pleasure district, a collective urban fantasy. Graced by more than sixty figures, this image is one of dynamic and diverse revelry; a celebration of the sensorial intensity and ephemerality associated with the pleasures of food, drink, music, and sex. Ukiyo imagery departed markedly from the conservative and stylistically simple subject matter associated with its East Asian artistic precedents which promoted the virtuosic (and at times, trite) principles of permanence, moral integrity, modesty, and loyalty. Ukiyo imagery was much more titillating. Before long, it had captivated the collective eye of the emerging merchant class and had stimulated a sustained artistic demand for contemporary subject matter.

My favorite part of Painting Edo is the collection of painted fans. Folded paper and bamboo is certainly an unexpected painting surface. When the fan is closed, the painted image remains hidden; it must be opened – activated – to be seen. The painted fan is personal and transportable. It marks the passage of time and the cyclicality of seasons when it awakens from its winter hibernation to combat the intense heat of summer in Japan. I am compelled by the fan’s multifaceted identity as an art object, accessory, and utilitarian device. The ambiguity of this material object establishes a point of tension that challenges the conception that “art” is a one-dimensional aesthetic object which hangs on the walls of a museum and serves no practical purpose. The fan is multilayered and kinetic; it evades trivialization and initiates a discourse around our preconceived notions of art vs. craft. The fan was crafted to be animated, unfurled, and folded. It summoned the gods during ritual ceremonies and kept the summer heat at bay; it was offered as a gift and served as a stylish adornment. I experience the fan in its museum context, divorced from its vibrant existence as both a beautiful and functional object. Today, we can only imagine the splendor of the Japanese fan, in its animated state.

The expansion of Japanese pictorial culture not only resonated domestically but transcended the East Asian archipelago to influence the trajectory of painting in the West. The Japanese export of Edo paintings to Europe had a tremendous impact on Western art in the late 19th-century. The subject matter, perspective, and composition of Japanese woodblock prints, and ukiyo-e inspired an artistic culture of Japonism in Europe which had a profound impact on the Impressionism and Art Nouveau movements. Japanese art from the latter part of the Edo period resonated far beyond the epoch itself, to inform an international interchange and to inspire art movements across the globe. The multivalence of Painting Edo implores you to visit multiple times before the exhibition’s close on July 26, 2020.