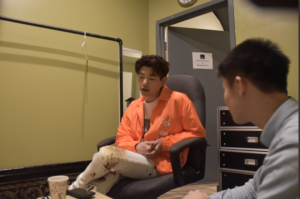 “No Shame” in Being Yourself: A Night with Eric Nam

Singer-songwriter Eric Nam returned to Boston last Friday for a sold-out show at the Royale, promoting his first all-English album “Before We Begin.” Before the show, the Atlanta-born artist talked about differences in the Korean and US music scenes, finding your own style, and life as an Asian-American pop-musician.

Korean pop, and more generally Hallyu (“Korean Wave”), has been on the rise since the late 1990s. The Korean film Parasite just made history as the first international film to win Best Picture at the Academy Awards, and well-known K-pop group BTS topped the iTunes charts across the globe with the release of their new album “Map of the Soul: 7.” While the talent on display seems undeniable, there remains a stigma around culturally diverse influences and representation in the arts.

Korean-American musician Eric Nam is one of the artists working against this stigma and setting an example for this new direction of cultural appreciation. Born and raised in Atlanta, Georgia, Eric Nam graduated from Boston College with a B.A. in International Studies and Asian Studies before making his singing debut on the South Korean casting show, Star Audition: Birth Of A Great Star 2. While he is also well-known and appreciated for his roles as radio star, podcaster, and TV host in South Korea, his career is most noteworthy for the way in which his music overcomes borders, as he creates a style that goes beyond any kind of labels.

“The barriers are coming down and I think it’s exciting,” Nam says during his interview about the recent developments in the music world. As a Korean-American artist, Eric Nam does not simply identify as a “K-Pop Idol”:

“Instead of making me like somebody else, I can do something that’s distinctly Eric Nam that only I can do because I’m Korean-American. That was like years of discussion, and we got to that point. I’d say from the Honestly album to this last album Before We Begin, there’s a color that I’ve established as Eric Nam sound that people in Korea are like ‘Eric’s album is gonna be a very pop-driven American album,’ which I’m excited about.”

Nam’s personal style draws people in. Before the venue opened its doors, many fans had already been waiting in the cold Boston winter for hours to secure the best spots in the pit. Many of these were college students – understandable, given Nam’s alma mater, Boston College. His show would surely attract dedicated locals.

At 7:45 p.m. on the dot, the lights in the venue turned off. The audience roared with excitement, as a single spotlight focused solely on Eric Nam entering the stage. He opened his concert with a crowd favorite, “Come Through,” which built excitement from the first second. While upbeat and familiar, the pop song is uniquely Nam, its catchy chorus immediately animating the crowd to join the vocally evocative performance. The song and accompanying dance sequences were well-received, not just by Nam’s fans but also their friends, significant others, and parents, many of whom were clearly here as a favor to someone. Songs such as super-hit “No Shame” or the newer “Congratulations” were all equally engaging, yet different in style. Nam moved from thrilling melodies to bare voice without missing a beat, and the audience loved it. His four backup dancers completed the exquisite and elaborately-developed stage setting. While his tunes switched from lively pop songs with rap and R&B elements to softer lyrical explorations, he continued holding on to that specific Eric Nam touch.

The event was going to be “half concert and half TED-talk,” he later half-jokingly explained during the first short break between songs. Nam seemed very willing to impress his fans not simply with his excellent musical performance but also with his smart ideas and genuine, well-spoken views. Reminiscing about his days in Boston, he said:

“Boston is one of those cool cities where it feels like a second home. […] There’s something about it that makes me feel like I’m kind of coming home, every time I’m here. I’m excited for the show tonight, and I hope to just keep coming back whenever I can.”

He continued by expressing his surprise about a sold-out show in his college town, considering the difficulties of “making it” in the United States as an Asian American artist:

“But you guys are here. And the reason that’s crazy is because, me, a southern Korean American kid from Georgia had to go to Korea to be able to come and sing for you guys in Boston. And it’s absolutely insane to me that I can do this for a career, but also the fact that I had to go to Korea also blows my mind.”

This was just one of his many appeals for more cultural inclusion and diversity. Nam talked about the issue of inclusivity in a personal way, neither cliché nor repetitive, but relevant, honest, personal, and truthful. After explaining some of the hardships on his journey to international renown, he thanked the audience:

“So, the point is: you being here is not only a cool moment and a great memorable experience for me and hopefully for you, but you guys are taking part in a cultural movement that pushes for diversity. So thank you so much.”

His speech was followed by cheering and loud shouts both in English and Korean. He made everyone feel like a part of something bigger.

Afterwards, he continued to play the songs on his setlist, which were as diverse as his audience. In a mixture of Korean, English, and Konglish songs, he further showed off his charming personality and voice. Most of his songs were personal, almost intimate. With “Love Die Young,” he explored an emotional format of pop music. With his backup dancers off-stage, the spotlight again focused solely on Eric Nam, who used this opportunity to get closer to his fans. While he sat on the edge of the stage in an almost vulnerable way, he deepened the connection to the people in the first couple rows behind the barricade. And the response to this very intimate part of the concert was entirely positive: A sea of flashlights announced the collective understanding of the pain caused by love, slowly running out.

Despite the diversity of characters in the venue, or perhaps because of it, everyone could relate to Eric Nam’s songs. After more songs in his joyful and rhythmic pop style, he turned back to the direct conversation with his audience. He talked about his mom disapproving of his “too-much-sexiness on stage.” He talked about his brother’s wedding. What was already an immersive concert experience became a chat in a living room, in which every single person felt like he was directly talking to them. He finished up by saying:

“As Asian-Americans, we’re at a very critical point where we need more young people to be excited and get involved. If forever people were like “You can’t do it because you’re Asian”– that’s the stupidest thing. You can do whatever you want now. […] For anybody, just pursue what you love and you’ll get there. I just keep repeating myself but that’s it.”

And that was it. No more, no less.