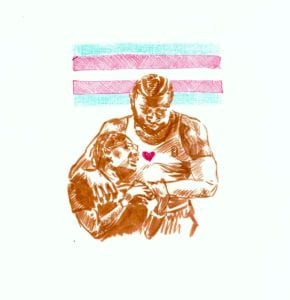 What Zaya can teach us about living our truths

Earlier this month, Gabrielle Union and Dwyane Wade’s child came out as transgender with a heartwarming Instagram TV clip. The clip was widely shared on social media, with Zaya reminding us all, “Just be true to yourself because… what’s the point of being on this Earth if you’re going to try to be someone you’re not? It’s like you’re not even living as yourself which
is the dumbest concept to me.” The Wade family has since talked on several platforms, sharing their story as a family. With transgender suicide rates concerningly high, the public nature of Zaya’s coming out has sparked a considerable amount of discourse on social media. While the majority of this conversation is positive, a stream of transphobic conversation remains online, outraged at the family’s acceptance of Zaya. Her brave coming out has reminded us of how far we have to go as a society in promoting transgender rights and why it’s important to live our truths.

Gabrielle Union captioned the video announcement with the words “Meet Zaya. She’s compassionate, loving, whip smart and we are so proud of her. It’s OK to listen to, love &amp; respect your children exactly as they are. Love and light good people.” In the clip, Zaya is seen candidly sharing a conversation with her father. Zaya remarks “Be true, and don’t really care what the ‘stereotypical way’ of being you is.” Wade, 38, then asks his daughter, “Even when people are being mean, and even when people are getting hurt because they’re trying to be themselves?” Zaya responds, “I know it can get tough, definitely, but I think you push through, and you be the best you.” The video went viral, and rightfully so. The wisdom showcased by Zaya has blown the internet away. At the age of 12, and while making such a brave decision, how is she so wise? How is she showcasing so much empathy and compassion to those who will bully her for living her truth?

Transgender people are among the most marginalized in our society. Suicide rates for transgender and gender-nonconforming people are far higher than national averages. According to the National Center for Transgender Equality’s 2015 U.S. Transgender Survey, 40 percent of adult respondents reported having attempted suicide in their lifetime – almost nine times the attempted suicide rate in the wider U.S. population. Comparing these numbers across different racial groups evokes even more concern. New reports from the Trevor Project found that transgender and non-binary youth are twice as likely to attempt suicide in comparison to their cisgender black LGBTQ+ peers. Researchers have explained this trend as possibly being due to a lack of mental health treatment, racial discrimination, and adverse childhood experiences. Transgender lives are in danger, and even moreso black transgender lives. Zaya’s public coming out is no doubt an important event for many black transgender youth across the globe.

Speaking on the Ellen Show, Dwyane Wade described how his child’s coming out had. transformed him as a parent. “Zaya, our 12-year-old, came home – I don’t know if everyone knows, originally named Zion; Zion, born as a boy – came home and said, ‘Hey, so I want to talk to you guys. I think going forward, and I’m ready to live my truth. And I want to be referenced as she and her. I’d love for you guys to call me Zaya,’” Wade recalled. Wade and Union have openly talked about the effort they have made to become educated on the LGBTQ+ community. “We didn’t change overnight – we weren’t immediately the perfect allies,” Dwyane admitted. “We reached out to black trans activists, advocates, educators, and watched shows and documentaries like Pose, Euphoria and The Death and Life of Marsha P. Johnson. Zaya had to educate us. She has always led. At times, we’ve had to catch up.” Wade and Union have been commended by thousands online, being praised as supportive, brave and loving parents to their new daughter. Many noted how important it was to see a high-profile family in support of a
family member coming out.

However, not all of the online public responses were as supportive as one would hope. When scrolling through the tweets, stories and think pieces, it would be hard to ignore the undercurrent of transphobia which many are feeding into. Worryingly, many of these transphobic comments have come from rappers with huge social followings. Rapper Young Thug tweeted: “All I wanna say to dwade son is GOD DONT MAKE MISTAKES; but hey live your true self.” Another rapper, Boosie, also shared his spiteful view, going on an incoherent expletive-filled rant on his Instagram story: “That is a male. A 12-year-old. At 12, they don’t even know what they next meal gonna be,” said Boosie, misgendering Zaya in the process. These are only a few of the hateful comments shared online – by celebrities, with an impressionable following, no doubt. While sifting through the hateful comments, it is easy to see the high concentration of the black community who support these intolerant views. As someone who’s always been confused about the rifeness of homophobia and transphobia, I asked some Harvard undergraduates about their take on this intolerance within the black community in the wake of Zaya’s coming out. Jada Jones ‘22, a sociology concentrator, noted, “There’s so much internalised and expressed homophobia and transphobia in the black community. I think that having contemporary influential black figures supporting trans youth is super valuable.” Naomi Jennings ‘23 noted of the “bravery” it must have taken for Zaya to reject “hypermasculinity,” especially coming from a family of an athlete. Miah Corie ‘23 said, “I love that Dwyane and Gabrielle’s support was so public. A big step in the right direction against transphobia and homophobia in the black community.” The black Harvard students I talked to were unwaveringly in support of Zaya, showing that hope prevails for a better discourse on LGBTQ+ discourse within our communities. If dialogue is created and natural concepts are normalized within our communities, mental health resources can be better allocated, and trans well-being more respected.

In light of it all, Zaya’s coming out teaches us all about how important it is to live our truths. In spite of the hate, Zaya seems to triumph in knowing she is being her most authentic self. I think we could all learn something from Zaya’s bravery. It’s difficult to prioritize your feelings sometimes. It’s hard to put your wants first, before the expectations of your family and society. It takes even more courage to choose to live a truth which so many people are offended by. But as Zaya herself said, “What’s the point of being on this Earth if you’re going to try to be someone you’re not?”