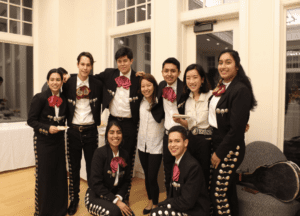 It is my personal initiative this semester to explore the diverse area of arts at Harvard, and, whether I am critiquing a show, or highlighting the underbelly of Harvard’s life, those communities all define many people’s Harvard experience. It is an honor to experience them, and I highly recommend venturing into those communities to experience Harvard in a new light.

I have begun getting to know the mariachi community at Harvard through the Mariachi Veritas de Harvard. This vibrant and diverse musical group is comprised of thirteen members, and they are already starting this semester with their first performance this Thursday, February 6th at 8:30 pm in Lowell Lecture Hall. The band was a new discovery to me when I saw Natalia Fuentes’ email in the Lowell email list asking if anyone was able to play the trumpet and would like to join. After Lowell House Faculty Dean David Laibson responded to her email, this bite-sized community got on my radar. I got into contact with Fuentes, and we had a conversation about the history behind the music, the culture and, of course, the band. Each is tied into the other, so hearing her talk about bonding with other members and bringing in her own background was incredibly interesting.

Mariachi, for those who don’t know, is derived from Mexico and is a genre of music dating back to the 1700s. Typically, bands have guitarróns, guitars, trumpets, violins, and vocalists among other instruments not typically found in American music culture. The upbeat tempo and dramatic intonation of each note are far from what’s heard in most western style—that is, mariachi sounds somewhat similar to the romantic era but remains totally unique in its tonality. Their iconic vestiges called trajes are almost as essential to the band as any instrument. From a cultural standpoint, reproducing the sound and look is part of what makes mariachi “a defining pillar of Mexican identity,” in the words of Fuentes. From tone to style, to the complete embodiment of what they represent, Harvard Mariachi Veritas de Harvard achieves this identity with an equally unique band. One thing is for sure though: when they perform for parties or concerts, they focus on maintaining one of the most essential aspects of mariachi: the culture of Mexico.

As anyone who has experienced mariachi may know, the whole experience “marries art, culture, and humanity.” According to Fuentes, who is a classically trained violinist but comes from a Mexican heritage, there is nothing else like mariachi; while classical music can be moving and emotional, it doesn’t just “make you want to dance.” On one hand, this feeling is the result of its culture; scenes in which mariachi is performed are in the celebration of a cultural or social event, like parties or festivals. Dancing manifests as a result of surrounding standards where physically dancing is encouraged. Mariachi has retained its tonal influence from western culture, even through globalization. When western instruments were introduced, folk became the prevailing type of music, away from the influences in Europe at the time. Even today, as pop music becomes ever more accessible and dominant, mariachi still manages to create unique tones through refreshing renditions of otherwise over-repetitive popular music.

The style that Mariachi Veritas performs in is rancheras, channeling musicians such as Luis Miguel. The band’s diverse background and blend of experience forces its song selection to be equally as unique. Of the approximately thirteen members, only about half have Mexican heritage in their blood, and about as the same number have never played an instrument. However, with experienced players such as Fuentes or Anaí Morales (who has released an album of her own), they have a fusion style that ties in Mexican pop culture and each of their own experiences.

Coming from a classical background, Fuentes and many others found memorizing their setlist strange, but an unforeseen way to bond with band members. “[Bonding] through cues,” teaching freshman to play instruments or different styles, and figuring out how to get all the equipment and people from venue to venue has all been a “super unifying” experience.

The club’s diversity, although representing Mexican identity, has allowed the band to keep the culture of a typical mariachi band, but also to “experiment with [their] concerts.” This means that they’ve not been the most traditional, but in their efforts to preserve the culture, they have brought an enthusiasm for mariachi that isn’t commonly found in New England like it might be in parts of Texas, California, or Mexico.

This upcoming spring, they will be playing several concerts. Although not all venues have been booked, be sure to check them out tonight, at Cultural Rhythms, and at Palooza during Visitas!

For Fuentes and for many others since the club’s founding in 2001, the music and culture have been very grounding. From practices to parties, the team has grown very close to each other, and it shows in their visible connection. On a final note, my own experience with mariachi has always been that the vibe makes you feel happy. Having grown up in the middle of West Texas where my high school was 80% Hispanic, I experienced the culture every day, and talking to Fuentes made me feel at home. I look forward to their concert and hope to see many more in the future.