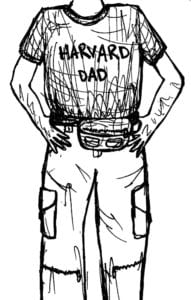 Who did you bring along to campus?

Junior Family Weekend: three words that can fill a Harvard student with dread, excitement, or, for the internationals among us, indifference. We all know that the Harvard family is as diverse as its student body, so here’s a small sample of the personalities you may have found descending upon the Square this past weekend.

Without beating around the bush, any Harvard family event inevitably brings a large proportion of alumni back to its campus. While the Harvard College Fund won’t be complaining, for family members and tour guides alike this can lead to an excruciating number of “Back in my day…” and “This is how we used to do it…”, all employed in a semi-passive-aggressive way to remind everyone that yes, they went to Harvard. From Final Club legacies to old Harvard Band trumpeters, each alum has their say about how the campus is being run, and how their child just isn’t having the grand old experience they were having. Throw in a comment about Harvard’s progressive liberalism, and the set will be complete. Yet we can’t complain: With these inevitably being the family members that keep the endowment fund ever-flowing, there’s a fair chance that they themselves funded the above-average food that magically appeared in the dining halls over the weekend. So while we may have our reservations about our alumni, remember those cheese and crackers you spent so long enjoying in Winthrop d-hall for Saturday lunch, and just be grateful we can prosper in some way from Harvard’s controversial legacy system.

With Harvard being the type of place that it is, it is of course inevitable that Junior Family Weekend brings with it a whole host of the weird, wacky and wonderful family members that helped create the Class of 2021. With this comes those who are genuinely interested, if not a little bit intimidated, by what actually happens behind the walls of the classrooms. For those students unfortunate enough to have class on Fridays, you may have noticed the back rows of your lectures filled with over-eager parents, oblivious to the fact that they may have walked into one of the most boring, attendance-mandatory classes to ever have been given at Harvard (at least in the eyes of the 50 half-asleep students enrolled in the class). Everyone knows that class on Friday should be forbidden, and, if family members spent more than one weekend at this place they’d be sure to realize that as well. Yet there they were, more than doubling the numbers of each class they walked in. At least the professors finally got some participation in their Friday lectures.

Classes were not the only place where the academic family members thrived; the obnoxiously loud “Harvard Family of 2021” pin not only helped distinguish family members from generic, anger-inducing tourists in the Yard, but also gave them free access to various places on campus, such as libraries and art museums. These acted as the perfect escape on Sunday afternoon, when the novelty of having parents on campus was waning thin. Shipping the academic family member off to the closest museum, and hoping that they managed to get lost in the Harvard Museum of Natural History in the same manner that you do every time you enter into that maze, was possibly the best move of the whole weekend. Not that we are speaking from experience, of course.

We all know that Harvard’s social scene can be lacking at the best of times, so what better way to spice things up than to throw some family members in the mix? For those who were daring enough, this weekend brought up some great opportunities for family bonding, Harvard night-life style. What better way to understand Harvard’s late-night culture than an El Jefe’s trip at 12am? Mather JCR could always bring back memories of your family members’ good old days in college, if their experience also consisted of packed, uncomfortable rooms where the windows were literally dripping with the condensed sweat of a thousand first-years. Word is that family drinking games happened every weekend night at the Fly, but of course, how would we all know about that? Ultimately, maybe it’s best to not have let family members venture out into Harvard’s social scene: If nothing else, you don’t want your non-existent, questionable social life to be the but of all the jokes at the next family gathering.

For some, Junior Family Weekend is the time where their life gets back on track. Their bed can finally be made, their room cleaned, and their washing done, all by their loving family members. These are the students who are in their third year of college, but still haven’t gotten round to finding out where the washing machines are in their House, and will probably manage to graduate without ever having cleaned their dorm room. A student springs to mind who refused to pay the extortionate prices at CVS for a new bottle of body wash, but simply did not have time to venture out to somewhere cheaper, and so had used shampoo instead for two straight weeks. In swooped the family members this weekend, turning a blind eye to their child’s inability to actually live and instead providing the care and assistance that was so desperately needed. Long live the distorting effect that Harvard has on some of its students’ hygiene priorities, and here’s to hoping that those students either find someone who can turn a blind eye, or that they earn enough money in the future to employ a full-time cleaner. Boy will they need it.

Mimi Tarrant ‘21 (ameliatarrant@college.harvard.edu) had fun observing all the awkward parent-family interactions that happened this weekend on campus.