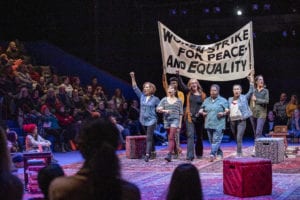 Gloria Is My Life

An impactful play takes the stage at Loeb

“The biggest sin is sitting on yo’ ass!” laughed the short actress playing Flo Kennedy. Which is exactly what I was doing. On a wooden bench with a plush, brightly primary-colored pillow behind me in the Loeb Drama Center at A.R.T., where Gloria: A Life was playing. I was sitting and watching Gloria Steinmen’s glorious tale be told before my eyes, on a floor made of a patchwork of old Persian rugs, making it look more like a church basement than a stage. All it needed was generic-brand cookies and styrofoam coffee cups. Plus, there was already a middle-aged woman talking at me. Patricia Kalember, as Gloria, strode onto the stage like there was no place she’d rather be and welcomed us all to the show. The fourth wall crumbled and she trampled the pieces under her black platform shoes. The windblown curls and bell-bottom jeans reminded me of my mother’s middle school photos. Six other women of all shapes, colors, sizes and ages materialized from within the audience and joined the bright ball of joy standing center stage.

The older members of the audience were transported back to the ’50s. I was living it for the first time. Projectors brought a TV to life on the white panels hanging above the stands across from us. I had to giggle at the blatant sexism that filled the ads. Is it any better now, I wondered to myself. Though (maybe) less visible, is it any less prevalent? Or has it just snuck in the back door of our subconscious instead of knocking on the front?

In the swinging ’60s, we watched Gloria struggle as a young female writer in a male-dominated field. Again, the daily, degrading harassment made me laugh to myself quietly because they felt too absurd to be true. But as Gloria explained to the audience again and again and again, “You can’t make this sh*t up!” You can’t make up sh*t like being thrown out of a hotel for looking like a call girl, being sent undercover to work as a Playboy Bunny, and having to get a doctor to forge documents in order to get an abortion. Things like that have simply never happened to me.

On reflection, this may be why I’ve never felt very connected to the feminist movement. My roots run deep in southern Iowa. It wasn’t the hippest or most modern place you can grow up, but I never felt the heavy hand of the patriarchy in my town of less than a thousand. My teachers didn’t mind that I was smart, my coaches encouraged me to be athletic, and my peers didn’t stop sitting with me at lunch when I decided to stop shaving and cut my hair short. That being said, some of my closest friends were the ones who introduced me to the term “feminazi.” “Feminism” was a dirty term for radicals, for Man-haters. And I didn’t hate men. I loved my dad, my little brothers (most of the time), and my male friends. “I’m not a feminist,” I determined after taking Intro to Sociology junior year. “I’m an egalitarian!” Men weren’t the enemy. Gender was.

But even though it didn’t seem like it in my small hometown, men and women today are anything but equal. Back in Cambridge, I watched as Gloria spoke with women about their coat-hanger abortions, wife-beating husbands, and suffocating careers as housewives. I realized I wasn’t egalitarian. I was just lucky. These weren’t my stories, but there was no reason they couldn’t be. When asked about the feminist movement that she was creating out of her own and many others’ blood, sweat, tears, and words of empowerment, Gloria said, “The problem isn’t men, it’s the masculine role.” Her words resonated in my heart, in my core, and in my veins. “We need to liberate men, too.”

Yes, I thought! That was exactly what I had been thinking for four years now! If this were feminism, I loved feminism! If you Google “feminism,” as I later did, it will tell you that it’s the advocacy of women’s rights on the basis of equality of the sexes. Feminism is equality, despite the slander its opponents throw at it. This is Hamilton, I thought, but instead of the founding fathers, it’s the founding feminists. Just without the music. At this point the seven beautiful women on stage unleashed a slow a capella version of “We Shall Overcome.” I stood corrected.

About a week ago, my best friend commented that he had never seen me cry, and I couldn’t remember the last time I’d shed a tear. Probably while watching Les Miserables. (You will notice that musicals are a common theme in everything I do. I don’t apologize.) In the semi-darkness, my friend on one side and a stranger on the other, surprised tears sprung to my eyes. I ducked my head into my sleeve and sniffle-sobbed as quietly as I could while Gloria told us about her mother and how society had snuffed out her bright future. We went back to a time that I had lived before, watching on the hanging screens as women all over the world, including the actual Gloria, marched in protest of the last U.S. presidential election.

Afterwards, in what the play called a “talking circle” with the audience, I would have gone for the microphone if I thought I could get out a sentence without sobbing. Instead, I listened to other audience members, including a 13-year-old girl who was there with her two moms and grandmother. They were all “kick-ass” feminists, which made her one too, “I guess.” She had started a secret Gay-Straight Alliance club at her school, through which she had educated a girl who “didn’t even know what bisexual was.” Another talked about the struggles of being a young black woman, and speaking out even though “the adults give us a voice, but don’t want to listen.”

Young people may speak of hope for the future, but the gender gap sitting in front of us is still gaping at us. By the time they’re old, I hope these women don’t have to carry signs saying “I can’t believe I’m still marching for this sh*t.” As for me, I will do my best to take on Gloria’s dare to “Do something radical today!” in order to fight for equality. She has given me hope as a young writer who has “radical” thoughts about gender slow cooking in her head. (We can talk more about gender abolitionism later.) That is what brought me to tears: the knowledge that I can do what I love to brighten the world. My depth of connection might also come from the fact that Gloria and I both share the background of being white Midwestern women (corn connects), but I hope that the message of justice and equality can resonate with everyone’s humanity, regardless of chromosomes or country. Many of us in the audience, especially me, were already sympathetic to the cause of gender equality, so maybe no one’s ideals were radically changed, but hopefully this was a small step in the right direction for everyone involved. It was for me. “You write whatcha need!” Gloria said about her book Revolution from Within. I hope I’ve done her proud because this is what I needed. Thank you, Gloria.

(Gloria: A Life plays until March 1st at the Loeb Drama Center at the American Repertory Theater.)

Jen Eason (jeason@college.harvard.edu) has many more thoughts on jender (he he).