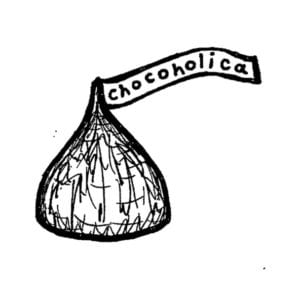 Four Ways to See a Party

Iwent to Chocoholica, the annual Adams House Valentine’s Day Party. Those are the facts. The rest is a story which, depending on where I center it, I could tell in any one of a hundred ways.

I could start with the apprehension of the crowd waiting outside the Adams JCR. Adams HoCo had been publicizing the event in a big way, even delivering physical tickets to Adams House residents. Some said it was technically supposed to be restricted to Adams residents and their plus-ones, but nobody was going to check IDs and nobody particularly cared either way. A group of twenty-odd eager students is forming around the couches at the base of the stairway. Thumping, muffled, and incoherent music filters through the locked wooden doors. Focus on this moment, and Chocoholica is another student party, a big one, sure, but nothing more than an excuse to drink a bit and hang out with friends.

But that is dull. I could start somewhere else instead. A 1999 article in The Crimson (the last year they seriously reported on this) quoted a student using the word “orgiastic;” the invitation cards this year described the party as “~erotic~” and featured a picture of a chocolate man, reminiscent of Michaelangelo’s David, with his crotch blurred out. There were rumors that HoCo members would dress up in French maid costumes or tuxedos to serve chocolate to the guests. By reputation, Chocoholica could almost be a Sex Week event. It is decadent to the n-th degree, utterly depraved, and completely unashamed of itself.

Another moment, another vignette, flips this on its head. It’s 9 p.m. exactly, and the doors are finally open. The lighting is the first clue that something is wrong here. It’s on full, as bright as I would want it if I had to do a pset in the corner. It is not a light for orgies. There are no French maids, and only one person is wearing a leather collar with spikes. There is, however, a table full of chocolates shaped like male and female genitalia. I select a vagina in a little plastic baggie of the sort generally used to hold much more interesting stimulants, un-package it, and eat it in one gulp. The bar is staffed by a very polite man who tells me that he has no sodas but that I can get one from the dining hall, and, as if I need any more confirmation of how little genuine debauchery there is going on here, I notice someone I recognize from my Harvard College Faith and Action Bible Course tucking into a pair of chocolate breasts. I chat about the French existentialists with a Philosophy and Comparative Literature joint concentrator. Looked at in this way, Chocoholica is a fable with a moral: a Harvard party is always a Harvard party, and any efforts to elevate it are doomed to become self-parody.

So, let’s not look at it that way. Let’s start our story half an hour later, when Sean and Judy Palfrey, Adams House Faculty Deans, are handed a microphone to, in what is ap- parently a Chocoholica tradition, tell the story of how they met and fell in love. This, I quickly realize, is serious business. I’m with a fairly loud group of people who don’t all immediately quiet down, and we are shushed almost angrily by the entire room. People outside of the JCR are chatting and walking around, so the doors are shut. One student, clearly The Chosen One who Understands the Sound System, positions himself to fight the inevitable feedback. Something is about to happen.

Sean goes first. He wears an Adams House tank top over a black T-shirt and tracksuit bottoms. He lists, first with slight humor and then with tenderness, the things Judy did through which he first realized she loved him. After Sean went to New York to study, we learn, Judy followed him. This was in defiance of her family, who held that Johns Hopkins was a better university than Columbia. He wraps up with “I never wanted to be the best actor. I wanted to be the best supporting actor,” a line that could be the corniest thing to happen all night, but which, in his tone of simple sincerity, works perfectly. Judy then tells us that “A date [with Sean] could be just a very special walk. A walk by the river. Or, as we were getting more serious, we would walk down Brattle Street, and Sean would say ‘Would you like to live in that house? Or that one?’” Ten or so people have sat down on the floor in front of the Deans, legs crossed, like children at storytime. No-one says a word.

One more moment. I’m leaving the party. A man and a woman sit together on a couch outside. They kiss, once, briefly, chastely, on the lips. They smile at each other. They don’t notice me and I don’t intrude. Look at the right moments, and you can understand what Chocoholica is all about. It’s not sex or cocoa beans. The Adams House Valentine’s Day party is an earnest celebration of wanting to spend the rest of your life with someone. No wonder the promised orgies never materialized. If your relationship centers around vaginas, chocolate or otherwise, it has no place here.