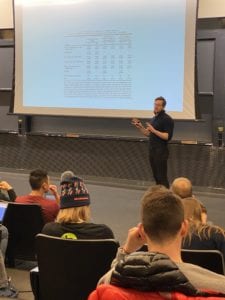 The Independent sits down with lecturer Judd Cramer

The responses have been edited for brevity and clarity.

The Independent recently had the chance to speak with lecturer Judd Cramer, who, alongside serving on the undergraduate advising team for the Economics department, currently teaches ECON 1042: Sports Economics. He shed light on the importance of sports economics, illuminating the opportunities it has in store for students and prospecting the future of the field.

INDY: Why are you interested in sports economics, and what initially piqued your interest in the subject?

JC: As a kid, I was a huge NY Mets fan, so just following along with that team really instilled in me a love of sports. I’ve been playing my whole life… I wanted to stay involved when I went to Northwestern University for undergrad. I studied labor economics; I wrote my dissertation on long term unemployment, was working in the Obama administration on that and then when I came here, I thought that’s what I was going to do, but it turns out there was a lot of demand from the students for Sports Econ. They asked me if I would be interested… and I was really excited to take the time to develop a class, so I did a lot of reading on my own and structured this new class, and I’ve been teaching it since then.

INDY: Does this class mainly apply to US sports teams, and do you think it’s really accessible to international students, or people who have never taken an economics course before, or don’t play sports?

JC: Yeah, I’m trying to make it as accessible to everybody as possible. Last class, for example, I discussed bicycle racing; there was some rule change in the Tour de France, and then we talked about corruption in sumo wrestling… What I really like about sports economics is that [you] can say, “Allan Iverson was the best player of all time,” and I can say, “Actually he wasn’t that efficient because he was shooting a lot of long two’s, and even though he scored a lot of points, he took a lot of shots.” In my mind, to resolve some of those debates, you do need a little bit of statistical training, but I try to make it as accessible as possible.

INDY: How long have you taught this course for? How long has this class been taught at Harvard?

JC: I’ve been at Harvard for four years now, so I taught it to sophomores for two years and that was more of an introductory level course… and then this is my second year teaching it to a big group. The interest in sports has only increased, so that’s why I was approached to try to teach the class, and I was super happy to jump in.

INDY: Is there a typical demographic of students in your class?

JC: In economics in general, we have a lot of concentrators who are athletes, but I was really happy with the amount of representation I’ve had in the class both this year and last year. I’ll talk about baseball, and I’ll have maybe forty percent of the class [that] won’t know the rules of baseball at all; so, we’ll really start from the bottom and build up. I did a paper about pulling the goalie in hockey: if the person sitting next to somebody is on the Harvard hockey team and has been playing hockey their whole life, it’s going to be hard in two lectures to get them up to the same level.

[Diversity] is something that I’m very aware of. In sports economics, there’s been a huge overrepresentation of white, cis males, so I’m trying to do whatever I can to highlight both sports where people aren’t represented in and papers written by some of the underrepresented groups.

INDY: Do you know if a decent amount of your students go on to work in the field of sports economics?

JC: My sense is that their first job out of college, at least [Economics] concentrators, are doing a little bit more traditional Wall Street consulting things, but I wouldn’t be surprised if in ten years a lot of them make their way back to sports. I played on the club baseball team at Northwestern… none of us went into sports, and we just had our ten year reunion, and one of my friends is the head of the draft for the Toronto Blue Jays and another is working for the Yankees and now I’m teaching sports economics. It’s like, you have this interest and then I think through these winding turns, I think people will make their way back there. But not too many go directly there. Although last year, there was a company called SimpleBet that was trying to use machine learning to revolutionize sports betting, and I think they hired four or five students just from my class.

INDY: What are the kinds of jobs and opportunities that sports economics students can pursue?

JC: We talk about Moneyball a lot; that was sort of the first time in baseball that they used numbers to figure things out with the Oakland A’s. Jonah Hill in the movie says he went to Yale, but he was actually based off of Paul DePodesta who was an [Economics] concentrator at Harvard. So actually there are a lot of [Economics] concentrators, and actually the Cleveland Brown’s new General Manager is a 32-year-old former [Economics] concentrator named Andrew Barry; he played on the football team… they can use [the skills that I’m teaching them] in sports, but they can use it in business or in management or in government or working for a Fed or something like that.

INDY: Would you say there has been a push for teams to hire highly educated, Ivy League students, rather than say, former players to work on sports analytics?

JC: Yeah, the balance is shifting. So famously, John Harbaugh – who is a coach of the Baltimore Ravens – changed his fourth down strategy dramatically from last year to this year. There was a profile that said the team hired a 24-year-old behavioral economist from Yale, and that person sits in the booth and calls during the fourth down, “Go for it, field goal!” based off of his knowledge. The coach is listening to him, and the Ravens ended up having the best record of any team in the regular season. And my fear is that if there is an overrepresentation of only Ivy League-educated economists, and the only people that can get in are those with an Ivy League degree, then we will definitely not be reaching the groups that we have to. But I think there is definitely more of a push for people who are speaking the language of analytics. And it used to be that all strategists were former players, but now you have more people who are outsiders.

INDY: Have you noticed an increase or decrease of interest in the field of sports economics, both on a general level, and specifically to your class?

JC: I was a consumer of podcasts and writings and ESPN articles where they would analyze games, and the way that they would break these things down is very similar to the way that they had for the past four years. And there was no mention of analytics. It was more just, “Is this a good decision or a bad decision?” based off of the outcome, based off of the thought process that was going into it. Now you sort of see sports economics and the terminology that we are thinking about sort of creeping in everywhere, into all the mainstream podcasts and articles. They are all starting to use the language.

INDY: Have you been involved at all with the Harvard Sports Analytics Lab?

JC: Yeah, I’ve been involved a little bit; I’ve tried to direct students to go to check it out. The original founder of the Harvard Sports Analytics Collective (HSAC) is a good friend of mine. He was a director of analytics for the NBA, so I always get emails from them around the MIT Sloan Sports Analytics conference, and in a couple of weeks hopefully we will be able to do some joint programming.

INDY: Are there many sports economics classes offered in colleges in general? It does not seem like a super common field.

INDY: How do you envision the future of the field, with this increased interest in sports analytics?

JC: Well, at the end of a lot of papers, especially traditional papers, we highlight some biases that have happened – like coaches being too conservative, or not pulling their goalie early enough… we say, “This is what the economics say to do, this is what the coaches say to do, no one is listening to us,” so we have sort of had this mindset of outsiders. But more and more, what we are saying is starting to be accepted. Part of me loves sports for the randomness that can happen, so I do hope that we don’t suck all of the fun out of these games by fully solving them, but I do think the nice thing about sports is that it is a language through which we can get in contact with a lot of people and sort of teach them.

What I am trying to teach my students is not only about sports. I have papers about how referees in the NBA discriminate against African-American players. The NBA is three quarters black, but the referees are three quarters white. And white referees tend to call more fouls against African-Americans than they do against white players, relative to African-American referees. So the nice thing is that we learn tools that we can apply to a lot of these societal issues. So with sports analytics getting more and more popular, we learn how to look out for these biases, learn how to notice some of these problems, and have the toolkit to call it out and work on solving them.

INDY: To what extent do you think a sport can be “solved”?

JC: In general, when I was a kid, the idea that a computer could ever beat a human in chess was something that everyone was really afraid of. Now everyone just accepts that. You don’t want to tell a player that they had a 45% chance of making a shot. So the idea that somehow destiny and randomness is going to be completely subsumed, and you flip a coin to randomize a play, can take away from the fun of sports; sometimes you need to let the players do what they feel is best. So you have to balance what you predict the optimal play will be versus what the players are really feeling at the moment. We will have to think about how to keep players motivated.