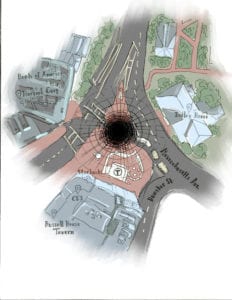 Culture, Without A House

An experiential intrusion into forgotten lives at Harvard

Harvard’s campus gets swallowed into oblivion at its very epicenter: Harvard Square. Students, visitors, and residents alike eschew its central trigon with careful steps. They trudge about it with syllabus-leaden feet from Yard to Coop. They make erratic late-night CVS stops, or Smith-to-&Pizza mid-project runs. Congregations of visitors form and dissipate under the shouts of student guides or protesters for Taiwan. The music of the corner artist overflows into the central crossing, where all paths converge before heading to the far-flung limbs of Harvard’s campus.

What lurks in plain sight of this daily come-and-go of Harvard life is the small navel of the square: CultureHouse. The former Out of Town News kiosk has been refurbished into a pop-up “community space’’ by the nonprofit dubiously titled CultureHouse. According to his website, founder Aaron Greiner recreated in Harvard Square a pattern which elsewhere “‘increased livability and joy,’ ‘addressed a community need,’ and ‘attracted people and gave a reason to stay’ in the area, making it more livable and vibrant.” The discrepancy with its current reality borders on hypocrisy.

I entered CultureHouse without much notice from the cloud of youths puffing outside: cold and smoke. My first sight was a counter-service manager. My gut screamed hipster! at the sight of his red beanie (I may be biased). He inched forward and I uncertainly asked whether he needed me to sign in “or anything…?”

“No!’’ The glimmer in red beanie’s eyes denoted his eagerness. An actual client of Culture had come into its House! Effaced behind his pale gray MacBook, his hand compulsively clicked the tally counter. I turned to sit at one of the two tables at the far right of this “community space”. There was rugged plywood, straight-back chairs and a phone-charging station encircled by uncovered hinges… all supposedly part of the rusticity of the place. Wooden long-chairs arranged to mimic a campsite and a small platform hosting a plastic swing complete the typical playful look of the communal space. Think of an eclectic coffee house, without the coffee.

Perhaps the Culture in the House comes from the art pieces exhibited on its walls. Perhaps it comes from the communal chalkboard bordering the facade of CultureHouse. Begging the question, “What do you love about Cambridge?”, the board stands as an open invitation for everyday passersby to express their own mementoes of Culture in colored chalk. One response plainly states: “Feed the homeless.” Perhaps Culture comes from the homeless vagrants breathing theirs in and out of this House. Too bad no one notices.

I sat down and pulled out my book. A cacophony of voices almost concealed the cool ambient coffeehouse playlist. Too close to the charging station, I pressed against my table when a brown jacket approached. “Why doesn’t this charge, does anyone know?’’ The half-dozen homeless youths ignored the question. “I have the same charger as you!’’ I noted. “Yeah, but it’s not charging,’’ answered the middle-aged man. A flash of red. “Is everything okay here?’’ I hadn’t even seen the hip manager approach. Before I realized he had come to my rescue, the homeless man grumbled: “Yeah, she’s fine…’’ The resentment… Conspicuous for only a moment, I returned to a bubble of safety and turned invisible in plain sight, much like the squatters of Harvard Square’s CultureHouse.

A young man got up and left his arm-chair. As if by osmosis, in an instant he appeared outside the window. Worlds away behind him I could see the Cambridge Trust Company. In a flurry, I saw a black tracksuit get up. His girlfriend started pelting the window: “No… No! Don’t! He’s going to smoke!” Whomever she appealed to heeded her warning. The young man came back in. About 45 minutes later, he would sigh, saying: “I wish I was high.”

For a moment, all was normal inside the communal space. The swing, occupied by its absent-minded pixie hair lady, head lulling. The long-chairs, hosting the dark tracksuit girl and an older lady, mauve-clad. Well, almost. The girlfriend had to reprimand the charger-seeker once she got back from the window: “That’s my spot, get up!’’ He did. She nestled in once more under her dusty rose duvet. Everyone and anyone was talking. At a table behind me, someone who’d just arrived was listening to mash-ups on YouTube. There’s a promise of free wifi and order at the CultureHouse.

The space seemed ready to settle when its membrane burst again: “Come the f*ck outside!’’ A raging ball of muscles stormed from the exterior. The red-faced youth had called on the man sitting behind me. His pointed finger trembled under the might of his ire. The beanie awkwardly charged at him, but the youth was already turning on his heels. He, as everyone, understood that the interior of this space was not for fighting. With his gesture still resonating inside this “vibrant space,” all froze in expectation. The mash-up lad wouldn’t go. After all, as he put it, his aggressor “can’t do nuthin’ in here”… Unfortunately, a mediator came through. “Come on man, come outside.” With a grunt, the chair was lifted, someone was told to “watch my stuff,” and our man left the House.

They were right in front of me, on the other side of that glassy membrane. Fists were flying without much technique, and my former neighbor’s head shook the windows when he crashed into them. The punches soared until one opponent could be brought in check. That meant someone had to go down. A flat thud signaled the end of fight: the encounter of skull and pavement. The two gentlemen got up. There was a striking moment in which both paused and stared at each other. The one with the flaming ire turned and left. “He had a little extra blood flowing,’’ the mauve-clad lady deeply and slowly articulated.

Before the mash-up hero would cross back into the safety of their CultureHouse, the charger-seeker came in beaming: “That’s my son!” The teacher’s adamant praise continued:  “He’s learned how to fight.’’ Whereupon, the youth entered: “I don’t bruise, told ya’ I’m not playing.” “Oh, look at her smile,” replied the father. Turns out the warmonger had struck the lad’s lady across the face. In retaliation, our hero had, as he now boasted, “split his face.” I was pondering the aggressor’s logic for this attack from an inside position which blinded me almost as much as my daily habits. Cutting my thoughts, the old mauve-clad lady muttered “Well, you didn’t split it, you just cut his face…”

On that note, the council assembled. Around the nonexistent campfire, the vagrants settled to chat about the fight. Unrattled, the smoking youths outside went on being ignored. Inside, the conversation skipped round robin across the personal interests of its interlocutors. “I used to put pickles in my ice cream when I was pregnant’’; “Ewwww’’; “Can I ask you a question? Who’d you used to date in the past, cause you look mad familiar’’; “Where’s my headphones? They’re not on my head!’’; “I used to live out in Dorchester.”

I had been sitting in CultureHouse for no more than an hour, one Saturday’s early afternoon. My intrusion within this cell of culture tore apart my understanding of Harvard’s heart. For a moment, I was a parasite in their home. For a moment, I saw them. Extenuated by the discovery of an excised world, I decided to pass back two hours later, around 3pm. CultureHouse’s Facebook page mentioned an “Art-Processing: Climate Change’’ workshop. Inside? A group of women of all ages. Crafts, warmth, and laughter. Around the CultureHouse, not a homeless youth in sight. This place cleans up well.

Ana Luiza Nicolae ‘22 (analuiza_nicolae@college.harvard.edu) writes Forum for the Indy, for eyes to open and hearts to feel.