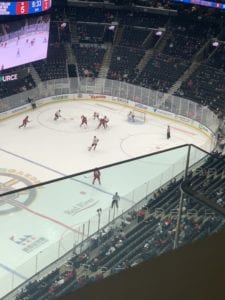 By GRAHAM WALTER and EMILY RYAN

For sports fans growing up in Boston, nothing quite compares to the Annual Beanpot Tournament, a competition among four college hockey teams to which every Bostonian, in one way or another, seems to have allegiance. During the first two Mondays of February, TD Garden to no avail fills with a crowd including die hard alumni, business folk streaming in after work, and local youth teams ecstatic at the thought of seeing their face on the jumbotron. For many rising young players, playing on the same ice as the Boston Bruins is the dream. This year marks the 68th Annual Beanpot Tournament, and the Independent reported on the games scheduled for both nights.

It was 5:00pm, and the stadium was relatively quiet on both sides—to be expected from this time slot. In the rafters, the Northeastern fans filled the balcony exponentially faster than fans on the Harvard side, in anticipation of the Harvard v. Northeastern game.

The Crimson clinched a power play goal by Jack Drury ‘22 to take the first lead early in the game, not surprising for the number one power play in college hockey. Northeastern was resilient and came right back at Harvard with a power play goal to tie it up. Unfortunately, the Crimson could not answer fast enough, and the Huskies scored again in the beginning of the second period as yet another power play expired. At this point, the difference in the fan base was stark; any Harvard fan would find themselves envious of how energetic and invested the Northeastern fan section was. Any harboring concern about this affecting the outcome of the game would be valid. The Crimson, however, peristed, not appearing deflated.

Defenseman Marshall Rifai ‘22 was proud that the team never gave up: “In the third period we were really tough and resilient, we outshot them [Northeastern] 14-7 but the Northeastern goalie stood on his head which eventually helped them seal the win with a late empty net goal.” This upkept the energy of the game until—with just a minute left to play—the final goal was made. When asked if he noticed the difference in crowds, Rifai responded, “I understand we are not going to be the team with the most fans at the game, so if anything, we fed off the energy against us in the rink.” This was visible in the unwavering efforts of the Crimson throughout the game’s entirety.

Captain Nathan Krusko ‘20 echoed similar sentiments about the role of the crowd in a game like a Beanpot rivalry: “I thought the crowd was great. Because we played the early game, you kind of start the game with a quieter building, and it increases in energy as the night goes on. By the middle of the second, you begin to notice and feel the moment build.” Krusko appreciated the competitive energy even between fan sections, as it’s part of the Beanpot energy and ultimately does not “contribute all too much to the momentum of the game.” He further remarked, “Maybe it’s because they sit so high up, or maybe it’s because even at some home games our fans are outnumbered, but I don’t think that our lack of fans hurt our ability to gain momentum.”

After last year’s loss to Boston College (BC) for the championship, Harvard was determined to take home a W this year.

Three minutes into the game, BC forward Matt Boldy ‘23 went off less than a minute into the game for slashing. During the power play, Casey Dornbach ‘22 took advantage, sniping Harvard’s first goal past Eagle’s goalie, Spencer Knight ‘23. The early lead was threatened after Dornbach was whistled for cross-checking in minute 8, but despite the additional pressure, Harvard goaltender Mitchell Gibson ‘23 stood like a wall.

In the 14th minute of the first period, however, Harvard gave up its first point when forward David Cotton ‘20 scored in the top-shelf to tie it up at one. Three minutes later, Boston College took its first lead with Jack McBain ‘22 backhanding a rebound after Gibson’s initial save. The 2-1 advantage shifted the momentum and weighed on Harvard at the end of the first period. The Eagles had more shots (16-11) and despite Gibson’s big saves throughout the game, the relentless attack by the Eagles would sneak several more into Harvard’s goal.

The second period started with several nice saves by Gibson, but BC forward Logan Hutsko ‘21 had a breakaway that would increase Harvard’s deficit. Being up 3-1 early in the game kept the energy high for BC, and they put constant pressure on the Harvard team, which could not match this level of momentum. It was not until the final few minutes of the game that Harvard started to pick up on its presence around the rink.

The Eagles defense was seemingly impenetrable, and the Harvard offense could not get another shot off until nearly halfway through the second period. Harvard caught a break when forward Graham McPhee ‘20 received two minutes in the box for tripping in minute 11, but the Eagles capitalized on this penalty and ended up scoring another three goals. Boston College had a significant lead, and immediately after the breakaway of Alex Newhook ‘20 and subsequent shorthanded top-shelf goal to make it 4-1, McBain scored another shorthanded tally about a minute after. 5-1 was the score.

Harvard’s RJ Murphy ‘23 scored another goal, flicking the 2nd goal past Knight to cut the lead back down to 5-2. Harvard at this point had 5 shots in the period as compared with BC’s 15. With only 24.2 seconds left, Boldy scored his second goal of the night on an odd-man rush. The Eagles’ led 6-2 leaving the period where they nearly doubled the amount of shots that the Crimson had taken.

Even though the Crimson picked up their pace in the final period, this was not enough for the Eagles to hold them scoreless and to put another one in themselves.

Unfortunately, the consolation game ended in a 7-2 win over the Crimson this past Monday at the TD Garden. In the second period, Boston College hockey scored a quick four goals, with two shorthanded tallies Harvard would not be able to answer. Six Eagles players scored, including two from Jack McBain. Forwards Dornbach and Murphy had Harvard’s two goals. Defensively, goalie Gibson had 24 blocked shots for Harvard, and Cam Gornet ‘20 replaced him to stop another five. The BC goalie stopped 26, and with his help, the Eagles won the consolation game.

The no. 10 ranked women’s team, which had their consolation game this past February 11, unfortunately suffered a similar outcome as the men’s team. At Boston University’s Walter Brown Arena, Harvard played a strong sixty minutes, but netminder Kelly Pickreign ‘22 filled the entire net, stopping 36 of 37 shots. Kristin Della Rovere ‘23 had Harvard’s only goal. The Crimson goalie Beth Larcom ‘23 denied 22 shots, but three shots coming from Alexie Guay ‘23, Delaney Belinskas ‘20, and Hannah Bilka ‘23 managed to get through. Even though Harvard got 11 more shots off, Pickreign’s excellent performance made BC unstoppable.

In the first period, Harvard controlled the puck for most of the opening minutes. A hooking call on Crimson forward Dominique Petrie ‘23 gave BC the opportunity to take an early lead. Guay deked out a Harvard guard which gave her an opening to shoot a laser ten minutes into the first. BC held the 1-0 lead despite being outshot at the end of the first.

Once again, the start of period two started strong for Harvard, but BC slipped one more goal in despite a smaller time of possession. Harvard had six shots on target compared to BC’s one, but that one shot from Belinskas was set in the five hole perfectly and was the one shot in the opening 5 minutes of the 2nd to count.

Harvard continued to pepper Pickreign with shots, but she somehow managed to block every one of them. Three minutes after Belinskas’ goal, Eagles forward Bilka deflected the wrister from Hadley Hartmetz ‘23 to sink another goal and make the score 3-0. Despite another barrage of shots by Harvard, none passed into the net. The determination by Harvard was remarkable but had little to show for it.

In the third, Harvard still outshot BC, but only to have one great save after another. After 7 straight blocked shots, Kristin Della Rovere ‘23 finally put one through, but it was not enough to overcome the Eagles and Pickreign’s career high 36 saves. Despite their strong performance, Harvard women’s head coach Katey Stone had some criticism of the team:

“We have got to be better…we only have 29 reg season games and every one of them is huge. Whether it is on a Tuesday night, a Friday night, or a Saturday afternoon, we have got to show up…and I don’t think we showed up tonight. That is disappointing, and now we have an opportunity with four league games left to get a home ice playoff series. It’s in our hands. Let’s see what we’re made of.”

The Beanpot is imbued with both high energy and rich history, and these charged moments and memories remind us of the importance of attendance and peer support at sports games, which is often missing from Harvard Athletics games throughout the term. Nevertheless, it was impressive to see the ability of the Harvard team to turn a boisterous opposing crowd into positive motivation. We hope for a great rest of the season for both teams!