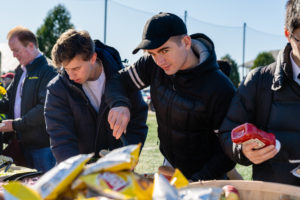 The “Massive Student Tailgate”: Harvard Comes Together across the River

Attendance was remarkably high at the Harvard-Dartmouth football game this past Saturday, with the stands of historic Harvard Stadium filled with fans, families, and friends alike. A total of 20,112 people came out to the home game, the most (aside from Harvard-Yale) since the Crimson’s 2008 meeting with Holy Cross. But what was different about this game that brought out such significant student attendance compared to the past games this season? It may have been due in part to what Harvard Athletics publicized as the “Massive Student Tailgate” that would occur prior to kickoff at 1pm.

Harvard is not exactly known for its tailgate culture. While many may look at the school as leading in academics, it is not commonly renowned for its school spirit, especially with regards to athletics; student attendance at typical sporting events tends to be low. Unless there is a championship game or important match, students don’t seem to find their way across the river into Allston, especially as the weather continues to turn south. Considered amongst students as one of the main sporting events of the year, the Harvard-Yale football game draws crowds of students that is unmatched by any other Crimson team.

For the 135th Harvard-Yale meeting last year, Harvard broke tradition and hosted the game not at historic Harvard Stadium but rather at Fenway park. Aside from simply changing location, Harvard denied the request of students to relocate tailgates to the on-campus athletic facilities. Whereas in past years there was the communal Harvard-Yale student tailgate held on Cumnock Field and Harvard sanctioned tailgates were held the tennis courts, last year Harvard administration chose not to allow the typical pre-game festivities to occur.

Prior to the game, students were told that Havard Athletics were planning on hosting tailgates by Fenway Park in an attempt to bolster student attendance at the game. By moving tailgates downtown, Harvard Athletics wanted to incentivize making the journey off campus and increase the amount of students who actually watched the game. Upset by this decision, over 700 undergraduates signed a petition to move the tailgates back to their original location on Harvard campus, a more accessible location for Harvard and visiting Yale students alike. This request was denied by the administration, with the expectation that tailgates would be able to be hosted by Fenway.

Come game day in late November, no tailgate space had been provided near Fenway. Instead, students were guided to attend pre-game events in the Science Center plaza. Unimpressed by the offering from the college administration, most students chose to attend private events to pre-game “The Game” itself. Many of these events were exclusive to members of specific social clubs or self-selecting groups of individuals. Senior Carrington Walsh felt that the “DSO and Athletic Department had a strong hand” in the lack of ability for students to come together, and “the administration actively thwarted the efforts of undergrads to enjoy and revel in Harvard school spirit.” On one of the few days of the year that Harvard students express collective school pride, many chose to spend the day with select groups away from the general student population.

Moving forward to the 2019 season, students have trickled into games in similar fashion as past years. The Havard-Brown game late this September showed promising spirit, with both Havard and Brown students meeting on Cumnock Field prior to the 7pm kickoff for a communal tailgate. While the tailgate wasn’t hosted by the college itself per say, students were given the ability to congregate on campus property for the event. Complete with rental U-Haul trucks, blaring music, and plenty of beer, the event gave off what one junior at the college described as “Harvard State energy.” Keeping the energy alive for the game, most students stayed around to catch the football game after the conclusion of the tailgate. Attendance was similar as in past years, with the crowd filling slightly below a third of the stadium’s capacity with 10,088 spectators.

This weekend, Harvard hosted what was promoted as a “Massive Student Tailgate” prior to the Harvard-Dartmouth game. Straying from the usual 11:30 am to 2:15 pm lunch hours offered by HUDS, this tailgate was marketed to undergraduates as the lunch option for the afternoon. The event served up burgers, salad, and brownies from 10:30 am until 12:30 pm; all but two of the undergraduate dining halls were closed for lunch in light of the event. Sophomore Grace Hulslander felt as if she would “have no other option but to come to the tailgate,” which admittedly is one effective way to enhance attendance, but others such as sophomore Kat Hairston felt “forced to go to the tailgate because of the closed dining halls,” a sentiment that does not emit much enthusiasm towards the game or spirit in general.

Despite mixed reviews in anticipation of the event, the venue was bustling at 11 am on that sunny Saturday afternoon. The crowd was adorned with various Harvard paraphernalia: DHAs, letter sweaters, logo laden t-shirts, and Harvard team gear. Mingling amongst themselves, students spread out in groups, large and small, and enjoyed the atmosphere of the event.

In addition to Harvard students were the families of the class of 2023. As the game occured over First-Year Family weekend, families of the youngest class were welcomed to join the pregame affair. Students and their families congregated on Mignone Field, notably emitting a more wholesome feel than the average college tailgate. To entertain, the college offered a mechanical bull ride, live music, and a restricted 21+ area where drinks could be purchased, though most students though were simply sporadically sprawled across the warm turf eating their lunch, awaiting the 1 pm start of the game. Unlike the stereotypical college tailgate, there was no (obvious) underage consumption of alcohol, no loud voices, dancing, or physical tailgates of trucks.

It seems like Harvard succeeded at incentivizing students to come to the game by hosting a tailgate prior to kickoff, indicated by sheer attendance to the game itself. While this number was of course boosted by visiting families of the first-year class, the student section of the game was noticeably more vibrant than past games this season. Prashanth Kumar ‘21 reflected on the importance of Harvard Athletics on facilitating school spirit through “fostering school wide activities” as a way to  “increase student participation and decrease exclusivity.” This event proved that given the space to do so, students will show up for their teams and take part in school spirit.

In the opinion of Olivia Chapman ‘21 “school spirit is such an important part of the American college experience,” and that spirit is abundant at events such as tailgates and sports games. When the administration facilitates, or even simply allows, the gathering of students in these spaces, students are able to participate in an experience that is somewhat unique to the American college population. Hurrah to Harvard for hosting this weekend, and here is to the hopes of harbouring future school-wide spirit through sporting events!