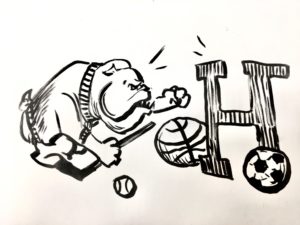 The Harvard-Yale Rivalry, Beyond Football

Competition between Harvard and Yale pervades other athletic teams, including volleyball, softball, and hockey

Though the largest manifestation of the Harvard-Yale rivalry is seen in the annual meeting of the two school’s football teams, the original matchup was not on the field but rather on the water. The rivalry dates back not to the first football game in 1875, but rather to 1852 when the schools crew teams met for the first time. Beyond football and crew, the rivalry’s palpable tension pervades many other athletic teams at these universities.

Most recently, women’s volleyball has brought their season to an end, finishing out the year with two matches in front of a home crowd this past weekend. Despite an overall game record of 5 wins and 18 losses over the course of the season, Harvard managed to overcome Yale this November with a 3-1 win. Falling short earlier in October with a 3-0 loss to the Bulldogs, the win was a huge victory for the Crimson women. Over the past 4 seasons, Harvard has tallied just two wins against Yale in their eight matches. Junior captain Evelyn Gray emphasized the “huge rivalry” felt between the two teams, noting that “it has been going on for a long time.” Commenting on this year in particular, Gray rejoiced, “the win was huge, party because it was during the Harvard alumni weekend.”

Also closing out their season in early November was the women’s field hockey team. Their impressive 13-4 record made it no surprise that their late September meeting with Yale was a success for the Crimson. The tight 2-1 win for Harvard was the seventh in a series of wins against the Yalies. While junior field hockey midfielder Sage Nye doesn’t see Yale as the team’s biggest competition, Nye noted, “Everyone knows that there is a Harvard-Yale rivalry, so we don’t want to lose for that sake.” The spirit of the rivalry does not always mean that the Crimson will be easily fueled toward victory. Nye emphasized that it is “always a battle… we almost lost freshmen year, and this year was really close too.” Yale is no easy competitor, even rallying up their audience days before the event; Nye reflects that Yale “definitely hypes up the game,” noting that “this year they scheduled their alumni day around the Harvard-Yale game.” Junior teammate Kolbe Keating echoed Nye’s sentiments about the matchup, observing that “each game against them could go either way… Yale always is exciting on multiple levels because it’s our first Ivy League game and we get to represent some of the top schools in the county.” Even though this season has concluded, the energy of the two teams will surely continue to drive healthy competition in years further.

Both the men’s and women’s soccer teams faced Yale during their respective seasons early in the fall semester. On the men’s side, the Crimson was defeated 3-1 by Yale in early October, adding to a series of losses against the New Haven team. The Crimson had yet to be beaten by the Bulldogs since the 2013 season, when the team took a 2-1 loss in New Haven. Sophomore forward Alex Debayo-Doherty commented that “the game is always fun” and “a rivalry for sure exists.” Despite this latest loss, the record stands at 55-39-12 for the Crimson against the Bulldogs.

Showing a little less give-and-take on the women’s side, the Harvard women’s soccer team overtook Yale 1-0 with a single goal for by Harvard first-year Gabby DelPico. The Harvard women have proved themselves to hold power over the Yale soccer program, losing only once to the Bulldogs over the past 12 years. Junior player Cammie Dopke articulated that the teams’ rivalry was heightened all the more “this year than in the past since Yale had a really good season.” Despite fluctuations, aside from a single loss in the 2017 season Harvard has won ten of the past eleven matches. The Crimson sits at a 32-9-2 record against the Bulldogs.

Starting off the competition season early in November, the men’s hockey team took on Yale just this past Saturday for their first of three games against the Bulldogs in the coming months. Taking the game with an easy win of 6-1 for the Crimson, the team looks to build on their record against Yale. Over the past three seasons the Crimson have taken four wins, two losses, and two ties against the bulldogs. As well matched teams, the first game of this season’s series shows promise looking forward. The teams will match up again on January 11th and February 14th in the latter half of the season.

In similar fashion, the women’s hockey team has experienced a mix of wins and losses against the Yale team. With two wins, two ties, and two losses on the record over the past three seasons, it’s hard to predict which rival will come out on top this season. Also starting off the 2019 season with a large triumph against Yale, the Harvard women took control of the game with a score of 5-2 victory over the Bulldogs. The Crimson women will have one more opportunity to crush Yale in early December.

The men’s basketball team holds an unfortunate record against Yale, seeming to take losses primarily during the Ivy League championships. Games between the two tend to be tight in scoring, many games coming down to just a single point difference. Looking back over the past three seasons, the Crimson have won five of their seven games against the Bulldogs, their loses in 2017 and 2019 both unfortunately occurring during Ivy League championship tournaments. Despite the fact that the record stands at  81-119, placing the Yale team at a historical advantage, the Crimson have high expectations of themselves for their upcoming games. The teams will match up on both February and March 7th in the upcoming season.

The coming season will be telling for the women’s side of Harvard basketball. Though the record stands at an overall 53-32 for Harvard, the past few seasons have ended in with one win and one loss for each team, exemplifying the back-and-forth rivalry between the teams. This season the teams will meet twice.

The Crimson lacrosse teams’ will continue their battles against the Bulldogs in the coming spring. The men’s team lost both games over the past two years but will look to break up their losing streak this season. As for the women, the champion of the annual Harvard-Yale game tends to go back and forth. With a win-loss-win over the past three seasons, there is no predicting how this season might end up. Sophomore Hannah Valencia commented that “regardless of the rivalry that occurs with each respective sport, there will always be a rivalry that exists through the spirit and culture that has been built between the two schools… even though they might not be our number one competitor that we’re battling against for a national title, we still want to win because they’re Yale and that rivalry will always be there.”

Yet another spring sport will match up against Yale in the coming semester: women’s softball. Although sophomore pitcher Grace Krantz observed that “unfortunately, the softball team and Yale don’t have beef,” there is “beef with Columbia and Dartmouth.” The Harvard team consistently comes out victorious from their series of games against Yale, taking the majority of wins over the past three years. Looking ahead, the team isn’t too worked up over the prospect of matching up this spring.

Regardless of the Harvard-Yale rivalry being felt differently across various Harvard sports, the H-Y football rivalry will be brought to New Haven this weekend. Football fanatic or otherwise, the rivalry between the institutions is enough to get anyone fired up for the festivities this weekend!