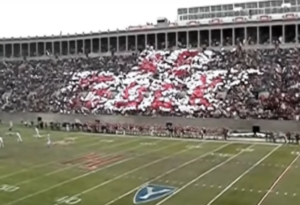 Can Harvard outdo Yale this year?

As the Harvard-Yale game draws near, chatter about the 135-year-long rivalry echoes in the hallways, in class, and most notably, on the walls of YouTube. On the Harvard-student-run channel, “OnHarvardTime,” over a decade’s worth of videos showcases the creativity – and sometimes cruelty – of the Harvard-Yale pranks.

Last year’s video mocked Yale’s attempt at prank videos, exposing their lack of satirical prowess. Pretending to be a Yalie and sporting a blue unitard, a Harvard student performed a screeching parody of “Take Me Home, Country Roads,” swapping those lines for “Take Me Home, Gothic Windows.” He confused football as baseball and sang painfully off-key, like a classic Yalie.

And there’s more: in 2016, Harry Potter hopped on the anti-Yale bandwagon in a video titled, “If Famous Movies Were About Yale.” Here, Potter is a prospective Harvard student who is thrilled to see hundreds of decision letters flooding his room, only to find out that he got into Yale. “Bloody hell,” he sighs. In another scene, Dorothy from The Wizard of Oz finds herself far from home, “surrounded by litter and strippers and crime, oh my!” When she encounters a scarecrow, a Tin Man, and a lion – lacking a brain, a heart, and courage – she concludes: “I must be at Yale.” Now that’s the perfect combination of creativity and cruelty.

Like any rivalry, Yale has fought back. Perhaps their most successful YouTube prank is from 2009, concocted by the “Harvard Pep Squad,” a group of 24 prank-minded students. Not one of them actually attended Harvard. Their mission? “Prank Harvard Like Never Before.” Disguised as Harvard students, the Yalies invaded the Harvard side of the football field and distributed red and white sheets of paper to fans, claiming that when they held up the sheets, they would collectively spell “Go Harvard!”

One fan was skeptical: “It’s not going to say something like ‘Yale Sucks,’ is it?” A Pep Squad member assured them it would not, urging a sheet of paper into their hands. But when the crowd lifted the papers, they unknowingly spelled out “we suck” – and only the Yale side could see the effect. Those poor fans – mostly alumni who just wanted to root for the college they loved – belittled by some students from New Haven? Utter cruelty.

Adding to this victory, Yale committed some major errors in their prank. Firstly, the Pep Squad failed at recreating Harvard apparel; their t-shirts were not crimson, but bright red. A disgrace. And the font of “Harvard” on their shirts was closer to the Comic Sans used in a Middle School English paper than Harvard’s true and classy Garamond. Even more, when a real Harvard student asked one of the disguised Pep Squad members which house they lived in, the person responded “Ho-Fo.” Ho-Fo? “That’s not even a real House,” the Harvardian asserted, correcting it to “Fo-Ho.” In a weak attempt to hide the mistake, another Pep Squad member interjected, “she’s probably drunk.” Come on, Yalies; you should know that no amount of tailgate beer could prevent a Harvard student from remembering their House name. That’s essentially our student identity. If you really want to act like a Harvard student, then think like one.

Clearly, the Harvard-Yale rivalry is never merciful, and never boring. Stay tuned on YouTube to see what OnHarvardTime has in store for this year’s annual prank video. Yale, we expect nothing more from you than off-tune singing, failed parodies, and “Ho-Fo.”

Mary Julia Koch ‘23 (mkoch@college.harvard.edu) is eager to write more about the shortcomings of Yale’s pranks.