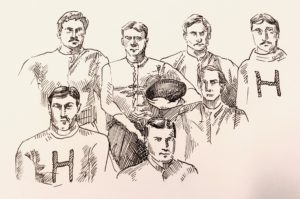 Every two years, Harvard students are lucky enough to be reminded of why Yale really is a safety school when they visit New Haven for the game. For those Indy readers who have yet to have the joy of visiting the city that Yale calls home, all you need to know is that it has one of the highest crime rates in America for its size. Pull that fact out next time you have a Yalie talking about how they chose not to go to Harvard, and you’ll be sure to have them stumped. We decided to find out more about people’s experiences in New Haven from the last Harvard-Yale matchup that was in CT, with the Indy uncovering the weird, wacky and worrying stories that Harvard students have carried with them ever since.

Oh, the Places You Will Pee

Here at the Indy, we do not shy away from somewhat graphic stories. With this in mind, we chased up multiple Harvard students who had particularly traumatic urine-related experiences at The Game in 2017.

The long string of traumatic events started less than two hours into the Yale trip. It was 7pm, and we were stuck in traffic. It turns out that everyone was looking to get to Yale on the Friday night, and the roads were simply not made for the amount of traffic that only graced the roads of New Haven once every two years. To make matters worse, we were on a tight schedule to get to Toads, having waited for three hours for the bus to turn up. Those three hours had got more and more frantic as we realised that first, we were going to miss the pregame, and second, that we were simply going to hit traffic the later and later it became. Maybe that is why I decided to start drinking so early, literally as the bus was pulling out of Harvard Square, in an attempt to ignore the 23 other stressed out girls trying to do their make-up on a pitch black bus.

You know you’re always going to be in trouble when the bus for a three hour journey doesn’t have a toilet. Now normally my bladder isn’t the weakest of the bunch, but a two beers and half a bottle of wine in and I was starting to feel it. Actually, starting to feel it was an understatement; by this point, it was just outright hurting. The issue was, I didn’t want everyone on the bus to know what I was facing; I was simply just a freshman pushed to the back of the bus whilst everyone else was having a good time. I couldn’t ask to stop the bus, as we were already running so late, and quite honestly I didn’t want to make a scene. My options were limited, and so I just decided to do what I knew was the inevitable. Using my red solo cup that I had just ceremoniously emptied, I crouched down as my friend sitting next to me covered me from the aisle view. The relief was enormous, but the size of the solo cup was not. Frantically scrambling for a second cup to avoid overflow, I learnt that maybe a swaying, braking bus was not the best place for a girl to finesse her aim. Nevertheless, two solo cups down, I felt a whole lot better.

Now, the simple matter of finding somewhere to put the cups. Both filled to the brim, spillage was inevitable with the moving bus. Feeling clever at thinking up a solution, I opened the window I was sat next to, lifting the cup up as I did so. Ignoring the shout of my friend screaming “Don’t waste it!”, thinking I was chucking out alcohol, I readied to throw the cup’s contents out the window. This logic proved that I made the right decision in not concentrating in physics, as turns out that a moving bus’ window is not the best place to chuck liquids out of. Not only did I manage to pour all the contents over my hand, but what little bit made it out the window only made it look like it was raining outside, which caused hysteria on the bus as people realised they hadn’t packed rain gear for the weekend. I just reached for another beer.

If anyone has been to The Game before, or actually any large sporting event, they will understand the struggle of a female who needs to pee. No matter what point of the day, there will always be the biggest line ever imaginable for the women’s bathroom, whilst men will simply saunter in and out of their respective bathroom without a care in the world. Mix alcohol and cold weather, and waiting in that line can drive you to do things you never thought you would.

The first adventure was early in the day; we had started early, and it was only 30 minutes into our time in the Bowl that I decided it was time to ‘break the seal’. As expected, a quick look at the women’s line confirmed that I wouldn’t be peeing in a conventional toilet, and my friend and I soon began to get creative with solutions. Deciding distance would be our biggest helper, we took off in the opposite direction of the tailgates and football field, towards a set of bushes that we could see in the distance. Without realising, it led us up and down hilly slopes that we took at breakneck speed, until we somehow found ourselves at a river. Deciding that this was the perfect secluded spot we were looking for, that became the bathroom we so desperately needed. To be perfectly honest, I don’t remember too much of this first adventure, but simply have video evidence on my phone to prove the distance we ran!

Second time around, we unsurprisingly did not want to make the ten minute run again. This time, emboldened by about two more hours of tailgating, we decided that inequality should be no more. We ran around to the back of the mens bathroom, entered through the exit door, and sprinted as quickly as we could to one of the stalls, heads down, trying to avoid eye contact with anyone standing at the urinals. Quite honestly, this was simply the way to go, and I’ll definitely tell anyone to take this kind of option with me this year at the game.

Whilst no student should ever be out alone at night, New Haven at the time of The Game is a time and a place where this should really be respected, as this one senior shows in her story from 2017.

I was heading back to my hotel room around 2:00am. I had originally dropped my bags in a friend’s hotel room prior going to Toad’s, so I had to go back there first before going to my own hotel. I was waiting in the lobby for my Uber to arrive. Because it was after regular business hours, the hotel doors were locked and you had to buzz/intercom the front desk for someone to let you in.

The Uber said it was 1 minute away/arriving soon, so I walked outside with my bag in hand and stood by the entrance to the hotel/side of the road. The Uber was stopped at a set of lights a couple of blocks away. At this time of the night in New Haven, no one was around. All of a sudden, a van drives past me heading out of town. I checked the app to see if the Uber was almost here because it was so cold and I just wanted to be in bed. Next thing I know, the van is doing a full u-turn about 200m down the street. I was very aware about what was happening and I immediately started to think about where to go if the van came any closer. The next thing I remember is that I’m being chased by 3 people in ski masks down the street. I sprinted as fast as I could to the Popeye’s restaurant down the street, which was relatively busy for this time in the morning. I burst open the door, shaking and yelling. Luckily there was an off-duty police officer there who calmed me down. He asked me all the questions and put out a report for the van to the other officers on duty. After that, he drove me back to my hotel and I was finally safe.

Looking back now, I was lucky to be really aware of my surroundings and urge everyone to be the same when out by themselves. First of all, you should never be out by yourself in New Haven. But secondly, if you do find yourself in that situation, make sure you know where you are, who you are with and have a plan in mind if something like this were to happen to you.

Better Out Than In (Yale)

Nothing quite beats the extraordinary hotel prices that rocket up once every two years in New Haven, so avoid the heavy prices and stay with your fellow Yalie, as this one interviewee experienced.

My freshman year, I decided to do the Harvard-organized housing for The Game to save money. This meant I was left to get paired with a random Yale student through my freshman year dorm, and it turns out I didn’t even have another Harvard student staying with me in this room. As I arrived at Yale kind of late, I never had time to meet the person I was staying with beforehand. I simply found where the room was, dumped my bag, and ran off.

After a pretty eventful night at Toad’s to say the least, I made it back to this Yale student’s room. It turned out that it would just be me and her, and as I got back at 3am, she was just returning from the library. Apparently she had actually been studying for her chemistry midterm in two weeks time, but ignoring this weird fact I decided she was kind of cute, so wanted to keep chatting to her.

As we had been talking for about five minutes, I realised that all I could really think about was how I didn’t feel all that great. Suddenly, I knew there was only one way all this was going. As I got up to try and run to the in-suite bathroom, I just wasn’t quick enough. Spraying vomit all over her rug just outside the bathroom, I can only remember being really, really apologetic, and wondering if somehow Harvard would find a way to get me term-billed for the rug I was continuing to destroy. I don’t remember too much after that, but I do know that I left her room well before she had woken up on Saturday morning. Needless to say, the Yale girl went ahead and followed me on Instagram and Facebook the next day, so it can’t have been all that bad.