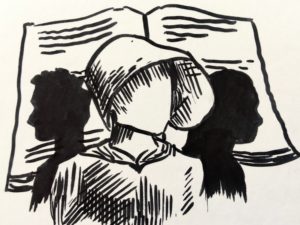 My Mother Serena Joy: Who Tells The Handmaid’s Tale?

I admit it. I was late to the Margaret Atwood party. I didn’t read The Penelopiad until late last year, and I didn’t read The Handmaid’s Tale until after that. I still haven’t read Oryx and Crake. I am the first person to admit that many, many other people have read Atwood before me. Luckily, that doesn’t change the contents of the books at all. The texts remain, not fundamentally tied to their time and place of writing, ready to be picked up anew and reinterpreted by each new generation (or, in my case, to give me a very peculiar feeling of being slightly gross and shameful, as if I should take a hot shower). I have all the time in the world to read Atwood.

This was, pretty much, the extent of my thought on the matter up until I tried to talk about The Handmaid’s Tale with my mother. It was a discussion to which I had been looking forward: she had studied English Literature at Bryn Mawr and Oxford and had impeccable feminist credentials, as well as being, you know, my mom. I had expected her to have interesting ideas that I would not have considered, as well as contextual knowledge that would further illuminate the work. I did not expect, and would never in a lifetime have expected, the anger, the blind, mind-numbing wrath that filled her response.

The Handmaid’s Tale, you see, turned out to be her novel, not mine. She had read it when it was first published, along with all her Bryn Mawr friends. They had dissected its themes, its message, and its style. They had done all this, not I, and yet here I was, some kid who hadn’t even been alive when Atwood was writing her magnum opus, who dared to not only have opinions but suggest they carried enough weight to be worth telling. The Handmaid’s Tale was a solved problem, solved through the unstinting efforts of a heroic group of Twentieth Century literary critics, and now young people were reading it for themselves and coming up with their own thoughts on it? It was the angriest I’d seen my mother in months.

The worst part was that, honestly, she had a point. One could argue that certain stories should be under the control of certain people. As a journalist, part of my job is taking other peoples’ stories and turning them into printable copy, which always carries with it the temptation to twist words or take quotes out of context in pursuit of a snappy line or a touching paragraph; like the rest of the Independent writers, I work very carefully to avoid doing this. Similarly, my mother, who lived through a time when many people would agree it was more difficult to be a woman in the USA than it is now, is “closer to the action” of The Handmaid’s Tale than I am. If not outright control of the narrative, this would seem to grant her the right to some sort of veto power.

It took me a few days to properly process this, between lectures and problem sets. I could point out that modern Shakespearean criticism doesn’t just slavishly copy what his contemporaries thought of him, but Shakespeare was writing centuries ago, and we would automatically at least listen to a time traveler from his era. I could wonder what the point of English Literature was, but “promulgating your elders’ idea of the truth” has been a long and glorious tradition in many academic fields. There didn’t seem to be an easy way out.

In the end, it was literary theory that saved me. (There’s a sentence I never thought I’d write.) Ironically, the ideas I turned to originally came from an essay my mother had recommended, which pointed out that a text cannot be disentangled from the act of reading it. Certainly, there exists a text independent of readers – anyone who reads The Handmaid’s Tale and then writes an essay on what appears to be Paradise Lost would probably fail Modern Canadian Literature 101 – but we cannot analyze a text without reading it. Therefore, we are not analyzing the text itself, because we simply do not and cannot have direct access to that, but the text as read, as filtered through our own minds. If nothing else, I am the expert on how I read The Handmaid’s Tale. No-one else can write for me about my own personal experience with the text, or tell me how it should go.

This does, of course, necessitate asking whether or not my personal experience is worth relating at all. My mother’s experience draws its legitimacy from being similar in some way to that of Atwood’s: she, too, lived in 1980s North America. Mine, on the other hand, is a counterfactual: what if Atwood had written The Handmaid’s Tale in 2019 Massachusetts? What would she have portrayed by writing these words in that context? The answers to questions such as these have a name: “fiction”. We describe how characters in this alternate history would act and think, and from this we draw lessons about how we ourselves should act and think. This is no different to describing and learning from the actions of characters in an alternate reality in which Hamlet was prince of Denmark, or in which Frodo brought the One Ring to Mordor. By critiquing literature from a different time, we are in fact writing literature for ourselves right here and right now, and there is no-one whose opinions on that are more legitimate than ours.

That got very metaphysical very quickly, but the point is simple: although my mother might have more of a claim to her reading of The Handmaid’s Tale than I do, my own reading springs from just as interesting a context as hers. Literature is not meant to be the preserve of a few great minds, situated just at the right time and place to produce canonical ideas. It is an open debate in which a good idea or a world-changing story can come from anybody. Usually, my mother will agree with this, which is what made her Handmaid’s Tale outburst so surprising. I’m still not sure what came over her, but I’m grateful for the opportunity to think so deeply about what literature means to me.

Michael Kielstra ’22 (pmkielstra@college.harvard.edu) has many, many more hot takes on Atwood than anyone could ever need.