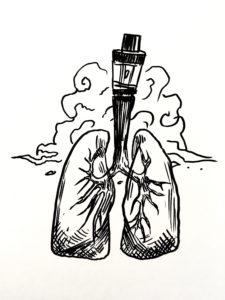 Lost in a Cloud of Smoke: Examining the Vaping Epidemic on College Campuses

They’re mango, watermelon, or mint. Small, like USBs, housing gigabytes of potential. You’ll find them in a pocket, a pencil case, maybe the palm of your hand – anywhere but a smoke shop in Massachusetts.

What’s happening with vapes? In light of the state’s recent ban on nicotine and vaping products, The Independent decided to investigate the threats posed to youths by the wildly popular vaping trend, specifically by JUULS. Given the preponderance of JUULS and vaping on Harvard’s campus, we reached out to Lauren Sandford, a staff writer for ConsumerSafety.org – who is trying to spread awareness about the hazards of vaping – for more information on the subject.

INDY: What are your thoughts about the vaping epidemic?

SANFORD: I personally find the statistics of injuries and deaths linked to vaping pretty shocking. It seems that overnight, e-cigarettes went from a considerably safe alternative to tobacco cigarettes to a human health hazard. According to the Centers for Disease Control and Prevention (CDC), there have been about 1,888 reported cases of lung illnesses associated with vaping in every state except Alaska. There have also been 37 confirmed fatalities in 24 states linked to this mysterious lung disease. The illness has recently been given the name EVALI, which stands for e-cigarette or vaping product use-associated lung injury. Even with this recent discovery, I think more research needs to be done to ascertain what exactly is causing so many e-cig users to suffer.

INDY: What are the hazards of vaping, and how does it compare to cigarette smoking? What are the long term effects?

SANFORD: E-cigarette manufacturers, like JUUL, originally intended for its products to be used by adults who already had a history with smoking and nicotine addiction. However, these same companies have also been accused of explicitly targeting young people with enticing, teen-friendly marketing campaigns.

The Centers for Disease Control and Prevention (CDC) state that e-cigarettes are not safe for kids, teens, and young adults. E-cigs contain high levels of nicotine that can be detrimental to teen brain development. According to Truth, a single pod contains as much nicotine as a pack of 20 cigarettes. E-cigarette vaping liquids can also contain THC, CBD oil, and other chemicals that can potentially harm the lungs when inhaled. Cases of teens who have suffered from seizures, nicotine poisoning, exploding or defective e-cig batteries, and death as a result of vaping have also been reported. For more in-depth information about the potential short- and long-term health effects of vaping for teens, check out the CDC website.

INDY: Has the prevalence of vaping decreased now that it is illegal in Massachusetts?

SANFORD: To my understanding, vaping was declared a public health emergency in Massachusetts in response to the growing number of hospitalizations and fatalities linked to vaping. According to Dr. Monica Bharel, Commissioner of the Massachusetts Department of Public Health (DPH), the e-cigarette ban involves the following:

“The sale or display of all vaping products to consumers in retail establishments, online, and through any other means, including all non-flavored and flavored vaping products, including mint and menthol, including tetrahydrocannabinol (THC) and any other cannabinoid, is prohibited in the Commonwealth.”

The ban won’t necessarily make it illegal for users to vape, but it could make it more difficult for consumers to purchase e-cigarettes and flavored e-liquids.

The Trump Administration, as well as several states, including Michigan, California, New York, and Rhode Island, has also proposed vaping and e-cigarette bans in an effort to curb the teen vaping epidemic. Stores like Kroger, Walgreens, and Walmart stopped selling electronic cigarettes in wake of the growing uncertainty over the health risks linked to vaping. The bans may also prohibit vaping in public spaces.

INDY: Do you have any statistics on the usage of vaping on college campuses?

SANFORD: Though I could not find any concrete data that reveals how many users vape on college campuses, the CDC states that 1 in 5 high school students reportedly vape, and 1 in 20 middle school students have used electronic cigarettes in the past 30 days.

INDY: What is the FDA doing to address the issue?

SANFORD: In the midst of the vaping epidemic, the Food and Drug Administration (FDA) released this report on October 4th, 2019 advising users to stop using certain e-cigarette products, especially those containing Tetrahydrocannabinol (THC), that were obtained off the street. Other warning letters and regulations can be found on the FDA website.

More generally, the FDA is cracking down on e-cigarette manufacturers that are making false claims that its products are safe. In September 2019, the FDA sent a warning letter to JUUL Labs regarding claims the company was making about the safety of its products, and JUUL’s marketing practices that were deliberately targeting a younger audience. These are not the only actions the FDA is taking to address the vaping epidemic; more specific information and cases can be found on its website.

INDY: How can schools better regulate the usage of JUULS, giving that “juuling” is very easy to conceal?

SANFORD: Though I am not qualified to make claims about how schools and universities can better regulate vaping, we have seen that college and university campuses across the nation are enforcing e-cigarette bans. The most recent case I have seen is Texas A&M university enacting a campus-wide vaping ban that applies to students, faculty, and staff.

INDY: What advice do you have for addicted users?

Recently, there have been reports of e-cig users who are turning to traditional cigarettes in an effort to kick their nicotine addiction brought on by vaping. However, the CDC has other recommendations for users who are addicted to vaping, and users who have been harmed by their e-cig devices have the option to sue the manufacturers for compensation for their suffering. There have already been cases of younger plaintiffs who allege that JUUL and other e-cig companies falsely advertised their products to appear “healthier” and “safer” than regular cigarettes, which have led many users to unintentionally develop nicotine addictions. JUUL is expected to receive a wave of consumer lawsuits in the midst of the mounting health claims against its products.

INDY: Lastly, what is your profession/what is your background in regard to e-cigarettes, and how have you gathered this information?

I am a staff writer for ConsumerSafety.org, a consumer advocacy organization dedicated to arming consumers with the information and resources to recover financial losses caused by unsafe products and conditions. One of our goals is to spread awareness about the dangers linked to vaping and to keep consumers informed on these issues. We find most of our information from reputable organizations, like the CDC and the FDA, and stay up-to-date on all e-cigarette news so that we can deliver the most accurate information possible.

The legal and health detriments of e-cigarettes are unmistakable. But whether this knowledge will dissolve the vaping culture is a question of time and commitment; the flavors are enticing, the addiction is ever-present. Fostering a dialogue on the vaping culture is a step in the direction of a safer, healthier youth. We hope to promote this change within our Harvard community.