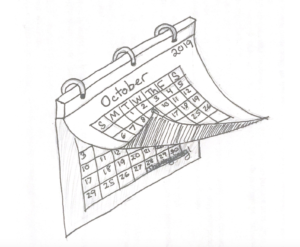 Hollow Days: Some Thoughts on The Holiday Season While Away from Home

It’s November, and coincidentally the beginning of one of my favorite times of the year. There’s just something magical about the time before Thanksgiving, and the idea of planning ahead for seeing family again. The holidays have always held notes of the fantastic for me. The nights leading up to it feel more vibrant, as if some barrier between me and my surroundings is getting thinner. When I was younger I used to get so excited by this experience that I believed that there really was a barrier getting lifted between me and some other dimension. Now it’s less about the fantastic and more about the knowledge that the year is coming to a close. These while I’m at school are going to be some of the last ones where I’m actually going to enjoy being outside instead of shivering and hurrying to get inside because of the cold.

Since coming to college I’ve noticed that the cold, the holidays, and my emotional experiences are all really deeply tied together. One of the most festive times of year that begins with Halloween also marks the beginning of what will be an emotional struggle with being away from my family back home during such a happy time and the stress of exams and final projects here.

For the last two years, my Halloween was spent alone. The days leading up to my first Halloween at Harvard were pretty fun. I decorated the common room with one of my roommates and bought a ton of candy for the room from CVS. I went thrift shopping for a costume with some friends and acquaintances in Central Square, and I consulted with my mom for my siblings’ Halloween costumes back home, helping her to nail down some final details for their facepaint. The first time I did an elaborate makeup look and enjoyed a night in with candy and a horror movie. The second time I worked as a bartender at my place of work with a full face of Halloween makeup and went home to sleep afterward. I didn’t go trick or treating, or throw a Halloween party with my friends and family like I did every year growing up. I didn’t have some grand time that left me wishing it had never ended in the morning. It was just a cute night where I indulged myself in some nostalgic things and then I went to sleep.

This isn’t meant to convey that I had a bad time, or that my last two Halloweens were sad nights. Rather, I mean to point out how adulthood has a habit of being isolating and of minimizing the more “magical” aspects of life. Things that made my heart sing when I was a kid, like Halloween and prancing around in a costume, only make me smile a bit now. I don’t know if it’s because college has sucked some of the life out of me or if it’s because Halloween always makes me homesick, but I simply don’t enjoy the holiday as much as I used to.

The same goes for days like Thanksgiving and Christmas. Thanksgiving break has grown into something stressful since coming to college. Instead of enjoying time with my family, deadlines for projects and final exams always hover in the back of my mind. There hasn’t been a ton of space for being “thankful” when I know I have to go back to school in two days and pick up the pace as we rush toward the end of the semester. Of course, I realize it’s part of being an adult, this “taking your work home with you” phenomenon, but I didn’t realize how much it could ruin a holiday entirely when I went to college.

Winter Break is an entirely other matter. Back home, there isn’t much space for me anymore. It isn’t anyone’s fault, but really just a matter of a big family having to make do with a limited amount of space. When I moved out to go to college, my younger brother moved into my bedroom so that he wouldn’t have to share a room with our baby brother anymore. Now Winter Breaks are spent sleeping in my little sisters’ bedroom or making do with the living room couch. This gets rather stressful after a few weeks. I’ve been left wishing to go back to Harvard where I have my own space, when I should just be enjoying spending time with my family, who I no longer see nearly as often as I’d like to.

That’s on top of how restrictive it can feel to be at home during break compared to the relative freedom of being away at school. Here, if I want to leave at 3am to go to CVS, or stay up all night binge watching Netflix, or go out on a Friday and not return until the next day, no one bats an eye. I can’t do things like that at home, because there aren’t 24-hour pharmacies close by, and I don’t have a car at home to get around with, and my siblings need to sleep because they have school the next day, so I should “seriously go to bed too.” This change to my routine at school is a month long, and has served to seriously damage the way I used to see Winter Break when I was younger.

Now, yes, it’s still something to look forward to as a break from college stress, but there’s also this sense of no longer knowing who I am in my own home, or where I fit in. Thus, Christmas and New Years will probably never be the same for me, because I’m a visitor now when I go home, rather than someone who lives there.

I know I’m not alone in my experiences, especially here at Harvard. I know people who dread the holidays for different reasons entirely. They actually can’t go home, because they live too far away and plane tickets are expensive. Or maybe since coming to college they’ve had insurmountable falling-outs with their families, and they no longer feel safe at home. It’s a different reason for everyone I’ve talked to about it, but the sentiment is the same: the holidays aren’t the same since we’ve had to spend time away from home, and we don’t know what to do to fix it. For my part, I’m hoping that this year will be different, because this year I have a driver’s license and I can leave the house more easily if I want to. This has also been one of my least stressful semesters at Harvard, which I’m hoping has a positive impact on my time at home and the days I will spend decompressing from Finals-induced-stress.

I’m hoping others will read this piece and see that they aren’t alone if they do dread the holidays for whatever reason, and that it helps someone to make changes that might minimize any negative associations they have with this time of year.

Alaya Ayala (alaya_ayala@college.harvard.edu) wishes everyone good luck with the end of the semester and hopes that this holiday season is enjoyable.