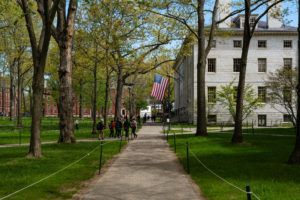 A Dissolute Council: The Movement to End the UC

By MICHAEL KIELSTRA and ARSH DHILLON

On Sunday, October 27th, Nicholas Eynon ’21 sent an email to the Kirkland mailing list, urging students to sign a petition to dissolve the UC. The Dissolve the UC group hopes to get their referendum question on the UC voting ballot, so, as they state, the UC “can #cancel itself lol.” Essentially, the group’s main claim is the UC, with its cringy emails and overly friendly members, is too annoying and pointless to exist. So instead of voting for the UC President, Eynon has asked the members of Kirkland to vote for his petition, which would replace the UC Constitution with a single clause which simply states that the UC as a body is dissolved, and say “Bye Bye UC :).”  Although such petitions are, according to the UC Constitution in its current unmodified form, usually simply advisory and not binding, the passing of this one would represent a serious blow to the legitimacy of the governing body.

The UC is no stranger to existential issues.  It has almost impeached at least one President over issues of campaign finance (passing out buttons made from blanks stolen from the QSA), and in 2019 it voted that the President and Vice President, technically “Executive Officers” and not full “Members”, could neither propose legislation nor vote.  Proponents of this ruling called it “the Great Reform”; the Crimson called it “uncommonly silly”. Furthermore, efforts to dissolve or, at least, severely inconvenience the UC have a long history. In 2011, the Crimson refused to endorse a candidate for the Presidency, encouraging students instead to abstain from voting at all.  While this editorial argued that the UC was simply too powerless to do any good, Eynon’s claim that the UC actually does harm by spewing pointless fluff and wasting time or worse can find plenty of historical confirmation as well. In the late Twentieth Century, the UC passed various resolutions against such things as the behaviour of the Burmese government, having little to no effect on the actual situation in Burma and using up meetings that could have been geared instead towards student services.  In 1992, it led a charge to convince Harvard to ban grapes from dining halls, and succeeded until 1997, when a counter-protest under the slogan “Grapes are tasty” brought them back again. The UC has been around for a very long time, and any such organization is bound to have made a few slip-ups here and there, but at this point the argument could be made that Eynon might be right. After speaking with several Kirkland residents, a similar sentiment seems to abound: “I was amused, to be honest – the UC really doesn’t do anything.” These students also did not fill out the petition itself, indicating a somewhat strange level of apathy regarding both the UC as well as its dissidents.

Be that as it may, the UC is not without its supporters.  In an email to the Kirkland mailing list, Madison Trice ’21, one of Kirkland’s UC representatives, wrote that “The avenues of activism and representation [provided by the UC] are both really important for moving change forward at this school.”  She was forced to make this defence on her own, as the UC leadership has neither issued a statement nor responded to the Independent’s request for comment.  (Carter Nakamoto ’21, Kirkland’s other representative, also seems to be staying out of this.)  Perhaps this is more evidence in favor of the idea that the UC needs shaking up: in a time such as this, a crucial turning point in the history of the body, it falls not to the President, nor the Vice President, but to one of Kirkland’s representatives to defend its very existence.  Trice, incidentally, did not stop there and stated that she’d be happy to speak further if given the opportunity.

There have been no other referendum petitions that would so completely impact the business of the UC, although there is one to simplify the voting system so as to choose all representatives and members simultaneously, another to merge BoardPlus and Crimson Cash, and a third which simply states “Bees?”  (To this we, taking our cue from Nicholas Cage, strongly urge our readers to vote “No”.) Like many public occurrences on campus, the general flurry of petition drives has also found itself providing a forum for Divest Harvard. Last year, they passed a divestment referendum with 72% of the vote; this year, with Harvard’s endowment still invested in fossil fuels, they are trying to do the same thing again. If the UC does survive, this coming term looks to be both busy and controversial.

Satire V, a campus humour organisation, took responsibility for the petition and claimed it was a prank, but the debate it has engendered is symptomatic of a deeper issue regardless of who started it.  Whether the Dissolve the UC has any real widespread support, the matter of a number of Harvard students viewing our student council as pointless and annoying shows that our student government lacks the legitimacy and respect it needs. Maybe getting their referendum on the UC ballot will shake things up enough to force the UC to be more effective in representing the student body. All it takes is a simple majority vote…

Michael Kielstra ’22 (pmkielstra@college.harvard.edu) is, if his desk is anything to go by, an expert in replacing the structures of order with glorious chaos.

Arsh Dhillon ’23 (asekhon@college.harvard.edu), like Michael, seems to enjoy chaotic energy a bit too much.