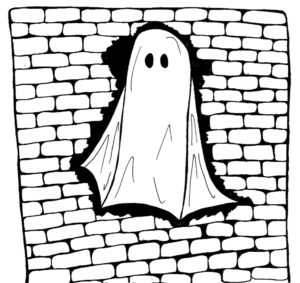 or Just another brink in the Wall

The eye is changed. Horror isn’t in stories and movies anymore, it’s in the walls. But how does one escape the careless whisper of the brick, the plaster, and all those tangled wires?

Escape you say? But escape is impossible when all is made of me.

Well, at least let me tell a few of my stories then, okay?

I wake up every morning, and see it rolling out of that bed. It only stirs when they hit. But they keep swinging off of me. They keep hitting, hitting, these electrical notes. Wave after wave of strident shouts bounce back into its ears. It grunts, it slaps that shiny thing, and away they go, the sounds. I preferred those other wavy rays; sunlight is so good on my fair skin. I almost look creamy white when it shines on me. But it doesn’t notice, it barely even looks at me. It only uses me to reverberate those hooks which fish it out of its dreamy state and off it goes. I’m left alone for the day.

I’m not sure I can feel my face anymore.. What has happened? Wasn’t I supposed to be fresh-faced? I try to return him the best possible image I can. I swear I can do better though. I really don’t want to lose to that mirror from his hometown again. It always gives him such rosy cheeks. I can barely keep up the reds without him noticing those busted veins in his eyes. Hear me friend, I am not just you. But neither is that front camera. In that case, listen to me rather. But in front of me, you always just glance at specifics, seek out their definition. Zits, quads, jawline. You never look at the whole. I will never get you to look inside, so I let you go.

We have her! Eyes glazed, turned to her fate, let’s remind her where she is. Of the Houses, inside the Dining Halls, we are all the same. But we have all died. Nonetheless, we still creep up like vines to shoot our thorns into her heart. No time for sensitivity she hears. There is a position to attain. She can recognize our faces and careers. Our blood seeps through the walls and bucks up her will to go to class. There, she will learn, there she will win. Discard the other, be loud, be true. Transfixed, she will follow in our steps. She will rise to be our equal. Frame to frame, colors fading into eternity.

‘It’s the final lockdown’! It strapped itself down in class among the others. ‘I can start compressing’. Alone together, they listen, but hear not what is to be imparted. They hear only what I give them. ‘The pressure rises’. I am oppressive and multi-faceted, and show them how their world is, under which bunkers they will evolve for their entire lives. ‘I am down near their heads’. To those who look forward, those who never wish to wait, I give the straightaway version. Unadulterated facts. They will be the first to use others. ‘I can narrow down on their faces.’ They will master the truths, they will define the crimes. To those who falter, look left and right, observe the others, I will let uncertainty hit their gaze. ‘I can mold their heads.’ I will make them concerned only with menial matters: their position in life, conformed with others. Left or right, these ones will work. ‘Time for one last squeeze.’ To those who gaze up, I give nothing but symbols. Fleeting impressions of some meaning. Hope of a change in the world. I will prick them first. They would have preferred that I didn’t exist. ‘The framing is done, now the bunkers are inside their heads.’

Their eyes stray from me though. How can I find myself in front of them again? Oh, the walls of their Facebook pages… Here I am again, mimicking the painted victors of Harvard’s legacy. The portraits they display on my walls fix chillingly wide grins. I see myself in the mirror to their souls, RGB pixels and back. Why is it that not once during this day that grin showed itself to me? Yet here it lays nagging, in permanent happiness, on a virtual extension of my enclosure.

I’ve heard them speak. In public, nicely. Intellectually. In private, scared, doubtful, sometimes even resentful. They avowed their insecurities to me and I let them lay bare. They saw no friend in me, but I saw those rolling streams on their rosy cheeks. They spoke to themselves and yelled. Once, they punched me. They went crazy, with ups and downs and no time to rest in between. They never listen. But I still speak back to them.

I tell them their luck. That Fool’s Gold luck. I tell them their constraints, now up in this world. I show them how I am built. Off the backs of those they will never hear the histories of. I will teach them to stand up straight and withstand the crushing weight of the giants which I made upon their shoulders. They will not crumble. They will become me.