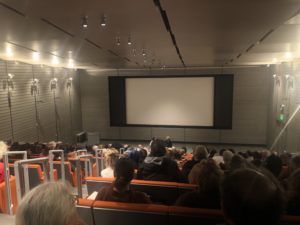 Voices of the Rainforest

Film in anthroacoustemolgy shows at the Harvard Art Museum, documenting the Bosavi people’s inherent connection to the sounds of nature

The screen was unanimated, but the hall was absorbed in the soundscape of a rainforest in Papua New Guinea, home to the Bosavi people. On this evening of October 21, 2019, the Harvard Art Museums’ Menschel Hall became a cathedral for the chorus of insects and birds, bats and frogs during a screening of Voices of the Rainforest: A Day in the Life.

As the soundscape became more layered with pulses and wingbeats, croaks and calls, the image of a dim night gradually emerged upon the screen; in the dark shade of early morning, the landscape was simple—a dark land mass, a few trees, a misty sky, a full moon. This static photograph of a simple landscape, not relenting to videography, was an unexpected first moment of a film, but the decision was stately. The unmoving image, the desensitization to visuals, encouraged the audience instead to focus their attentions to the moving sound.

This distinct method of storytelling persisted as the film continued to comprise of a series of still images, depicting the forest canopy, only showcasing photographs of the organisms whose vocalizations were bellowing throughout the Hall several minutes into the film.

These soundscapes originally premiered, devoid of the cinematography, in 2017. The announcer of the Harvard Art Museum shared that, several years ago, she once asked for the insight of producer Steven Feld in her grapples with defining “cinema verite,” which has been loosely defined as  observational cinema. In this style of film, the filmmaker refuses to intervene in the scene of interest, committing to exclusively being an observer. Feld offered his own nuance to the definition, by evoking the words of Jean Rouch: the camera is what provokes a kind of truth. It is clear that this philosophy is applied to Feld’s undertaking of this film—though the scenes may seem to be generally observational, Feld masterfully uses the camera to capture the Bosavi people’s intricate connections to the elements of the rainforest—such as, in one instance, with water.

Once the film transitions from photography to videography, the audience watches a woman walked through the rainforest, following along the route of the water until she eventually sits atop a rock centered within a stream. The soundscape coupled to these cinematic moments enhanced the motif of water—with its running trills, the music emulated the meandering nature of water.

During these scenes, an image was transparently superimposed upon the screen, a drawing of a river with fish swimming throughout: what director Feld referred to as a song map. Feld had played this water-celebratory melody to children living a few villages away, asking them to draw whatever it had conjured in their imagination. In Western musical culture, it is a common exercise in musical pedagogy to ask students to write, draw, or depict what they are visually perceiving from what they are hearing—for example, a grandiose classical symphony inspiring children to draw a languid scene of nature, perhaps an ocean. Though this serves as an excellent educational exercise, typically these drawings are done without this being the composer’s intended artististry. Exceptionally, in the case of the Bosavi people, the music cannot be disentangled from the nature it lauds. The song map truly depicted the essence of the song, which was sung to celebrate water—the children were able to recreate this without any pre-given information. In putting together his composition, the producer considered not including film and recordings of the water to be a great injustice. And so, Feld proceeded to give a diverse portrayal of water, perspectives from streams to falls to rain—each of which, despite their differences in habitat, chime into the song with unique sound signatures.

Amongst the film’s most powerful of images was when a man was crafting a flute by hand, shaving bamboo along its periphery and cultivating it from a root to an instrument. Overlaying this imagery is a recording of the flute, closely resembling the songs of the birds—seemingly suggesting that the music of the Bosavi people is simply inseparable from the music of the rainforest, having coevolved. The man, however, is wearing a polo imprinted with the Lacoste logo. This is an inescapable juxtaposition between the natural way of life of the Bosavi people to the fabricated and financier-led ways of showcasing elitism through clothing—the Bosavi people are so remote that they are able to escape this pretension. Feld strives to produce a follow-up film to Voices in the Rainforest which further addresses this remoteness, particularly as it collides with tensions regarding logging.

This phenomenon of remoteness is intensified when a woman speaks to the camera at the end of the film—poignant, as this is the first time the spoken word is incorporated. She reflects upon the initial moment when her father had been the first of the Bosavi people to welcome Feld to their community. When the children of the village were frightened by Feld’s presence, Feld removed his shoes. Upon seeing the pink soles of his feet, the children began to laugh, signifying their trust. Feld’s lack of rugged feet confirmed that he was benign; his feet had not traveled elsewhere, and his bare feet grounded him—quite literally—to their rainforest.

The woman goes on to emphasize the importance of music in the tradition of the Bosavi people. It’s limiting to merely define music as a practice—theirs is not constrained by the form of sheet music or by the purpose of performance, exclusively. Music, for the Bosavi, is the message of the birds.

Whether it be for a change in weather or the interruption of a foreigner, birds are the message carriers, the harbingers. The Bosavi people after all feel they are always being watched over by the birds, which is why the film often employs overhead, birds-eye view cinematography—the true “cinema verite.”  Noting this significance, the woman recalls, with gravitas, “Then the missionaries came with the first radio.” And although the radio was similar to the birds in its news delivery, ultimately its battery was used up and the radio died. The Bosavi people crave to be reconnected to general society through the construction of a cell phone tower. Whenever a member of the Bosavi people is ailed with sickness, the community brings the ill person an open runway, in hopes that a plane comes by. Sometimes they don’t. There was not a plane that came by to offer medical help when this woman’s father—the one who initially welcomed Feld into the community—was on the brink of his death.

This film serves as an ode to the diverse voices of the rainforest, how the intricate cadences of the animals balance the elaborate melodies of the Bosavi. By taking us through the day of a Bosavi, the film at its foundation uses temporality as a storytelling tactic. And yet, in the same way that the film uses temporality to capture how the Bosavi’s music has evolved with nature’s daily rhythms, temporality is also what leaves the Bosavi vulnerable. If help is needed, whether it be accessing medical aid or resisting the pressures of logging, the gift of time may be limited. Feld’s forthcoming sequel to this film will serve as a necessary continuation of this conversation.

Marissa Garcia ‘21 (marissagarcia@college.harvard.edu) appreciates the musicality of nature and is passionate about recording the sounds of water in all of the parts of the world where she gets to travel.