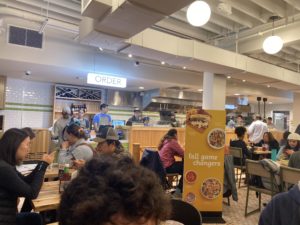 Plant-based provisions such as zucchini noodles, cauli-mashed potatoes, and Beyond Meat are now being served in the new Harvard Square location at a time when plant-based eating is becoming an increasing sustainability priority of the University

During the festivities of Harvard Square’s annual Oktoberfest celebration, Veggie Grill, the plant-based chain headquartered in Santa Monica, officially opened the doors to its 34th location on Sunday, October 13th, marking its first expansion to the East Coast. Other locations presently include Illinois, Washington, Oregon, and mainly, California, with a new location soon opening in New York as well. Despite the franchise’s goals of swiftly opening 10 restaurants in the timeline of the next year, this new opening at 57 JFK Street comes after a prolonged wait of 16 months. At the time the franchise expansion was announced in May 2018, the restaurant had been predicted to be serving its first customers by Fall 2018.

During Veggie Grill’s soft opening on Friday, October 11th, each pre-registered customer was offered a complimentary drink, appetizer (per two people), and entree to be ordered from their full menu. Highlights include the Bulgogi Beef Protein Bowl, the Mediterranean Supergreens salad, the Santa Fe Crispy Chickin’, and Carne Asada tacos. This selection alone is inspired by Korean, Mediterraean, American, and Mexican cuisine, truly underscoring Veggie Grill’s marketing tactic to reinvent plant-based eating as a lifestyle that transcends supposed constraints of cultural culinary tradition. Assumptions that diets from traditionally meat-centric culinary traditions could not be adapted are bygone. Geographical diversity is at the heart of this plant-based fare, simultaneously being attractive to customers from many cultural backgrounds but also advocating for a greater mission: proving by practice that plant-based never translates to restrictive. The promise of a meal at Veggie Grill leaving both the customer “AND our planet feeling better” even manifests itself in the earthtone colors of the drinks, varying from Hibiscus Tea, Black Tea, Matcha Horchata, and Strawberry Lemonade. Customers could elect between dining in or taking their meals to-go, highlighting Veggie Grill’s pick-up option that will assuredly be attractive to the on-the-go lifestyles of students, inevitably bustling between destinations short of time.

Amongst the diners on Friday evening was Antares Tobelem ’21, who confessed, after voraciously consuming her vegan dinner, “My friends and family know how much I love eating meat.” She then proceeded to confess that, after ordering the food at Veggie Grill for the first time, “I could realistically become a vegetarian… it not only tasted incredible, it also felt healthier for my body after I ate it.” Beyond just the appreciability of the food’s health angle—after all, Veggie Grill boasts of using rice bran and seed oils, sources of “good cholesterol”—Tobelem was especially driven by the inseparability of the franchise and its commitment to the environment. In an era where alternative meats are priced 200% above comparable ground beef options ($6 for a half pound of Beyond Meat in comparison to $3 for a half pound of ground beef), any concerns Tobelem may have harbored about Veggie Grill’s  presumably high cost—considering the menu’s reliance upon Beyond Meat—were quickly dispelled: she discovered that the price of every meal at Veggie Grill was impressively comparable to any other fast-service food option in Harvard Square, ranging from $7.95 to $13.50.

Tobelem represents the demographic in the market that Veggie Grill is striving to target, what CEO Steeve Heeley would describe as a customer who is “veggie-positive.” In its coverage of Veggie Grill, Forbes brought to light a 2018 Gallup poll that documented that only 5% of Americans identify as vegetarian and 3% as vegan. During an interview with Forbes about the persistent expansion of Veggie Grill despite these strikingly low plant-based demographics, CEO Steve Heeley insisted that “vegans and vegetarians…are about 20% of our business. The other 80% is what we call people who are veggie-positive.” So, it’s only tactical that Veggie Grill would be marketing toward those who are veggie-positive in order to be a successful plant-based franchise.

This marketing strategy elucidates upon the staples of Veggie Grill’s menu offerings. Instead of focusing on whole food natural proteins, such as beans, chickpeas, and seitan—which are endemic to standard plant-based menus—they expand into industry-born imitation meats, such as Gardein Chickin’ and Beyond Burger. The Beyond Burger, a plant-based burger deriving its protein from peas and its meat-like color from beets, is the menu item most likely to entice meat eaters to venture to plant-based eating—a dietary lifestyle once presumptively bland, now on the brink of exotic. According to executive chairman of Beyond Burger Seth Goldman and as quoted in Food Navigator USA, “70% of purchasers of the plant-based Beyond Burger are flexitarians—meat eaters that are cutting down on meat.” This trend is aligned with the Harvard University Dining Services’ addition of the Beyond Burger to the Grille menu offerings in Fall 2018. As of Fall 2019, the Beyond Burger is cited as more frequently ordered than the traditional veggie burger at the Grille.

After Tobelem insisted she intends on bringing all of her friends to Veggie Grill, she exclaimed, “ I’ve already gone [to Veggie Grill] twice since it opened 3 days ago! I wish they would implement it more into the dining halls!” The sentiment parallels the intention behind Veggie Grill’s recent partnership with Sodexo, a firm that provides food services to over 700 universities—including the likes of UCLA, UC Berkeley, and the University of Washington. At these colleges Sodexo will incorporate items from the Veggie Grill menu, a considerable boon for the restaurant considering how approximately 20% of college students in particular identify as flexitarian, vegetarian, or vegan, according to Techonomics. This partnership is in tandem with the findings of a 2018 Gallup Poll, which affirmed that vegetarian diets are significantly more prevalent amongst younger age demographics, with 7.5% of those ages 18 to 49 identifying as vegetarian in comparison to the 2.5% who are ages 50 and older.

It has remained a deepening priority of the University to instill in its students a value for sustainable eating, and its recent actions indicate that Harvard’s striving to lead by example. In September 2019, Harvard signed the Cool Food Pledge, committing to a collective goal amongst the other pledgers to reduce their greenhouse gas emissions attributed to dining services by 25% by 2030. Joining the ranks of plant-forward Clover and Whole Heart Provisions, the opening of Veggie Grill could not be more timely.

Marissa Garcia ‘21 (marissagarcia@college.harvard.edu) covers plant-based eating at and near Harvard for the Indy.