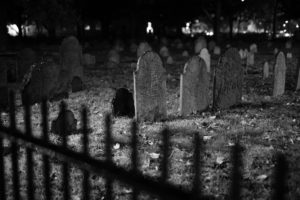 When people asked why Johnathan slept in a graveyard, he felt uncomfortably unconvincing replying that he didn’t know it was a graveyard at all. Johnathan was Johnathan; not Jon, or John, or Jonathan, but J-o-h-nathan. When his kindergarten teachers corrected his spelling, he corrected them right back, politely if he thought he could convince them, and waited until some other fire (metaphorical or, after at least one ill-advised demonstration by a father who thought he was a survivalist, literal) pulled their gaze away to quietly scratch a thin h’ where he knew it belonged. He was not impolite, or confrontational, or even particularly disliked, but he was particular.

But Johnathan slept in a graveyard at 6pm on a Saturday that happened to be Halloween, and the Woodlands Memorial “Old” Cemetery was covered knee-deep in weeds and softly clumped sod. The Old Cemetery was thirteen years defunded and eight years forgotten when the last parishioner of the nearby church was buried there. She had outlived two husbands and three pastors, and was buried, according to her will, by six pallbearers (two sons, one niece, three hired) in a narrow plot facing the sunset beneath the oak tree that Johnathan, six years and three months later, sat against.

Johnathan, in protest of the commercialized holiday known as Halloween (which he knew to be more accurately called “All Hallow’s Eve”), had walked off from his group of friends an hour ago. He knew he was lost, somewhere less than three miles away from his school and somewhere more than five miles away from his house, but that was knowledge rarely helpful and here — in a shapeless little overgrown glen dotted with rolling knolls and surrounded by wispy trees that let in sunlight but precious little in the way of navigable landmarks — even less so. He relaxed, resigned and almost relieved in his lost-ness, one leg outstretched and the other withdrawn, freshly-bloodied knee pressed to a thin beige shirt and thinner chest.

To him and his tight-knit (more by necessity and lack of any other options in their small-town school district than any real connection) cohort, the Old Cemetery was something of a myth, a topic for muttered stories and “I-heard-that-someone-said,” not an Actual Place that Real People visited, much less an idyllic clearing dappled with the fading rays of summer sunlight. It was not until he awoke, two hours later, to the purple blue-gray of dusk that it dawned upon him that getting lost in a lazy afternoon and stumbling around overnight were two altogether different things. His hand brushed a cold stone slab almost swallowed by the old oak’s roots. He inspected it in the light of the full moon and realized, with the certainty of the very scared, that it was a headstone.

He stumbled to his feet with a crick in his neck and a sore ankle, uncomfortably aware that his ability to navigate by the stars (which he had bragged about in some depth to a girl who, in the honesty of hindsight, was really not very interested) was limited to the knowledge that there was at least one bright star that pointed North. He squinted, and through the application of his considerable experience was able to identify six bright stars pointing in four different directions.

Johnathan was by this point in a panic.

“Shit,” he said, which would surprise his friends (who thought he didn’t panic) and his parents (who thought he didn’t swear). He jittered nervously on his good foot, one hand pressed to the sturdy oak tree, and the other clenching and unclenching in the air. Johnathan, who had until now considered himself a put-together, competent man for most of fourteen years (he was willing to concede a few in the beginning), took a deep breath remembered something from the self-proclaimed survivalist father’s presentation, so long ago: “when lost, travel quickly, confidently, and in a straight line until you find signs of civilization.”

This statement was, among other things: an answer to an unasked question, intended for landscapes more hostile that the suburban Midwest, and wrong.

But Johnathan was always one to trust more experienced, wiser heads, even when the wiser head in question was at the time oblivious to the seven-year-old in the front row who had snatched the stormproof matches from the demonstration table and was attempting with determination to strike them on his friend’s braces. So he took that advice to heart and sprinted into the unknown, legs pumping as fast as he had ever run for the Green Valley Middle School Track Team (Junior Varsity, starter, 800m). Unfortunately for him, the unknown consisted mostly of two policemen, one in his fifties, the other in his early twenties.

Of course, to fourteen-year old Johnathan, they were two looming figures freshly risen from the haunted cemetery where he had slept on Halloween night and thus lost his soul. An iron-hard grip snapped out from the older officer, who had spotted him, and a surprisingly high-pitched scream from the younger officer, who had not.

To Johnathan’s credit, it only took a few seconds of primal terror for him, who really was almost as smart as he thought he was, to realize that he was not in fact being grabbed by devils sprung from Satan’s embrace. In those seconds he flailed out of the older cop’s grasp, attempted to bite the younger man he thought was charging towards him (by this point the inexperienced policeman, his third day on the force, was sixteen feet away and accelerating rapidly), and overbalanced into empty air, followed quickly by very not-empty ground.

“Hey, kid, we’re just here to get you home safe,” said Randall (the older policeman), hands held out non-threateningly. He glanced at Colin (the younger policeman), who was walking sheepishly towards them, and thought better of saying anything to undermine the authority of The Law.

Johnathan, whose breathing had slowed down to hyperventilating, stood up slowly.

“Don’t, uh, worry,” said Colin, who was trying to redeem himself. “Our squad car is just back there, a few miles.”

He pointed vaguely away from them. Randall glared at him with an expression that Johnathan was pretty sure did not count as redemption, unless it was the biblical, bloody kind.

Colin shook his head. At last, he was on firmer ground. “No, we were curving left the whole time we went through that weird field thing. We should be north of where we started by now.”

Both policemen, up until now convinced that all they had to do was find the missing child, realized at the same time the flaw in their single-minded plan.