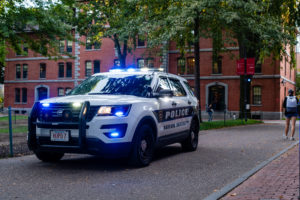 In a country with universities famous for endless debate and controversy, one group stands out. They hear students refer to them every day by a name unliked, and yet they pursue politeness and community integration with a passion. The group referred to, unsurprisingly, is the Harvard University Police Department.

It is a fact well-known to tutors and administrators, but surprisingly unfamiliar to students, that HUPD officers would prefer that you pronounce it “H-U-P-D”, spelling out the acronym. “The HUPD” is even better, reflecting the fact that they are the Harvard University Police Department and not simply a Harvard University Police Department.  “Hup-dee” is frowned upon. In the grand scheme of battles to pick, however, the HUPD officers and staff have clearly decided to let this one go.

It is easy to assume that, given how familiar HUPD is to Harvard students, that colleges across the world have equivalents, but in fact campus police are a uniquely North American phenomenon. The International Association of Campus Law Enforcement Administrators (IACLEA) counts members from eleven countries, but their office and the universities represented by each of their Presidents are all in the USA or Canada, and their website discusses laws varying “from state to state” rather than “from country to country”.  As well as being localized, the phenomenon is very recent: IACLEA dates the history of private security on campus back to Yale in the late 1800s, but claims that most states did not recognize private policing, as opposed to simple private security, until the 1980s or later. Massachusetts state laws regarding the issue only came into their current form in 1991, as part of a general reorganization of state and local police.

Since then, HUPD has become an enduring institution on campus in every sense of the word.  Until 2016, the Crimson would publish bimonthly rundowns of the most exciting events in the public HUPD crime log, annotated with sassy comments.  In 2017, Satire V, a fake-news student comedy group, published its own take on the crime log, containing events such as “Officers dispatched to pizza party, just for a quick snack.  Pizza was mediocre. Officers displeased.” HUPD officers investigate crimes, register technology and bicycles, provide protection for visiting celebrities, and generally perform policing functions on campus.  Everyone has seen them, even before arriving in Cambridge: a video message starring three officers is included in the online pre-Harvard training for first-year students.

HUPD has also integrated itself within the wider policing community.  Cambridge Police Superintendent Jack Albert had nothing but good things to say about what he described as “such a close relationship,” founded on in-service cooperation and forty hours a year of training together.  He told the Independent that it was not uncommon for HUPD and CPD officers to make career moves into each others’ departments; historically, this had been motivated by the CPD’s better pay and benefits, but today the two forces are similar enough in that regard that it’s more usual for CPD officers to move to HUPD in order to collect a government pension while still earning a salary.  This encourages strong ties and general collaboration between the departments.

In September of this year, the collaboration bore fruit during a protest at Amazon’s Kendall Square office.  The Boston Police Department informed CPD that a protest march was about to enter Cambridge, and CPD, who did not have enough manpower nearby to respond quickly, asked for help from HUPD and the MIT Police Department.  None of these three departments were aware at the time that Harvard students were among those demonstrating. CPD made some peaceful choreographed arrests at the request of the protest organizers, and everyone went home.  Among the student body, HUPD’s actions were controversial – the Crimson published a staff editorial entitled “What HUPD Should Stand For”, discussing the “obligation to respect protesters’ free expression” – but to Superintendent Albert they were simply mutual aid rendered from one force to another.  This builds trust within CPD, making it easier for HUPD to operate independently in what is technically a shared jurisdiction: Superintendent Albert said that he and his officers “tend not to go onto the campus unless we’re requested by [HUPD]”, a philosophy that would be unethical did CPD not believe in HUPD’s professionalism.

HUPD has not managed to completely dodge controversy closer to home.  In February of this year, the Crimson reported on the debate over their enforcement of rules preventing people from staying overnight in the Smith Center.  The newly refurbished building had become somewhat popular with Cambridge’s homeless population, to the point where officers were being called almost every day.  At the time, Catalano pointed out that sleeping in itself was not grounds for removal from the building; the officers were there in case, as did sometimes occur, the person in question acted in such a way as to require being removed once he or she woke up.

However, when opining on this, the Crimson editorial board did not claim that it was HUPD who had done wrong, but rather the university administration as a whole.  This mirrors the most common concern about HUPD in general: a few of the students whom I spoke with were concerned that, if push came to shove, HUPD would privilege the interests of the university as a whole, and of the university administration over those of the students.  One felt that HUPD existed “to give more discreteness to the happenings of the college, especially for external optics.” Lorae Stojanovic ’22 said she believed that this was not so much an issue with the police force as the college in general, and that “Harvard’s always one step behind student change,” although she did not claim that this was always a bad thing, given that the college needed alumni to donate for its survival and that students and alumni tended to disagree on hot-button issues.

This might imply a worldview that sees HUPD as a classic instance of a larger institution using force to keep its junior members in line.  However, the truth appears far more subtle. One of the most common responses, when I asked students what purpose HUPD served on campus, was some variant of Jake Kurlander ’22’s opinion that “Harvard police will be a lot more forgiving than Cambridge police for things like teen drinking [or] drug use, and Harvard doesn’t want arrests.”  In this case, the interests of the administration and those of the students come together very well: by maintaining its own police force, Harvard can be more gentle and caring with students while also avoiding the news spectacle that would be generated by a CPD officer arresting a party’s worth of Harvard students for underage drinking.

One other major controversy in which HUPD has recently been involved gives more evidence for this theory.  In April 2018, CPD arrested a black Harvard student, who was naked and, officers believed, under the influence of drugs, on a street corner just out of HUPD jurisdiction.  Normally, HUPD officers would have helped to deal with the situation, but, due to a disastrous Yardfest (during which, at one point, every single ambulance in the city of Cambridge was at Harvard Yard), they were overstretched and could not attend.  The ensuing debate, which, due to allegations of brutality, lasted until November, led to various policy changes, but notably did not focus significantly on HUPD itself. Indeed, the Crimson reported that “In the wake of the incident, some undergraduates said they wished Harvard police had handled the situation from the start.”

Throughout these three incidents, the way HUPD operates is clear to see. They are a professional police force and will not hesitate to make arrests, use force, or participate in cooperative policing actions, but they understand the importance of showing some amount of leniency rather than immediately going for Tasers and handcuffs.  In doing so, they protect the college, which wants to keep minor student misbehavior out of the news, and the students, who are given opportunities to truly reform themselves and grow. Their focus is on protecting the college as an institution and as a group of people, not on reducing crime in this particular area of Cambridge. As Superintendent Albert said, commenting on HUPD and also the various other campus police departments throughout the city, “They see their community as… different from the community in Cambridge. They see the students very differently… That becomes their primary responsibility.”

Coming as I do from a country without campus police of any sort, I was initially surprised by their presence on campus and honestly did expect many students to mistrust them in some way.  However, the vast majority of students I surveyed said that they felt safer around HUPD officers and that they would feel comfortable approaching an unknown HUPD officer for help. One student went to great effort to speak anonymously only to claim that “Having talked with many of them [HUPD officers], they are here to help us, and specifically keep [us] out of trouble, rather than get us into it.”  In a university where seemingly every policy brings about some protest or another, where the Crimson can publish multiple op-eds on hot breakfasts in upperclassman housing, the relationship between Harvard’s youth and HUPD’s finest continue to grow.

Michael Kielstra ’22 (pmkielstra@college.harvard.edu) generally doesn’t like the Police.  It’s not that he’s a criminal or anything; he just doesn’t think Sting is that great a songwriter.