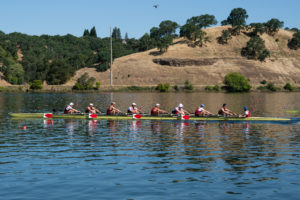 A Look Into Harvard’s Sports Traditions

The first recorded instance of athletic competition at Harvard was in 1780 when a wrestling match occurred between a group of freshmen and sophomores at the college. While being the first recorded instance of a sporting event at Harvard, the first official club began in the Fall of 1844 when the Harvard University Boating Club (HUBC) was arranged by Horace Cunningham. Following, men’s lightweight crew was introduced in the spring of 1921, followed by Radcliffe Crew in the fall of 1970.

Interestingly, the Harvard-Yale rivalry is commonly attributed to “The Game,” an annual football game played between the two Ivy League schools. However, the reality is that the classic rivalry first began in the Summer of 1852, when the first official Harvard-Yale regatta took place on Lake Winnipesaukee, New Hampshire. In the 154 years the teams have dueled over the 4-mile course, Harvard has emerged victorious on 95 occasions, Yale with 58, and one race with no official winner due to a sunken boat. The race now takes place on the Thames River of New London, Connecticut.

On other waters, though not the longest standing race, the Head of The Charles Race (HOCR) is considered one of the landmarks of Havard Athletics traditions. With guidance from a sculling instructor at Harvard, Founders of the Cambridge Boat Club set in motion the first meeting on the Charles in 1965. While the event has not seen as many iterations as others, HOCR is a beloved event amongst students as it is one of the few annual sporting events that takes place on campus. It’s just a bonus that you do not have to cross the river to the athletics facilities to spectate.

For the teams themselves, the historical significance is not lost despite the race falling outside the usual competition calendar. Men’s Varsity Lightweight Crew Captain Nicholas Barry ‘20 notes that this is “the one opportunity to engage with Harvard students” during racing season, an opportunity to “do the home course proud”. Barry hopes that this will be the year their boat can take the top prize in the home race, the first time for him during his HVL career. Harvard has come away with its fair share of gold in past years, indicative of the longstanding morale of the Harvard crew teams. Barry ‘20 reflected on his experiences meeting with alumni of the team, noting that despite years past and turnover of team membership “the sport still hasn’t changed and the passion certainly hasn’t” and that “Harvard makes it apparent that its traditions are enduring” even as the sport evolves over time.

Known amongst students and affiliates alike as “The Game” or simply “Harvard-Yale,” is the annual football game between the two rivals that takes place each November. Taking place for the first time the year following the formation of the team in 1874, The Game dates back nearly as far as the Harvard-Yale Regatta. Harvard managed to shut Yale out on their first meeting at Hamilton Park, New Haven. Since then, Yale leads the series 67-60 with 8 ties over the course of the past 143 years and 135 games. Historic Harvard stadium opened in 1903, the first football stadium in America and the oldest standing today. The current team still practices and competes in the stadium, although The Game was held for the first time at Fenway Park this past fall.

Coach Tim Murphy, the head of Harvard football, joined the team in December of 1993. Having seen the team membership turn over a great length of time, Murphy remarks that “In [his] quarter century plus tenure at Harvard, predictably much has changed but the ideal student-athlete has not.” Holding true to the tradition of what Murphy calls “grit” amongst the team, team players both then and today “have tremendous commitment on both sides of the river” and “tremendous character, academic prowess and athletic ability… kids with great resiliency skills”. While “much has changed in the Ivy League and thus at Harvard” during his time as head coach, Murphy notes that there “has been a tremendous investment in the sport of Football on many Ivy League campuses” over the years “because it is the primary community building sport and has the most tradition”. Murphy clearly knows how to field and develop a great team, with Harvard winning 18 of the 25 Harvard-Yale games over his time at Harvard.

With origins in the late 17th century, the Harvard Women’s Basketball team is one of the few women’s teams on campus that predates its male counterpart.  The women’s team was established in the fall of 1898 and was followed in 1900 by the men’s team. Building on a longstanding tradition of teamwork and sportsmanship, Coach Kathy Delany-Smith is entering her 37th year as head coach of the women’s program. Joining the team in 1982, Coach Delaney-Smith has seen the team through wins and losses, but most notably has led the team to victory in the first round of the NCAA tournament, a first for the team and a rarity for the Ivy League as a whole.

Most notably, the Harvard women were the first team in the NCAA tournament history to upset the number 1st seeded team as a 16th seed team. The 1998 win against Stanford was unprecedented, and yet to be matched in NCAA women’s basketball since. Coming an astounding 20 years later in the 2018 season, the same feat was accomplished on the men’s side with a win from the 16th seeded team University of Maryland, Baltimore Country against top seed University of Virginia.

Continuing to uphold tradition is this year’s senior captain, Mackenzie Barta ‘20. Referencing the importance of tradition on the team, Barta ‘20 remarked that “Being able to put on that jersey and rep “Harvard” day in and day out is one of the greatest honors that I think I will ever have in [her] life”. She detailed that leading a team and playing a sport that is “rooted so deeply in history in both athletics and academics is truly an unexplainable feeling”.

Not falling short of the standard held by Harvard Athletics on every aspect of the student athlete, Barta ‘20 describes her teammates as “being wholeheartedly committed to our team, our sisterhood, and our family… when one of our teammates falls, we’re the first to be there to pick her up. It means so much more than just the drive to win the Ivy League title; for us, it is all about being devoted to each other.” A clear leader, Barta sees the ideal Harvard athletes as someone who “represents the University with honor and pride on both sides of the river and holds themselves to the highest of standards in the classroom, on the field/court, and in the community,” qualities apparent on the Women’s basketball team.

Historical roots are a key component of Harvard Athletics, but this does not hinder new programs from forming and flourishing in recent years. The Women’s Rugby team was formed as a club sport in the year of 1982, but just recently became formally recognized in the early fall of 2013 as Harvard’s 42nd Varsity team. Regardless of their later beginnings, the team fields a strong team in both their fall and spring seasons, continuing the expectation of excellence.

As the first college established in the USA, Harvard is held to the standards of years past. Living up to tradition, Harvard continues to excel in both athletics and academics. Both coaches and athletes alike recognize and respect the value of the experiences and expectations left for them by those who came before, and continue to thrive as an NCAA Division 1 School. While school culture and classes change, the heart of Harvard Athletics and its athletes has remained stable. Commitment, sportsmanship, and community hold strong.