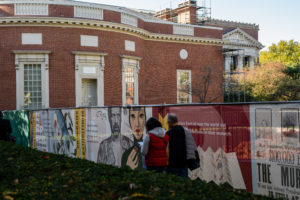 Discussing the Harvard Library System with Students at Harvard College

Surrounded by Henry Moore, cherry blossoms, and Lamont Cafe, Houghton Library is one example of where Harvard can improve the accessibility of resources to its students and visitors. Houghton library, or the primary repository for Harvard’s rare books, offers an abundance of interesting and historically important documents underutilized by the Harvard population. Part of the reason for this is that the space feels empty and inaccessible. For a building decorated with a pretty courtyard and excellent location, donors and University staff are interested in investing in the library to allow the Harvard community to better use the prime real estate.

Outside of incentive programs, Houghton is increasing its accessibility by modernizing its own facilities to serve several purposes. In particular, the library is seen by the student population as more of a museum than a library. For many students, the only time spent within the library is with class trips that Lauren Church ’21 describes as “more like a field trip location than a study location.” Few undergraduates would choose the reading room in Houghton for a casual Tuesday afternoon grind-session, so the optimization is something that Houghton needs.

Harvard Library system has begun an incentive programs to see the 22 Harvard Libraries on campus see increased attendance and recognition on campus. The unique experience in Houghton library in particular is intellectually stimulating and eye-opening for students without prior exposure to historical collections. Unfortunately, attendance is low for both students and visitors. For students, there are a number of new ways by which Houghton is reinventing itself. First and foremost, Houghton is improving its physical accessibility with its overall aesthetic. With a computerized image on the Houghton library website, the plan is to take away the shrubs that seemingly barricade the main entrance. The renovations would create a plaza met by gradual inclines. The combination eases pedestrian mobility in front of the building and requires much less effort on the part of persons with disabilities to enter. Further, an inviting source of natural light will flood the library lobby that will feature works from around the museum.

In terms of accessibility, Houghton has been neglected by Harvard. The current renovations not only alleviate antediluvian methods of accommodating persons with disabilities, but make available teaching facilities and a more welcoming environment with larger galleries and better physical access to its spaces and holdings. Overall, the space is more conducive to the Harvard community and represents a larger vision for the libraries at Harvard.

Donors and faculty alike recognize the importance of the humanities and how this museum is tangible evidence. The push of money into the libraries demonstrates the supportive nature of the arts, something that is rare in society today. Harvard is unique in that we can take philanthropists such as Peter and Susan Solomon to work with Librarians to create an atmosphere advanced enough to offer off historical works to all of Harvard.

The renovation efforts of Houghton library pose an interesting question for students not just at Harvard but around the country as well: for students, what is the role of the library on campus? While some spaces, such as Houghton library, have almost taken a museum-like culture, others, such as Lamont, serve almost entirely as a workspace. As such, as libraries on campus branch into culture centers and work-stations, the questions regarding the purpose of libraries on campus and where, if at all, the traditional library concept fits in.

To investigate this, the Indy spoke with several students about their current perspective on the general library system, as well as in what direction Harvard administration should take its library system.

Indy: How do you currently use the various Harvard libraries: Houghton, Lamont, Cabot, etc.? Do you use any of them in the same way you may have used a public library growing up?

A: I think I’m one of the few people that really prefers Lamont. I usually end up working on the first floor because it’s so quiet and I actually do like being surrounded by books. Once in awhile I’ll pull one out in the nook around me and read it as a break, but I think I’m pretty alone in that. Most people I see use it as a space to work alone or do group work in the cafeteria and basement. I’ve never actually gone to Houghton and Cabot feels like a smaller equivalent of Smith Campus Center. So no- I have never gone to a library here purely for the sake of checking out a book for personal reading.

Indy: What does the ideal library look like for you?

A: Honestly, I love the purpose Lamont serves right now, but the culture and toxicity that pervades Lamont is frustrating. It feels like a truly academic setting, and I think as a Junior, I can appreciate that much more. When first starting out at Harvard, just like every other freshman, I spent a lot of desperate late nights in Lamont. Now, working amidst the books with the cafe just nearby, computers on every floor, it’s just the right mix.

Indy: Houghton library clearly has much to offer to both students on campus and scholars around the world, and with the accessibility renovations and teaching spaces, it should likely attract more folks. What would an updated Houghton library mean for you in particular?

A: I still struggle in figuring out whether there really is a place for me there. I know its a sanctuary of sorts for professors and grad students, but I honestly still feel a little intimidated about just walking in there. Until they popularize and really advertise that students are welcome there to explore and work, I’m still waiting to see how I as a student fit into the renovated space.

Understanding the role of libraries on Harvard’s campus is a challenging one, made further complicated by the introduction of the Smith Campus Center. With so many students using Cabot and Lamont so heavily as work spaces, the Smith Center may perhaps have eased the current burden. Instead, however, Lamont remains as popular as ever, indicating that there is something in particular about Lamont, and libraries in general. As mentioned in the responses, however, Houghton has a particularly special, if not somewhat intimidating, place among students. Whereas Lamont has turned primarily into a workplace, Houghton still holds its center in its rare collection, and as renovations increase access to the space, perhaps Houghton will further carve out its unique place on campus.