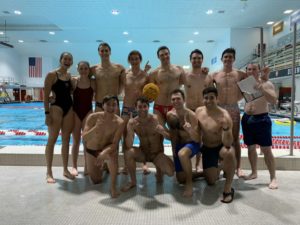 Quincy House clinched their eighth consecutive win in the intramural, innertube water polo competition this past Saturday. After six hours of intense competition in Blodgett pool, the team emerged victorious after a 5-0 win against Winthrop House in the final.

The team climbed the ranks to the final with ease, going undefeated against Elliot, Mather, and Pfoho before beating out Winthrop. For Winthrop, however, the path to the final was not nearly as easy. In their semifinal against Kirkland house, the game went into overtime and Winthrop won by a narrow margin of just one goal.

Participants of the tournament on Saturday varied in age, size, gender, sports team, and nationality, and yet all showed a concerted effort in each game, flapping their arms wildly in backwards motions to propel themselves through the water, and diving heroically for the ball, all the while trying to not fall from their respective innertubes. It was truly a spectacle to behold and all that was missing was… a set of beholders themselves. Disappointingly, only a few spectators came out to witness the intense competition.

Three of the rowers on Quincy’s team, juniors Lucas Clarke, Ethan Seder, and Sam Monkley, were kind enough to pause their post-game celebration and reflect on their journey to victory with the Independent.

“We had a really good goalie, who was really committed to staying back, and our defenders were committed to their positions as well. It was a great team effort,” said Ethan Seder.

“The boys, and girls, really brought it today. It was a game of two halves,” said Lucas Clarke.

With regards to their strategy, Sam Monkely reported that, “Scoring goals was our big plan. We thought that if we scored more goals than they would, we would win, so it went all right for us.” After a moment of further reflection, Sam further credited the athletic prowess of the quincy team, pointing to the amount of varsity athletes on the Quincy team’s roster.

They credit their win to Deb Gehrke, their house dean, who offered to buy the Quincy team pizza in the event of a victory. “We would like to thank Deb,” said Lucas, “The pizza was really a big motivator.” Sam and Ethan agreed enthusiastically, adding that before the game, Deb texted them one word: “dynasty.”

When asked about their strategy for the following year, Ethan said, “Next time, we definitely need team uniforms. That would really help with morale.”

From a spectator’s perspective, it was clear that key to Quincy’s victory was the sheer height of the team members. The towering group of rowers and swimmers had an obvious advantage in stature over all other teams. From their perches in their innertubes, they were able to hoist themselves far enough out of the water to lob the ball over the unsuspecting heads of their adversaries. Furthermore, the majority of the players on the Quincy team had prior experience with either swimming or water polo, in addition to being already fit from training for their respective sports teams at Harvard. Their experience with the sport, coupled with their mere athleticism, made for an easy victory.

The boys, and two girls, were on.