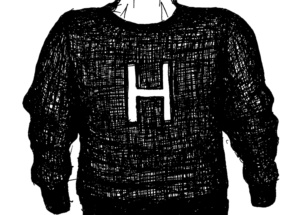 Fashion Through the Ages

By Grace Tworek and Marissa Garcia

Many fashion magazines emblazon “latest trends” atop collages featuring vibrant and bold new styles– this phrase, however, is misleading. Instead of fresh and innovative, these styles are often recycled adaptations of trends reminiscent of the 80s and 90s. To anyone in tune with current fashion fads, it becomes a question of whether fashion is truly ever revitalized, fresh from the posh palettes of decades past. At an Ivy League college such as Harvard, where fashion has been reduced to a preconceived postcard preppiness, these questions are even more resonant. At the benchmark of the 50th Anniversary of the Harvard Independent, Harvard alumni offer their reflections on the evolution of fashion at Harvard.

The word “Harvard” itself conjures up stereotypes of historical buildings, ivy-covered brick, and the preppy lifestyle of “the average Harvard student,” eliciting snapshots of pastel polos, khaki shirts, boat shoes, and the classic Hillflint “H” sweater. Though this image is representative of certain points of time, it constrains a student body that is wildly diverse to preconceived fallacies of how a Harvard student should dress themselves.

In order to better understand the evolution of Harvard’s clothing style, the Indy reached out to Robert Gould ‘67 and asked his impression of Harvard’s fashion when he was an undergraduate. Since his graduation from the College, Gould has worked on Wall Street and, more recently, explored a career in the apparel industry. Gould is the CEO and founder of QIVUIT & CO., a luxury outerwear brand that uses a unique fiber softer than cashmere and warmer than wool. Reflecting upon on-campus fashion when he was a student in the 60s, Gould recalls, “It was generally very preppy and more formal than today. Coats and ties to classes were common.” This description harmoniously coincides with the old-school impressions generally associated with the classic Harvard student. Expectations of contemporary collegiate style at Harvard are more accurately aligned with student’s fashion fifty years ago than today– perhaps the stereotype was conceived then but outlived its wearability. This timelessness of the prep, immortalized in the catalogs of J Press and Brooks Brothers, even saw about the 2018 closure of its Harvard Square lifeblood: the Andover Shop.

The 90s are when this change in fashion precipitates. Starting his studies at Harvard in the fall of 1994, Louis Monoyudis ‘98 offered insight to what fashion meant to him and his peers during the 90s. Monoyudis describes Harvard as, “not particularly known as a fashionable campus, but from time to time there would be interesting fashion shows or art projects.” Eleganza, a premier fashion show at Harvard in April, was founded in 1996, stemming from the cultural production organization, Black C.A.S.T.– halfway through Monoyudis’ undergraduate studies. In a departure from the stifling suite of tartan Oxfords and gingham ties, Eleganza instead celebrates the diversity of the many identifies that comprise Harvard’s fabric– both in fashion and demographics. Monyudis always took a liking toward fashion, and so after graduating from Harvard, he went on to study at Parsons School of Design. He has since worked for brands such as Calvin Klein, John Varvartos, and Tommy Hilfiger, helping these companies launch new divisions as they pivot their way into the fields of fashion tech start-ups. Although his career post-college was one imbued with style and fashion, especially as he lived in one of the fashion capitals of the world, New York City. Pondering about what it meant to be fashionable at Harvard during his time there, Monoyudis remembered, “Being fashionable really had more to do with defining and expressing your personal sense of style rather than following the latest trends. I was always impressed by classmates who could find the diamond in the rough at the thrift store, pair it with some incredible vintage accessories, and create a truly original look.” In the 90s, a time where fashion risks were becoming popular and personal style was increasingly encouraged, students began to be liberated in their style, fostering self-expression and diversity. And we see this continuing on until today– whether it be neon, track suits, or tye-dye, many of these 90s trends are making a reappearance today, in both apparel and spirit.

Tynan Gabriel Charles Jackson ‘20, a current student at the College, is an encapsulation of this phenomenon. Fashion paves the way to some of his favorite moments– he “love[s] to step into the classroom and disrupt the normality of mainly reserved, grunge fashion and be rebellious” while wearing “tight clothes, shiny jewelery… very street pieces.” Harvard fosters an environment that gives high regard and status to corporations and professionalism, and Jackson views streetwear as a tool to “disrupt [this] in a way that yields me space to thrive… even to some professional events I’ll wear the most casual professional/business outfit.”

His favorite look is his bright green Adidas tracksuit– a statement color, an athletic touch, a neckline that emphasizes whatever jewelry he wants. It’s modern-day Harvard fashion.