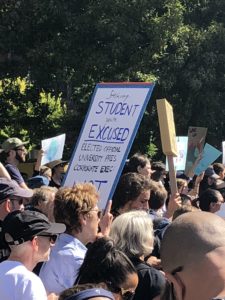 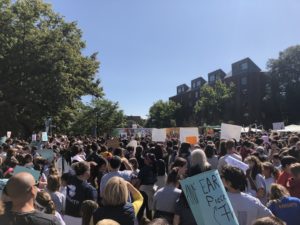 The divestment movement has reigned rampant amongst the various schools at Harvard, particularly at Harvard College. The Harvard Undergraduates for Environmental Justice (HUEJ) has pursued its mission to mobilize the community– at Harvard and beyond– to protect the resources and ecosystems of our planet through environmental education and activism. They have spearheaded the Divest Harvard movement, advocating for the removal of investments (direct ownership, shares, corporate bonds, etc.) from fossil fuel industries which are significant contributors to climate change. Though HUEJ was founded in 2012, it was revived in 2018 in light of the pressing urgency to divest. One of their inaugural actions involved penning a letter to President Bacow, asking to meet with him and the Harvard Corporation to examine fossil fuel divestment. The members of HUEJ recognize their organization to be a powerful force in enacting environmental and political change for their future.

The movement believes that, through the divestment of capital, Harvard will in equal parts symbolically and financially slow the fossil fuels industry. In the words of HUEJ, it is critical that Harvard divests in order to “show the country and world that we refuse to be complicit in the industry’s continued war on human and environmental health.” Hosted Friday, September 20th in the Science Center plaza, HUEJ organized a climate strike. The crowd was initially sparse, but then at around 11am– in the class time slot of 10:30-11:45am– three large groups of students came marching over to the stage set up by HUEJ. Over the next hour, students walking through the area seemed to stop and stay for a few minutes. Ultimately, HUEJ rallied approximately 1,000 students, faculty, staff, and community members.

Professors and students flooded the stage to speak of seas rising, the planet dying. Former U.S. Environmental Protection Agency administrator Gina McCarthy alongside high schoolers attending Rindge and Latin, energized the crowd, each generation sharing a uniform message. Children alongside grandparents held up homemade signs indicating the different world their children would live in. This HUEJ strike in particular aligns the organization with global protests by school children to protest the inadequate response of governments to fight climate change. The hour-long rally came immediately before the larger Climate Strike in Boston and many protestors joined HUEJ in their procession from the Science Center Plaza to the Harvard T station, embarking to Boston’s City Hall Plaza to continue the fight. Others returned to class.

One first-year who agreed to a brief interview with The Harvard Independent had a few thoughts to share about the rally.

Q: Could you speak briefly to what brought you out here/how you heard about the event?

A: I’m a freshman at the college so…I got lucky: I just looked out my window and there this was and here I am.

Q: Do you think the proximity of the event, so close to the science center, has drawn a lot of Freshman here who may not have known of the event?

A: I don’t know how much outreach there was in the houses, but I didn’t see much come by my way in the dorm- just a flyer or two. At the end of the day though, the event is literally at our doorsteps – so those who care will come out and those who don’t, won’t.

Q: As a freshman, new to the college: what’s your impression on the state of student activism on campus? Quantity and quality wise.

A: Quality wise, I’m fairly impressed. Everyone seems fairly organized and you can easily tell the people running this care a lot and are really invested – even the people walking by who just stop and stare for a bit are drawn by that too. Quantity wise, I’m honestly a bit surprised. I’m from the west coast and I’m used speaking up about what I care about – I figured things might be a bit more “hush hush” in the northeast and especially at Harvard, but I’m excited by what I’ve seen so far!

Critics of the movement, however, maintain that attacking the allocation of the endowment is not the most effective tactic for enacting social change. Ergo, bowing down to the demands of student-protestors is not something to which President Bacow needs to assent. Following his inauguration, President Bacow has not avoided participating in the climate change discussion, choosing to acknowledge the movement in several interviews and during the First-Year Convocation. In September 2019, the President published an article entitled “Facing up to Climate Change” in the Harvard Gazette. He aligns himself with the strategy of Harvard’s previous presidents, that “engaging with industry to confront the challenge of climate change is ultimately a sounder and more effective approach for our university.” While the President verbally empathizes with their protests, citing that he “respect[s] the views of those who think otherwise,” he maintains institutional loyalty to the Harvard Management Company, of which he is a board member.

The Harvard Management Company (HMC), those who invest the endowment of Harvard, was founded in the 1970s. HMC has accumulated its power through the thousands of members it enlists, strongly outperforming compared to the average portfolio. Consequently, the company has been able to generate billions of dollars back to substantiate Harvard, leading to growth in funding for financial aid, art preservation, campus libraries, scientific research, and even the environment. Therefore, in consideration of the financial boons investments in the fossil fuel industry affords, many at Harvard have a clear justification for taking an apolitical stance on the matter.

No matter the present discourse on divestment from fossil fuels, HMC has ostensibly improved its framework for environmentally sustainable investments. Their website contains an updated list of five guiding principles that the HMC will consider while in the process of investing: protecting environmental sustainability, respecting human and labor rights, conserving existing land and resource rights, complying with local laws and upholding the highest ethical standards, and reporting on activities and progress toward implementing and promoting the principles.

HUEJ refuses to concede to only purported guidelines. During Opening Days, Divest Harvard respectfully protests at the First-Year Convocation where over 30 activist first-years steadfastly grasping orange “DIVEST” signs, unwavering, where President Bacow spoke. HUEJ strives to persuade Harvard to remove their endowment from these unsustainable companies by April 22nd, 2020– otherwise known as the 50th Anniversary of Earth Day.

Graham Walter (grahamwalter@college.harvard.edu) is News Editor for the Indy.