A Symbol for Something

By AIDAN FITZSIMONS and TUSHAR DWIVEDI 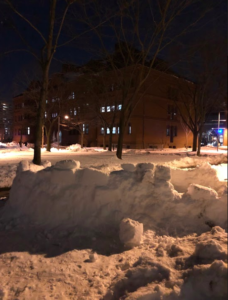 A: On Monday, we had a snow day. We didn’t have an actual snow day, but it snowed a lot, and we definitely had a day.


J: Snow slushing under my weary, somewhat raggedy boots, I made it to Pierce just before 9am, unwilling to risk a shuttle ride that sometimes left me a few minutes late for class.

A: I had a ton of reading to do, but I decided that I didn’t want to let Harvard control all of my time, and I was missing that joyous feeling of waking up to a beautiful snowstorm knowing that school was cancelled. So I cancelled school for myself.

J: Nearly half the class was empty, I disappointedly noticed. I never understood the people who didn’t go to class, snow or not; we’re at Harvard, how could you possibly not attend class I hazily wondered…as I slowly nodded off in my cozy back corner of the room.

A: I had recently obtained an old US Post box, and I had the spontaneous thought that it was the perfect size for making snow bricks. In full winter gear, with my awkward boots and old snowpants, I trekked out to Widener Library with my box at five in the afternoon. After sledding a few times on the Widener Steps, I selected my spot and began to scoop snow with my box. I would kneel in the snow, drive the edge of the box into the thick snow, drag the box toward me, and smoosh the box full of packed snow. Then I’d settle it into shape, flip the box over, smack the sides to separate the block from the box, and boom, I’d laid a brick. After laying an ambitiously large circle of bricks, I began to build up my wall, piling bricks on bricks while filling in the gaps with loose snow.

J: On the walk back, I stopped briefly to appreciate the crystallized ice on a nearby tree and to let the dramatic aura of Harvard, the science center, Annenberg, the Yard, and everything around it wash over me. I did that from time to time. I was attending the Harvard University, as I had to remind myself from time to time; not in a way that made me feel big and egotistical, however, but reminded me that I was small in comparison to those who’ve walked these paths.

A: I ate dinner, and returned to the site with my friend Kenneth. Kenneth brought a music speaker, and we had an amazing time building our fort (which we idealistically swore would eventually become a full igloo) together. Over the six total hours on Monday during which I labored on this fort, over a hundred people stopped to admire, take a picture, or offer words of encouragement and appreciation; a half-dozen or so even joined us to help for a while. I made a lot of new friends building that fort. By the time Kenneth and I finally left the site, after 11 pm, we had built a solid fort. It was a well-constructed oval that could fit at least a dozen people in it, and the smooth, strong walls reached three to four feet high. We left very proud, and ready to return to the task on Tuesday, after a long night of attempting to catch up on homework. Our backs ached and my knees were in startling pain, but it was undoubtedly worth it. We were going to make it the coolest igloo ever.

J: I paused while walking through the yard later that day, looking curiously at a half built igloo standing almost three feet high. A slight pang could be used to describe what I felt in that moment; nothing egregious or dramatic, but a slight twinge reminiscent of when I was young and I noticed the smallest bit of resigned envy. I reached down next to the igloo, placed a small handful of snow on the exterior, and neatly patted it down.

A: Tuesday morning, on the way to class, we discovered that some vandals had smashed in two large segments of our beautiful wall. They apparently had tried to kick down more of it, but the packed snow was too solid, and they gave up; their extra minute of kicking was apparently not worth my hour of packing. They also took my trusty box. I was really sad to discover this destruction.

J: I stood by the broken igloo for a long time. For the briefest of moments, I was wildly upset and could feel the blood rushing through my ears. That quickly faded however, and what was left was an emptiness not quite unlike the hollow interior of the igloo.

A: I spent another hour this afternoon trying to salvage the damage, by grafting the debris onto the strong parts of the wall in order to pivot towards a smaller half-igloo, but it didn’t work very well. The packed snow and new snow didn’t fuse easily, and the new snow was hard and clumpy by then anyway. It’s looking like the fort may remain a beautiful ruin. It’s still pretty impressive. Kenneth and I will return to it again this week to continue the operation however we can; it remains to be seen whether we will be able to accomplish our igloo dream, or whether we will have to resign ourselves to waiting for the next snowstorm. I remain hopeful, even if a little saddened by the setbacks. After all, building the snowfort allowed me to share a smiling connection with dozens of new and old friends.

J: I watched a guy around my age working to restore the igloo. After he had gone, I walked slowly up to the broken igloo and took a picture. I like looking at that picture, and I’m not really sure why. Some people might say it’s a symbol for something, but all I know is that it feels good.