Drones and Exams and Planes, Oh, My!

I was slated for the last exam on the timetable, forced to experience the sluggish days of reading period and exam week in the fall semester. The weather was bitterly cold, the campus slowly becoming deserted, and every ounce of Harvard’s social life was surrendered to the promise of good grades. It was an experience that could never be found enjoyable, so that as the day of my last exam approached, all that could keep me going was the thought that I would be heading home to England so very soon.

As an international student, flights have to be booked well in advance, meaning that, often, days to fly have to be chosen that turn out to be inconvenient, for the sake of saving money or avoiding potential conflicts.

But this time around, I had lucked out. Not only had I found a flight so cheap that I could book an extra bag of luggage without having to worry about the price (an unexpected luxury), but I was also able to upgrade myself to the airline’s questionable ‘Premium’ rate, meaning my six hour flight would be made more “comfortable” with a meal and refreshments.

As I said, questionably “Premium;” but this wasn’t just going to be any flight home – it was to be a whole new experience into the realm of “the elite” in long-haul budget airline flying.

As I woke up the morning of my final exam, my departure that evening was the more pressing matter on my mind. Neurobiology had stopped interesting me from the moment reading period had begun, and so it was through routine that I scrolled through my morning twitter feed, learning updates on everything that had been happening in the 5 hours that I had been asleep as England was awake.

What I saw made me stop, disbelieving what I was actually reading. All flights to and from Gatwick had been cancelled? The airport was currently shut down? All because of a drone?

I didn’t fancy my chances – one thing everyone should know about England is that when there is some kind of national crisis, the government will generally succeed in making it significantly worse before making it in any way better. With this in mind, I speedily made the decision to cancel my flight and book an alternative route through Shannon in Ireland, landing in another airport in London instead.

More expensive, no premium experience, but also no drone, guaranteed. With this in mind, I waved goodbye to my once-in-a-college-student–life-time experience before inducing a bit of pre-exam adrenaline as I ran to the Science Centre to make it to my exam on time.

I count myself lucky in this experience – I got home in the end with only an hour delay and later got a refund on my cancelled flight.

Others I know were not so lucky. With so many British students at Harvard, it is inevitable that some would get caught in the fray of airline panic. Two freshmen found themselves diverted to Paris at three in the morning, with no explanation for what had occurred other than social media updates. After spending (uncompensated) money on trains and ubers, they finally made it back to London, with a delay of ten hours and a night of sleep missed.

One of them only just made it back in time for their sister’s 21st birthday, and was forced to spend over three hundred pounds in the process.

The spectacle of the Gatwick drone continued over a span of three days, affecting over 1000 flights and 140,000 people. Whilst not only highlighting the fragility of many international airports to an attack such as this, it also showed the ineffectiveness of British security staff when responding to unprecedented events such as this one.

Whilst I know that I should count myself lucky that I made it home at all, I’m still not giving up the hope of one day being able to fly home with the luxury of an on-board meal and extra luggage. For now it looks like I, along with everybody else in England, was beaten quite dramatically by a drone, something we might just have to start getting used to. 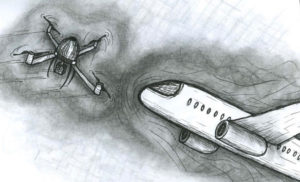 Mimi Tarrant ‘21 (ameliatarrant@college.harvard.edu) advises students to not let the drones keep them down.