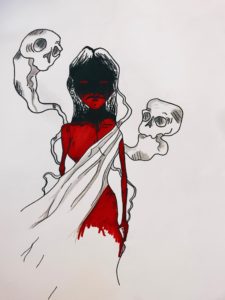 Jo Roberts is not confined by a medium. The freshman from Washington, D.C. explores materials and styles in her art freely and with marked skill. Fluidly translating her preferred subject of portraiture from graphite to acrylic to photography, Jo’s artistic abilities extend from the two-dimensional into musical composition, costume design, and theatrical direction. 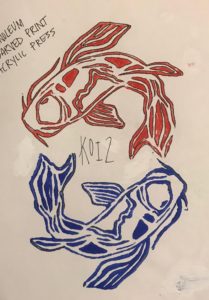 Jo has been drawing since the early age of five, encouraged by her parents with sketchbooks and what she considers to be feigned praise. Whatever the case, she stuck to it, and her work improved and became more complex over time, as she incorporated stylistic influences and experimented with new media. “I started doing cartoons in middle school. It was a new style I discovered and it looked fun, and the only way to get good at something is to work at it, so I drew a lot of those.” 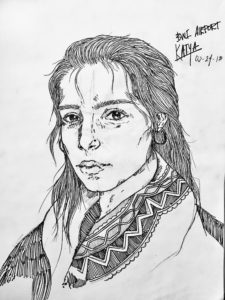 Asked about her influences, Jo lights up and says, almost reverently, “Hayao Miyazaki! I have his movies right here!” Rifling through her in-dorm DVD collection, Jo describes how her childhood passion for Miyazaki films developed not from an interest in the plot, but a mystical admiration for the artistic styling, specifically in the portrayal of lighting in dark spaces.

But sketching is just one of Jo’s many creative outlets. She calls digital and film photography her preferred means of creating portraits. Having been instructed in both in high school, she drew on the influence of fashion photographers such as Richard Avedon and Annie Leibovitz, the latter for whom she interned last summer. Working with one of the masters in her field at high-intensity shoots, Jo’s take away was that “professional photography is not all fun and games. A lot of things can go wrong, and it’s about learning to work on your feet and solve issues as they come.” 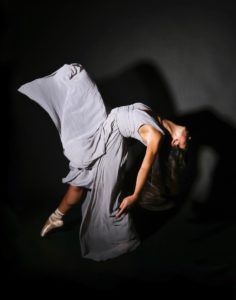 13-hour days did not dampen Jo’s love of photography, and she continues to work primarily in that medium, shooting on a Canon 80D for digital and a Canon Rebel S for film. However, the next step for this eager and talented artist comes as a surprise. Jo intends a pre-med concentration in neuropsychology, though she will likely pursue a secondary in VES. Her career ambition is to work for Weta Studios in New Zealand as an FX artist. 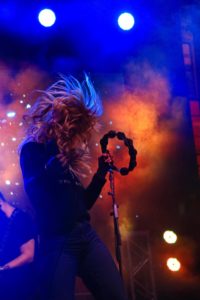 Asked about her high school arts experience, Jo admits that she did not go to a particularly creative institution, but prides her teachers on supporting her growth nonetheless. During photography classes, she would often listen in on drawing and painting lectures going on next-door and follow along with the instructions. Her only other formal drawing education comes from YouTube videos, making her work all the more impressive. 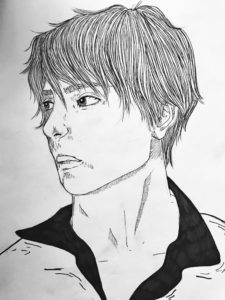 Special effects makeup, apparel design, and direction are just a couple more casual items on a list of Jo’s talents. Nonchalantly displaying a red and blue lithograph from her sketchbook, Jo describes seeing printmaking materials online and deciding to create her own. “I bought a block of linoleum and an X-Acto knife and then drew a design free-hand on the linoleum, then carved out the negative space.” As unconventional as she is inventive, Jo is a savvy and energetic artist whose potential is not constrained by lack of creativity or desire to experiment. I can’t even imagine what she’ll do next, but I’m excited to see it. 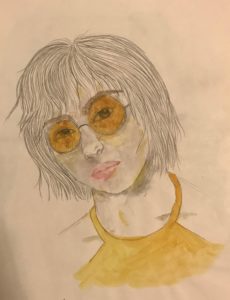 Jo Roberts is a freshman living in Grays Hall. Jo went to school in Washington, DC before coming to Harvard, where she plans to follow a pre-med track while taking art on the side. Her Instagram (@jomakesart) showcases her recent creations across media. Jo is also a lyricist and musician who is currently teaching herself guitar. She hopes to continue directing and designing costumes for theatrical productions during her time at Harvard.