A Message to Young Voters

While voting memes are hilarious and fun to share on your social media accounts, remember that you actually have to get out there and vote to elicit real change.

Memes have truly taken over the internet, and when politics are added to the mix, they get darker and even more entertaining. But memes don’t win elections. Sharing meme posts won’t get the politicians you want in office, but getting yourself out the door and voting will.

That doesn’t mean memes aren’t important in our political climate though. Political meme sharing has become a way for the younger generations to come together and make light of some of the more serious issues in today’s political climate. They convey the collective despair, humor and wit of an entire generation.

Here are some of the more popular political and voting memes circulating the internet lately. 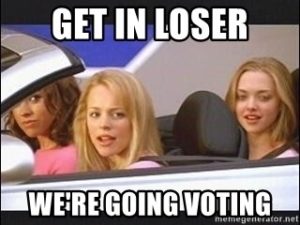 This meme is based on an image from the movie Mean Girls. The original quote, “Get in loser we’re going shopping,” is one of the more iconic lines from the film. In all, this one meme is a classic. What better way to make voting more mainstream than to make it seem like even the formidable Regina George gives a damn about voting? It doesn’t hurt that this meme is a bit of good peer pressure, either. 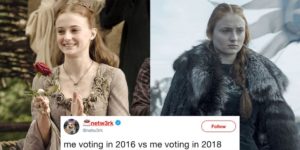 This meme has origins on the widely popular T.V. show, Game of Thrones. The meme shows one of the characters, Sansa Stark, who has high hopes for her life in King’s Landing, but after enduring many extreme hardships she is determined to take matters into her own hands. Like Sansa, many young voters seem to feel that their voices were left out in previous elections, bringing much hardship and turmoil into their daily lives. We can probably count on seeing voters at the polls that feel just like Sansa embarking on a quest to change her own fate. 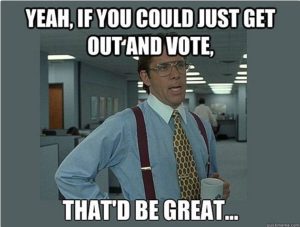 This is an iconic, sarcastic, non-confrontational, passive aggressive quote from the movie Office Space. “Yeah if you could just do ____, that’d be great,” is probably one of the more perfect examples of a motivational meme format, due to the levels of sheer frustration the image and word-combo convey. We’re lucky to have this meme floating around, motivating young voters to get away from their lives for just a bit and vote. 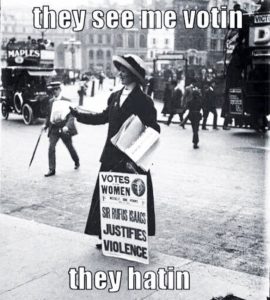 Ah, yes, another great meme. This one particularly hits home in light of recent femme-motivated movements, such as the #mettoo movement and the Women’s March. Every year women in the U.S. have the right to vote to make their voices heard, every vote a middle finger to the faces of those who’d want to take that right away. This meme perfectly captures that feeling. 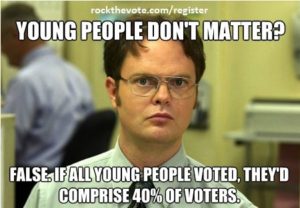 In this meme we have Dwight from the Office asserting some of his classic facts. He’s not wrong, either. The people sharing this meme really need to go vote! 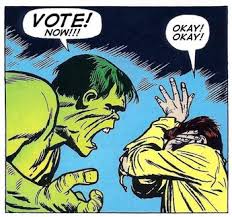 The Hulk epitomizes our frustration here. How many times do we have to repeat it? Voting is important, and every vote matters! This is especially directed at those who’d rather rant about voting on the internet than actually go and make a change.

Your internet activism must somehow transition to the real world in order to be effective. You can attach your online presence to a social or political movement, but here — truly fulfilling your civic duty comes from casting your vote. Happy voting!

Jaycee Yegher ‘21 () really wants people get up and go vote.