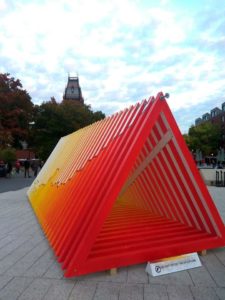 What in the world is that? Officially it’s an ‘’educational installation at Harvard University that combines science, art and environmental design to communicate global climate change data’’. The designers, Harvard Bullard Fellow David Buckley Borden and Harvard Forest Senior Ecologist Aaron Ellison, have created a quite intuitive piece of modern art.

Upon the inaugural event for the opening of the art installation in the Harvard Common Spaces, in front of the Smith Campus center, Aaron Ellison was explaining how the structure has been made to reflect light in a manner particularly pleasing to the eye. Indeed, it has come the time of needing such embellishments for the reports gorging with scientific data incomprehensible to the insensible eye.

Some might be wondering what happened to the initial design, where blue, the hue of the sky, were to cover the regions which are now simply white. This decision was made upon two considerations: first, the empirical revelations of a smaller experimental design, exposed beforehand and appreciated as is. Second, the sustainable choice to spare a few gallons of paint.

The structure presents two pieces of information, leaning against one another in the form of large triangles, made from wood collected at the Harvard Forest. The piece is highly impregnated by the recent IPCC report statements, which stirred up the community of environmentally conscious and concerned people. The data represented on the North side of the structure, towards the Science Center, eloquently depicts the increase in global temperature from 1880 to 2016. The yellowish bump perceived in the graph, towards the middle of the beams, might be, according to recent hypotheses, due to the industrial uproar of the Second World War. On the other side, the spectator becomes involved as an actor in the piece, for it represents 4 possible courses of action for our world’s continuation. The four striations of black to white represent concentration of carbon dioxide pathways. The top line represents the continued emission pattern, business as usual. The second, the Paris agreement goals. The third, the more aggressive CO2 emissions cut approach, by including a complete shift of the agricultural production. The fourth, the most radical cuts in CO2 emissions to be made, in order to not cap an increase of 1.5°C until the end of the century.

Interestingly enough, to really engage each passerby in their aim, Borden and Ellison have installed, at the end of the construction, a bench make of wood beams, covered in primer and ready to be assembled, for the fate of our future truly depends on what our societies will collectively achieve in the coming decades.

Ana Nicolae (analuiza_nicolae@college.harvard.edu) continues to ponder where those beams will take us next.