Take a trip to one of STAHR’s open houses at the Harvard Loomis-Michael observatory on a clear night (or get that coveted swipe access and go on your own time) and look up at the sky. Up there, that’s the realm of improbability. There are Wolf-Rayet stars frantically ejecting their atmospheres; exoplanets with orbital periods measured in mere hours. There is a certain suspension of disbelief that accompanies the study of the cosmos. So if I told you that an exercise in economic theory was taking place up there, in space, would it really be so surprising?

This is a story about space, regulation, and politics. No – I’m not reviewing the Star Wars prequels. This is the story of an effect far more important than massive fan disappointment: regulatory races to the bottom.

Introductory game theory provides a good base to begin thinking about these sorts of scenarios. In the oligopolistic model of Bertrand competition, rival agents compete to sell substitutable products by decreasing prices to undercut their rivals. The game ends when the firms hit their marginal cost, at which point the firm with less overhead wins out and captures the whole market. Victory goes to the cheapskate – but in many cases it’s pyrrhic. 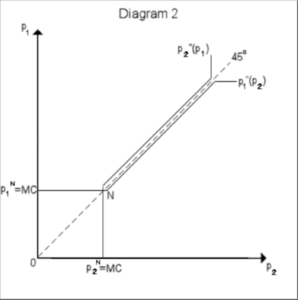 Price-based competition doesn’t just blow up rockets. I’ve found a whole host of situations, mainly in politics but with tendrils deep in several different fields, where attempts to be the “cheapest” option on the market has negative consequences as serious as they might be unintentional. In political spheres the oligopolistic, price-incentivized nosedive has a name: “race to the bottom”. In this article I cover two examples and offer a possible solution derived from basic economic theory.

Like many business-minded folks with an appreciation for aerospace and futurism, I was excited by the Space Resources Exploration and Utilization Act of 2015. For the first time, a major world power offered legal protections for private entities with off-world mining operations. It was also exciting for fans of philosophy. The rights of resource extractors were partly derived from Locke’s definition of property rights. If Locke were thrown into the modern political environment, he’d say something like, “what you mine is what you own”. And that’s the stance the U.S. assumed: you want to mine an asteroid, fine; you can’t own the whole rock, but you can own the little rocks you pick off of it, through your own (likely robotic) sweat and toil.

Surely everyone was in favor of this development, right? Not so much. See, the U.S. had essentially unilaterally declared legal protections that blatantly circumvented the UN Committee on the Peaceful Uses of Outer Space (COPUS). That ticked off the Russians and many other nations that collectively saw the looming shadow of the old economic bogeyman: the price war. Or as we’ve come to know it in the political context of this article, the “race to the bottom”.

Luxembourg played the next move in the regulatory game. They goaded international asteroid mining companies with the promise of less security screening for their missions, which was meant lower costs than the U.S. could provide. Doing any sort of operations in space through the U.S. is notoriously difficult, thanks to rigorous checks conducted by intelligence and military agencieslacing cameras and other neutral vessels in space constitutes a national security threat if you can’t ascertain the intentions of their operators. So U.S. agencies are rightly rigorous. And the international community at large also isn’t too keen on opening the floodgates to unchecked activity in space. It seems, then, that we’re stuck in the downward spiral. Marginal cost is nowhere in sight but conceivably it does exist.

The same effect occurs with workers’ wages in the developing world. I want to go back to economic theory for this example. Let’s take a look at the competitive market for labor.

In a competitive market, where you have a single tier of labor and companies value each unit of that tier equally, the price of labor determines how many units the firm can afford, and how many laborers will willingly join the firm at the set wage. 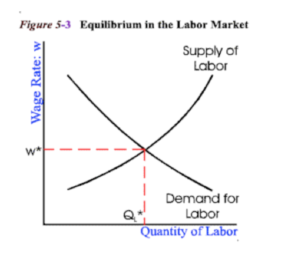 Simple enough. You like your wage, you join the company. Now let’s move this example to the real world. As we know, the economies don’t exist as isolated systems. China’s labor market, for example, is – for the most part – open to multinationals based out of the United States and vice versa. If you’re an American company, you’re suddenly faced with not one, but two supply curves. And this creates a lowest-bidder’s game played by regulators on both sides of the world: deregulation, for example, lessening the frequency of safety inspections at coal mines, can lower the price of a country’s coal miner, and in turn coal mining companies (or customers that use coal as an intermediate product) benefit from boons in margins and demand. Cue a “race to the bottom”.

But we know that in general equilibrium the race has a finish line; or at least a place where one of the runners breaks an ankle and stalls. If other markets are available, workers can (in theory) jump ship to an industry with higher wages. There are other, obvious, practical limits. You can’t work a coal miner or whoever into the dirt. It kills productivity for the individual and also trashes collective morale.

SSC had an excellent anecdote about the unusual and inefficient nature of American slavery that illustrates my point (here’s an excerpt):

Imagine a profit-maximizing slavemaster who decided to cut costs by not feeding his slaves or letting them sleep. He would soon find that his slaves’ productivity dropped off drastically, and that no amount of whipping them could restore it. Eventually after testing numerous strategies, he might find his slaves got the most work done when they were well-fed and well-rested and had at least a little bit of time to relax. Not because the slaves were voluntarily withholding their labor – we assume the fear of punishment is enough to make them work as hard as they can – but because the body has certain physical limitations that limit how mean you can get away with being. Thus, the “race to the bottom” stops somewhere short of the actual ethical bottom, when the physical limits are run into.

John Moes, a historian of slavery, goes further and writes about how the slavery we are most familiar with – that of the antebellum South – is a historical aberration and probably economically inefficient. In most past forms of slavery – especially those of the ancient world – it was common for slaves to be paid wages, treated well, and often given their freedom. …  Sometimes the slave would work a job at your workshop and you would pay him wages based on how well he did. Other times the slave would go off and make his way in the world and send you some of what he earned. Still other times, you would set a price for the slave’s freedom, and the slave would go and work and eventually come up with the money and free himself.

Moes goes even further and says that these systems were so profitable that there were constant smouldering attempts to try this sort of thing in the American South. The reason they stuck with the whips-and-chains method owed less to economic considerations and more to racist government officials cracking down on lucrative but not-exactly-white-supremacy-promoting attempts to free slaves and have them go into business.

So in this case, a race to the bottom where competing plantations become crueler and crueler to their slaves in order to maximize competitiveness is halted by the physical limitation of cruelty not helping after a certain point.

Politically it also isn’t great (or sustainable) for populations to remain confined to hopelessly penniless lives of coerced labor and artificially depressed wages. Politically an unwise move. Things like that start rebellions, you know.

So there’s a floor to deregulation, and it’s somewhere around the point where it significantly destabilizes national interests – a point where the cost of removing protections outweighs expected economic gain.

For asteroid mining I think that lower bound is a major threat to the security of some powerful group’s orbital assets. That may be the NRO. Or the U.S. Air Force. Or a consortium of nations or multinationals. The bigger the threat (like an irreversible orbital collision cascade) the more agents will be affected and push for regulation – or for satellites to be shot down. At that point Luxembourg or others will have to contend with the risk of being branded sponsor non grata both by the self-interested collective of threatened agents, and by the companies or individuals producing the threats, which will at some point be abandoned by their sponsoring nations.

Jose Espinel ’20 (espinel@college.harvard.edu) is excited to keep bringing Harvard Econ to the stars.