A description of a Women’s Week event

This week, barriers are being broken every single day due to Women’s Week. Many of Harvard’s most prominent women’s groups on campus are participating in the event, including the Harvard College Women’s Center, and the Radcliffe Union of Students (for a full list of participating organizations, check out the Women’s Week Facebook Page). 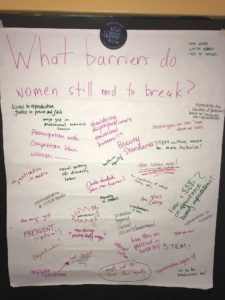 This week I attended one their events, Against Sexual Violence at Harvard: Then and Now! hosted by Our Harvard Can Do Better and the Radcliffe Union of Students. One of the first things I saw upon entering Ticknor Lounge was a huge sign asking the question: What barriers do women still need to break? The answers ranged from “objectification in media” to “time + $$$ spent on appearance? Beauty standards?” to “Longboarding is cool.” 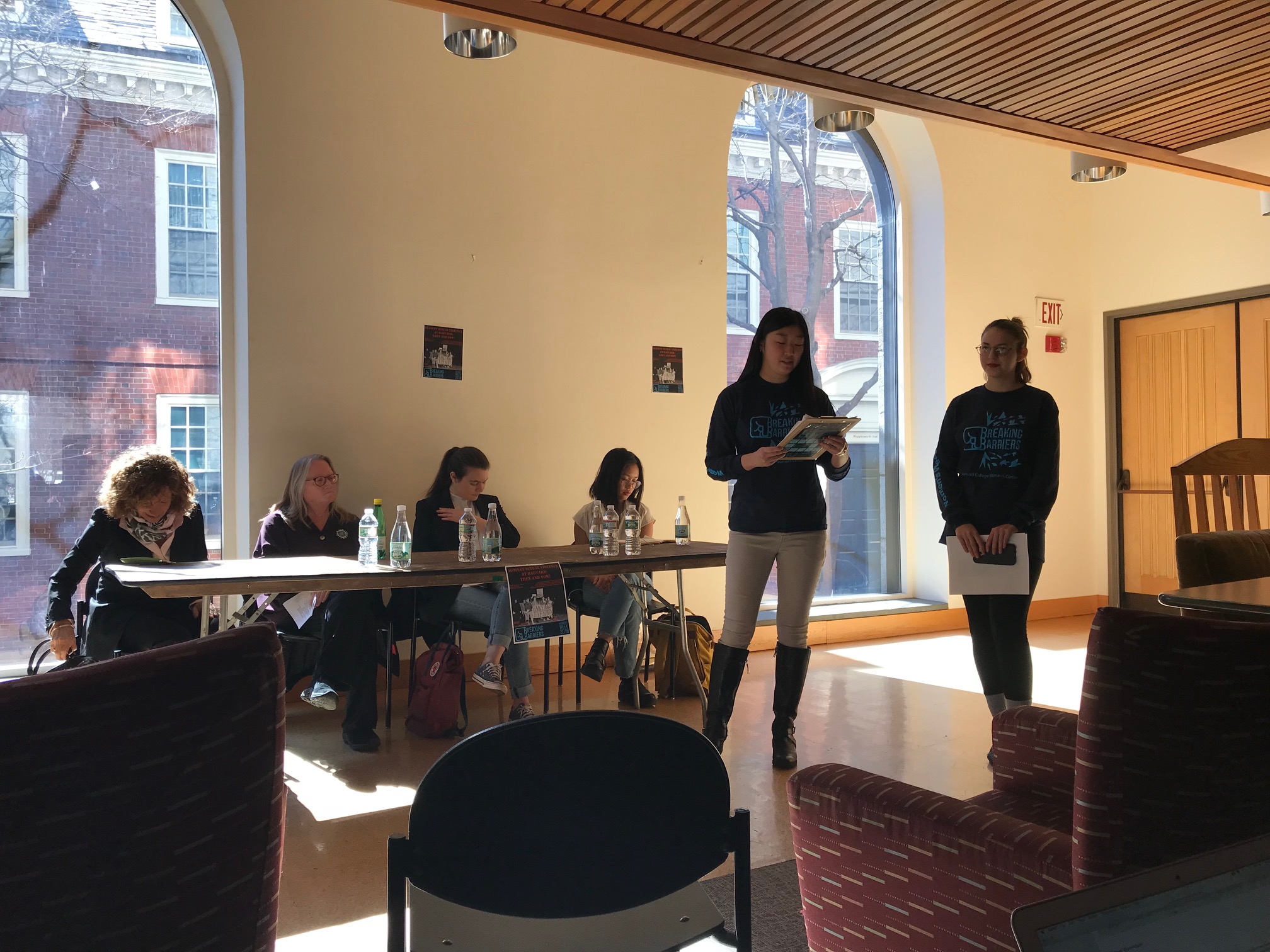 The panelists for the event continued to answer this question by providing their thoughts and ideas on the matters of sexual assault and rape culture on campus.

With every question they answered, each panelist described experiences of feminism and anti-sexual assault activism on campus that differed vastly.

Professor Rosenfeld began by telling us where her experience with fighting against gender-bias and the like on campus began, detailing her involvement with the Coalition Against Sexual Violence. According to her, their goal when she first began was to work with local law enforcement to stick to a three-pronged standard of approaching sexual assault that included: Prevention of sexual assault, Responding to cases of sexual assault, and Resolving cases. She told the audience that one of the most difficult issues they faced was getting the law enforcement to hold assaulters accountable.

Professor Rosenfeld also told us about how she has used her legal experience in the past to combat sexual assault on campus. She explained in detail how one of first Office of Civil Rights Title IX cases was filed against Harvard in 2002. At the time, the Dean of students told survivors to go to the law enforcement because school wouldn’t use the Preponderance of Evidence standard to attempt to resolve sexual assault cases. Chuckling, Professor Rosenfeld told us that this didn’t go over well with the Student Body, and Rosenfeld herself had actually advised the Dean not to say that very thing.

When asked what current Harvard students should be doing to enact policy change on campus, Professor Rosenfeld said “We need to be on the radar of new Harvard President. Students need to be loud, be on his calendar, and be in his face.”

Some of her other notable quotes were (on intentional intersectionality): “you have to be intentionally open to other people’s voices and intentionally non judgemental.” She left us off by saying that “we have so much power now, to create the conversation on what sexual respect is.”

Shane Snowdon started off by making it clear that the feminism she had encountered as a Radcliffe student was much different from the feminism Harvard students experience now. While she was a student, Title IX didn’t really have a huge impact on her and her fellow undergrads, it was seen as only applicable to people in sports. “We were making this stuff [feminism] up for ourselves…we didn’t even dream of an Institutional response. All we had was each other.”

Some of the biggest problems she and her fellow feminists faced included: Ridicule for being a feminist, a lesbian, etc, Issues of communication – according to her, the word “rape” would result in people reeling back – they didn’t have the vocabulary to describe sexual assault the way we have today, and a lack of Intersectionality. Shane told us that, largely, the feminist groups she was a member of that battled against sexual assault on campus were among the first; and that for the most part, members were all white women, from same backgrounds. It wasn’t until they went out in community that they encountered other narratives of gender-based violence and discrimination. According to Shane, these were the most enlightening interactions. “Crisis brings great women together in really amazing ways.”

Emily Fox-Penner had a lot to say that went along similar lines, despite the generational gap. She became involved with Our Harvard Can Do Better in her freshman year. She described the challenges the organization (which began in 2012) has faced as being similar in some ways to those described by Shane. According to Emily,  “It is difficult maintaining student interest…the school had come up with strategies that waited us out.” People on campus often had no idea that there was change going on, and when they did, they often wouldn’t know what exactly was going on because Harvard would use language that often excluded students. She also told us that OHCDB faced issues with Intersectionality. Oftentimes in the past few years, the dominant voices on campus about sexual assault were of white, straight women. There was, and is, a need to have other voices telling their stories.

Our Harvard Can Do Better has been working to get Harvard and other comparable institutions to enact policy change by working with students. Emily said of the organization’s efforts, “We saw ourselves as part of a greater strategy on college campuses, using our Title IX complaints to get our message across.”

Marella Gayla, who wrote an article for the Crimson exploring the history of Sexual Violence at Harvard, spoke to her own challenges with getting the message across. According to her, it was difficult to research for the article because, “The language we use to talk about sexual assault changes generationally.” She detailed how she was strongly encouraged to not use the word “rape” in her article unless she was directly quoting someone. The switch to using the phrase “sexual assault” often translated into the questions she would ask Harvard Alumni not getting her the answers she needed.

She found herself grappling with the way we contextualize and define the words we use to describe sexual assault nowadays. She asked the audience, “If it’s not sexual assault…however we define that…is it still news? How do we report it?”

Marella also gave us her thoughts on how the #MeToo movement has affected intersectional feminism. According to her, #MeToo is explosive in a brilliant way because of social media, but it is also problematic because of social media. The ones that get heard the most are the ones with the followers, who often fit into one stereotype.

The Panelists finished off the session by describing their dream Harvard.

Professor Rosenfeld imagined a Harvard where all women hold each other up, not judging other women, a Harvard that is fully intersectional. She described it as an alternative structure to how the patriarchy expects women to behave.

Shane pictured a Harvard complete with a Women’s Center, BGLTQ Center, and a Multicultural Center on campus. According to her, Harvard is 20 years behind on this front. She told us, “We need to shame Harvard into getting more intersectional resources. Other comparable schools are so much farther ahead of Harvard. If you persist, that is everything. Demand better.” She also pictures a Harvard where women not afraid of being assertive, or defending themselves.

Emily answered with a kinder Harvard. She lamented that Harvard is not a place to really get support or ask for help. She envisions a Harvard that treats survivors fairly and treats survivors kindly.

Marella spoke of a Harvard that was better at communication.

Alaya Ayala (alaya_ayala@college.harvard.edu) is hyped to attend other Women’s Week Events and excited for coming out (again, but as a feminist,) on Thursday.