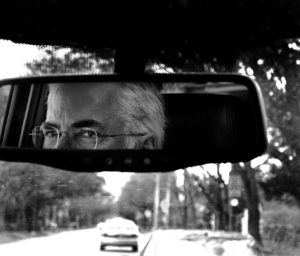 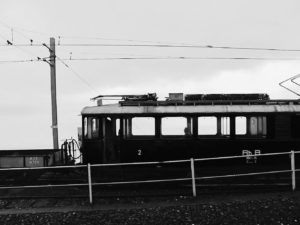 The photos pictured here were arranged months after I took them. The first photo pictures my father’s eyes in the rearview mirror. I took it last Thanksgiving Day, as my entire family was travelled to see friends for dinner. We piled into the car, everyone was fighting, and of course, we were late. I pulled out my camera to ~capture the moment~ and without skipping a beat, my father cast me a look in the rearview mirror, as to say, “put that camera away. now is NOT the time.” Obviously, I took the photo anyway. The second photo was taken on a backpacking trip in Switzerland a few summers ago. I was catching a train from Geneva to Gstaad, where I would begin my journey. The photo pictures another train, stopped on the tracks, with only one passenger inside. He is looking out the window at what was Lake Geneva, enveloped in a thick fog. I was intrigued by the lone man on the train, stopped on the tracks in the fog, so I pulled out my camera and took a picture.

Months later I was clicking through the photos on my camera roll and couldn’t help but notice the thematic and compositional similarities between many of the photos that I had taken. These two photos, for example, had interesting parallels that could be identified when the images were placed side by side. Since then, I have continued to arrange photos, and make pairings that I find to have intriguing similarities and connections. In the case of these two photos, I was drawn to the similar shape of the rearview mirror and train’s body and the likeness of the train’s windows and the lenses of my father’s glasses. While one subject is looking through the windows of the train, the other is looking through the lenses of his glasses. I was also interested in the shared subject matter of the two photos. The photos, in a way, mirror each other; each image features a mode of transportation, whether that be a car or a train, and each image details a singular older man as its subject.

Lucy Hamilton (lucyhamilton@college.harvard.edu) is a freshman living in Canaday. Lucy was born in Denver, CO but has lived in Barrington, RI for most of her life. After taking a photography class in high school, Lucy became acquainted with her medium. When inspiration strikes, Lucy is ready with her iPhone camera or her Cannon EOS Rebel T7i. Her Instagram (@lucifer_hamilton) and camera roll are filled with images of daily life made beautiful by Lucy’s artistic eye. When she is not taking fabulous photos, Lucy can be found rowing on the Charles river. She has rowed since 2015 and came to Harvard with intentions to continue her rowing career with the Harvard- Radcliffe rowing team.