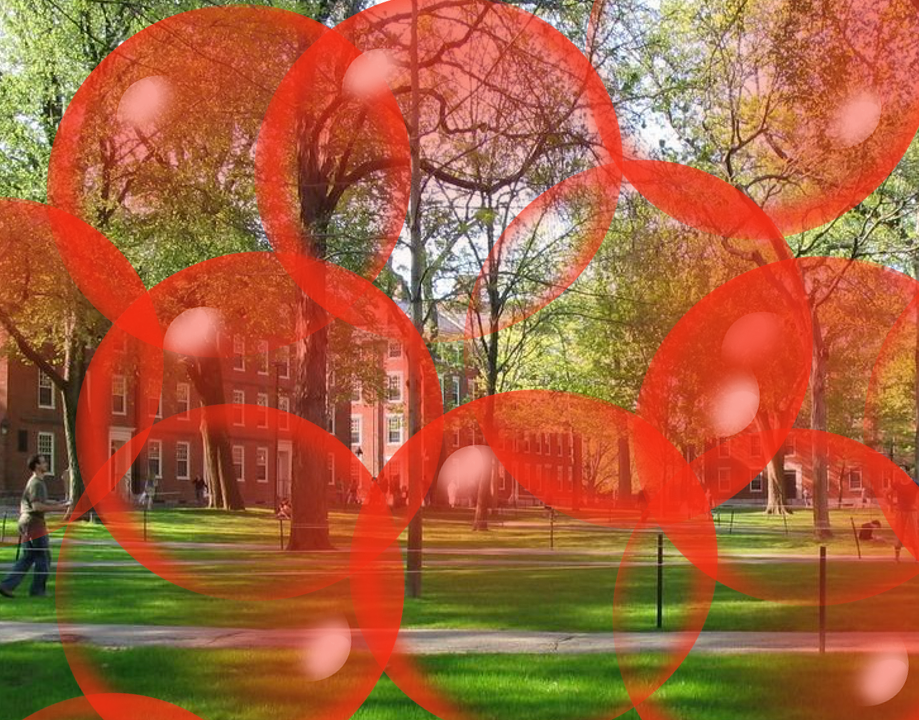 With the skyscrapers of NYC towering in the background, and the twinkling city lights slowly fading, I took an appreciative look around. Sitting uncomfortably on the rugged and rusty Megabus, I had managed to convince myself that I was a traveler, and that the 3am skyline view was a significant moment of clarity, one that could only have been had outside the dreaded “Harvard Bubble.”

As an curious senior in high school, it’s easy to recall googling: “Harvard Secrets,” and “Cool things at Harvard,” and reading wide eyed about final clubs that lost their luster and funky Adams tunnel that quickly became commonplace. The “Harvard Bubble” had become at synonymous with continuous work, and somewhere along the road, the connotation of the phrase had turned Harvard into a place meant to escape. As a result, as I sat in the bus hundreds of miles from Harvard’s campus, I felt a convoluted sense of pride, the wide-eyed freshman long gone.

Directly on the Harvard Official Admissions Website stands the article: “Breaking the Harvard Bubble”, attempting to convince students to step out and break free of campus, citing the fact that campus quickly grew too comfortable, and Boston too far away in our minds. But what exactly are students growing sick of? Lamont? Our rooms? The yard? The same, continuous cycle of redundancy that we’ve trapped ourselves into every day?

Seniors were the best to hear from: one looking back on his time at Harvard mentioned, “We’ve somehow reduced Harvard to the same four places we inhabit every single day. Of course we’re sick and tired of it. Harvard’s more than just classes, Jefe’s, and Cabot.” Another said: “You know, a lot of people claim that not exploring Boston or leaving campus more is their biggest regret. I just wish I’d done more here. There’s so much of this place I’ve never even looked at to be honest.”

“Man the Natural History Museum is incredible. Oh and the Semitic Museum too, right?” my newfound bus friend, who attended a nearby college, asked eagerly from the seat next to me, upon hearing where I went to school. I stammered out a “oh yeah it’s great man,” hoping it wasn’t too obvious that I only knew where they were on campus because of a long forgotten section in William James. In hindsight, it did seem strange that the only reason I knew of the world famous Yenching Institute was because of a class shopped and long ago dropped.

“So what is the Harvard Bubble I want to escape?” I asked myself on the trip back. The Harvard Art Museum, Symphony Orchestra, Dance Performances, and Squash? Or is it just the monotony of everyday work, spiked with a Harvard Yale game, or Yardfest? Of a survey of Harvard students from various river houses, a large majority had said they they had felt “trapped by the Harvard Bubble” several times throughout the course of the year. The same survey group also revealed that 60% of them spent at least half their day in their room, and as one student poignantly put it, his/her days seemed to blend together into one seemingly endless stream of “the same old same old.” There has to be more here.

Hundreds of miles away from campus, it silently hit me that I was nearly halfway done: with college, Harvard, Adams, and the tremendous amounts around me not yet explored. It took someone from outside the school to open my eyes as to what’s truly here on campus, and as I returned to Harvard, just a little bit of that wide eyed freshman came back with me.

Tushar Dwivedi (tushar_dwivedi@college.harvard.edu) is desperately trying to make the most of his time here.